Baghdad– A secular coalition challenging the Iraqi prime minister in the country’s historic parliamentary elections has narrowly pulled ahead for the first time in the overall vote count, although it still trails in the crucial province-by-province count.

The Iraqiya coalition, led by former Prime Minister Ayad Allawi, seemed to be gaining momentum, taking a 9,000 vote lead nationwide, according to new totals released late Tuesday. But with about 20 percent of the votes still to be counted from the March 7 election, it was unclear whether that margin would give Allawi more seats in parliament, which will determine who will lead the government.

The news came as Prime Minister Nouri al-Maliki and his State of Law coalition accused election officials of manipulating vote counts and called for a re-count, a candidate from his bloc said. It was the prime minister’s first challenge to the results, and his bloc drew a link between its accusations and Allawi, accusing some electoral commission staff of having allegiances to groups backing al-Maliki’s rival.

Iraq’s vote counting has been winding and chaotic, with ballot results being portioned out piecemeal by election officials and almost immediately subject to fraud accusations. The winner will be tasked with forming a government that will oversee the country as US forces go home.

Crucially, with 79 percent of votes counted, al-Maliki’s coalition was still winning in seven of Iraq’s 18 provinces — including all-important Baghdad — compared with five for Allawi. That could prove important since parliament seats are apportioned mainly by how well coalitions do in the provinces, not according to overall vote total.

Still, the momentum apparent in Allawi’s overall, nationwide lead could be troubling the prime minister and his coalition, raising questions about how strong their lead is.

The new vote results did not alter the picture much for the religious Shia Iraqi National Alliance and the main Kurdish coalition, which lead in three provinces each.

However, in the oil-rich and ethnically mixed city of Kirkuk, Allawi was beating his main challenger, the Kurdish coalition, by only five votes.

Allawi, a secular Shia, has drawn on considerable Sunni support, likely due to his nonsectarian stance and repeated condemnations of the influence of Iraq’s powerful Shia neighbor, Iran. Al-Maliki has drawn on support in the Shia south as well as in the capital.

With so much at stake, several leading candidates have raised accusations of fraud.

Before Tuesday’s tallies were released, Iraq’s prime minister accused election officials of manipulating vote counts and called for a re-count, a candidate from his bloc said.

The prime minister’s allegations surfaced in a complaint letter to Iraq’s Independent High Electoral Commission, saying al-Maliki’s bloc "received reliable information that supervisors of the electronic counting center" are linked to rival groups contesting the race, including some supporting Allawi.

Ali al-Adeeb, a candidate on al-Maliki’s slate, said his coalition is accusing the counting center of doctoring the numbers and is calling for a re-count based on tallies done in the country’s more than 50,000 polling stations before their ballots were sent to Baghdad.

The Associated Press obtained a copy of the letter, which is signed by al-Maliki. It says the political allegiance of the counting center’s supervisors undermines "their neutrality in administering such a momentous and crucial process" as the tallying of the votes.

The letter singles out Hazim al-Badri, the electronic counting center’s manager, claiming he is a member of a Sunni group allied with Allawi.

The letter also says the prime minister’s coalition has information linking employees recently fired from the counting center to the same group. It calls for an investigation into the political ties of all officials and employees at the counting center and argues that final results should not be released until all complaints are investigated — "however long it takes."

The counting process has been fraught with claims of fraud, mostly from the opposition. Others have criticized the electoral commission for disorganization and delaying results.

"Because it’s so tight, it’s more tense and you are going to see more allegations of fraud. People could try to use that as a political weapon," said Michael Hanna, an analyst on Iraqi affairs at the Century Foundation in New York.

He said al-Maliki’s allegations could reflect the prime minister’s coalition realizing their lead is not as strong as once believed.

"It’s hard not to be cynical about some of these claims, most of them actually," he said.

Electoral commission official Saad al-Rawi confirmed the commission had received al-Maliki’s complaint but said it was one of many to come in without concrete evidence. Al-Rawi said six workers at the counting center were fired, but for incompetence and entering incorrect data into the computers.

Independent Iraqi observers and UN officials advising the commission say they have seen no evidence of widespread fraud that could undermine the outcome, though some worry the slow count could fuel suspicion.

Others suspect al-Maliki’s complaints have less to do with fraud concerns and more to do with improving his position for the months of political wrangling likely to follow the release of official results.

No bloc is likely to win a majority, meaning the winning candidate will have to ally with rival blocs to form a government.

"Al-Maliki is not in control of the situation and the tighter the race, the more coalition building he will have to do once he likely comes out first," said analyst Toby Dodge with the International Institute for Strategic Studies in London. 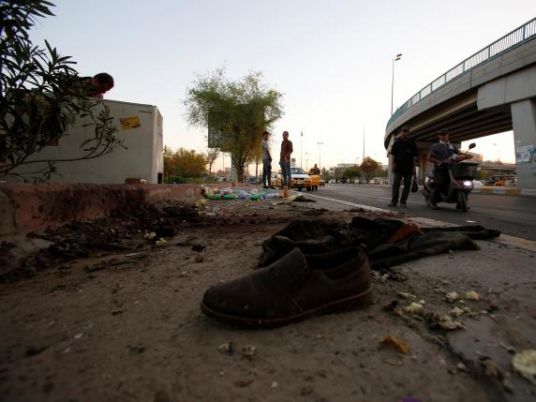 Explosions in and around Baghdad kill 12: police, medical sources

Bombs mar start to first Iraq vote since US exit