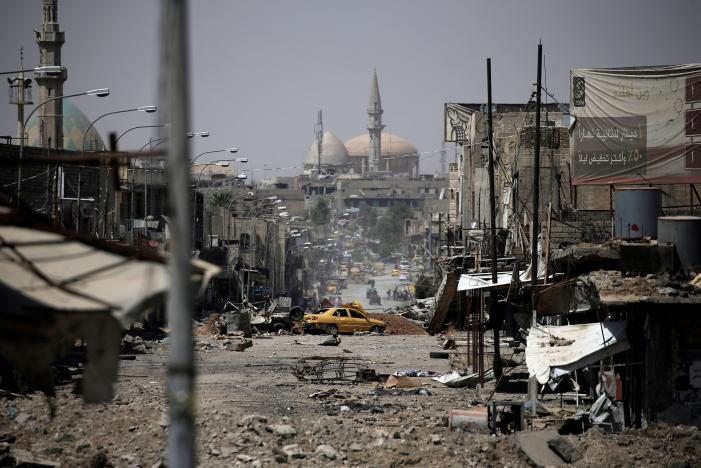 Tens of thousands of civilians in parts of Mosul held by Islamic State are struggling to get food, water and medicine, the United Nations said, days into a new push by US-backed Iraqi government troops to take the northern city.

She spoke a day after Iraq’s army said it had launched a new offensive to take the militant zones on the western side of the Tigris river.

Progress has been slow, an Iraqi government adviser told Reuters, also late on Sunday. “The fighting is extremely intense … the presence of civilians means we have to be very cautious,” he said, speaking on condition of anonymity.

People who had managed to get out of the militant areas “report a dramatic situation including lack of food, limited water and severe shortages of medicines,” Grande said by phone.

“We know that there have been health facilities in these areas, but we don’t know whether they are still functioning.”

Government forces have been dropping leaflets over the districts telling families to flee – but many have remained fearing getting caught in the cross-fire.

“We have been informed by authorities that the evacuation is not compulsory … If civilians decide to stay … they will be protected by Iraqi security forces,” said Grande.

“People who choose to flee will be directed to safe routes. The location of these will change depending on which areas are under attack and dynamics on the battlefield,” she added.

The latest Iraqi government push is part of a broader offensive in Mosul, now in its eighth month. It has taken longer than planned as the militants are dug in among civilians, retaliating with suicide car and motorbike bombs, booby traps, snipers and mortar fire.

Its prime target is the medieval Grand al-Nuri mosque with its landmark leaning minaret in Mosul’s Old City, where Islamic State’s black flag has been flying since mid-2014.

The fall of Mosul would, in effect, mark the end of the Iraqi half of the “caliphate” declared nearly three years ago by Islamic State leader Abu Bakr al-Baghdadi in a speech at the mosque.

About 700,000 people, about a third of the pre-war city’s population, have already fled, seeking refuge either with friends and relatives or in camps.