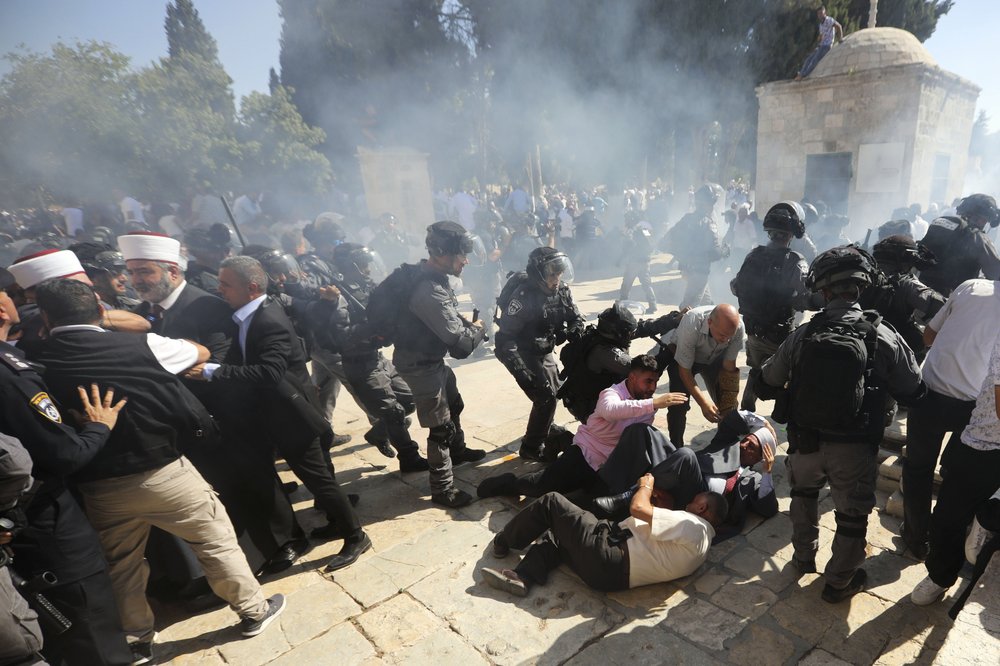 JERUSALEM (AP) — It wasn’t inevitable that the overlap of Jewish and Muslim holidays would lead to clashes at a Jerusalem site deeply revered by both faiths.

But when rumors circulated that Israeli police would allow Jews to visit the hilltop compound during Muslim prayers, it appeared to many Palestinians that Israel was further chipping away at their claims to the site.

As demonstrators massed at the gates and began throwing stones at the police, it became a self-fulfilling prophecy. After an outcry by right-wing Israeli leaders, the police reversed an earlier decision to bar the Jewish visitors and let them in, as stun grenades echoed and tear gas filled the air.

The holy site, known to Jews as the Temple Mount and to Muslims as the Noble Sanctuary, has long been a flashpoint for Israeli-Palestinian violence. But sensitivities are especially high at the moment, with the peace process a distant memory and Israel heading to elections next month.

In the current atmosphere, even the smallest perceived changes to the status of the site — the emotional and symbolic center of the decades-old conflict — can spark violence.

The compound is the holiest site to the Jewish people and the third holiest in Islam, after Mecca and Medina. It was the site of two Jewish temples in antiquity and is the home of the iconic gold Dome of the Rock and the al-Aqsa Mosque.

On Sunday morning, tens of thousands of Muslims flocked to the site to mark the start of Eid al-Adha, a Muslim holiday honoring the time God stayed Abraham’s hand after asking him to sacrifice his son. Hundreds of Israeli religious nationalists also showed up in observance of Ninth of Av, when Jews mourn the destruction of the temples and other historical calamities.

The site is located in east Jerusalem, which Israel seized along with the West Bank and Gaza in the 1967 Mideast war. The Palestinians want those territories to form their future state, with east Jerusalem as their capital. Israel annexed east Jerusalem in a move not recognized internationally, and views the whole city as its capital.

The hilltop shrine is managed by an Islamic trust under Jordanian stewardship, and day-to-day affairs are governed by informal understandings with Israel known as the “status quo.” The Palestinians fear any erosion of the status quo could lead to an Israeli takeover or partition of the site.

According to those rules, Jews are allowed to visit the compound during certain times but are forbidden to pray there. The Islamic trust overseeing the site, known as the Waqf, said it was unprecedented and unacceptable to allow Jews to visit during a major Muslim holiday.

“It has been customary that on Muslim holidays, the site would be closed to non-Muslims in respect for the special sanctity of the days,” said Daniel Seidemann, founder of Terrestrial Jerusalem, a group that tracks developments in the holy city.

“That basically was violated for the first time when Jerusalem Day and the final days of Ramadan overlapped (in June), and it happened again yesterday,” he said.

In response, the Waqf said it took the “exceptional decision” to delay morning prayers, typically held at 6:30 a.m., by an hour so that they would conflict with normal visiting hours. Soon thereafter the clashes erupted, wounding at least 14 Palestinians and four Israeli police.

For decades, most rabbis forbade Jews from visiting the site altogether, but a growing cadre of religious nationalist rabbis have endorsed visiting the holy site and their adherents have flocked there in increasing numbers in recent years.

The number of Jewish visitors to the shrine stood at around 5,800 in 2010, but by 2018 had grown to 35,600, according to statistics released by Public Security Minister Gilad Erdan.

He said 1,729 Jews visited the site on Sunday, compared to 1,440 on the Ninth of Av in 2018, adding that he would “continue to work to strengthen Israeli sovereignty on the Mount.”

Jerusalem District police chief Doron Yedid said it was the Waqf that violated the status quo by delaying the prayers. Police said the site would remain closed to non-Muslim visitors until Thursday, following the end of the Muslim holiday.

“The message sent to the Palestinians and to the Muslim worshippers is: ‘This is a shared site. Get used to it,’” Seidemann said. “And that is a significant erosion of the traditional understandings of the status quo.”

Azzam Khateeb, the Waqf’s director, said Sunday’s altercation proved that “Israeli ambitions in the mosque are not limited to the extreme right-wing groups, but also to the Israeli government.”

Israeli Prime Minister Benjamin Netanyahu has repeatedly said he has no intention of changing the status quo, despite calls from his right-wing allies for expanded access.

That has left him vulnerable on the issue as he seeks to secure an unprecedented fourth consecutive term in office in elections next month, which were called after he failed to form a coalition government following a vote in April.

“It’s very difficult for Netanyahu right now,” as he competes for votes with other right-wing parties, said Lior Lehrs, director of the Program on Israeli-Palestinian Peacemaking at Mitvim, an Israeli think-tank.

That may encourage Netanyahu to adopt a tougher stance, especially after he was widely criticized by right-wing leaders in the wake of Sunday’s clashes.

In the meantime, Israeli hard-liners are hailing Sunday’s visit as a victory.

Assaf Fried, a spokesman for a group calling for the construction of a third temple on the site, expressed pride in the visit in a Facebook post.

“You need to remember,” he wrote, “that since the Muslim conquest of Jerusalem (in 637 A.D.), not a single Jewish foot stood on the Temple Mount on a Muslim holiday.”