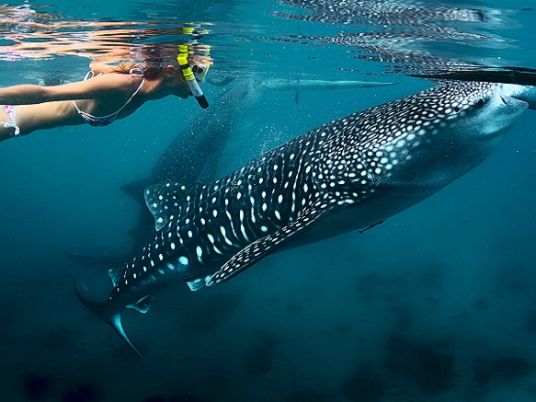 Done the famous Big Five of Africa — lion, elephant, buffalo, leopard and rhinoceros?
What's next?
Time to swap the khaki shorts and binoculars for diving suit and swimming goggles in pursuit of five other giants in Asia-Pacific.
Found in the oceans of Australia and islands further afield are some of world's most iconic endangered marine species: the white shark, green turtle, the humpback whale, whale shark and the Australian sea lion.
As I discovered, swimming alongside them can be a life-altering experience, albeit one fraught with difficulties.
But it's worth the effort.
Here's how to do it — and what happened when I tried.
Australian sea lion 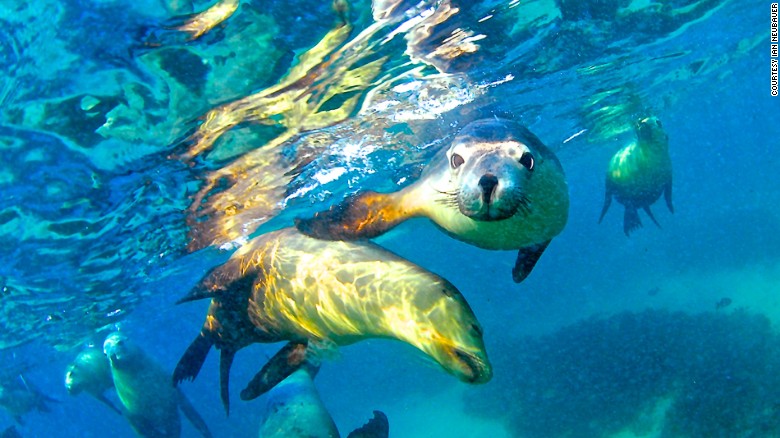 The largest remaining colonies of Australian sea lions are found on the islands of South Australia. Among them, Hopkins Island is the the most accessible destination to see the adorable mammal.
Australia sea lions were once found in great numbers along the continent's south coast.
But they were hunted to the point of extinction in the early 1800s.
Today, the species is still listed as "vulnerable" under Australian law.
The largest remaining colonies of Australian sea lions are found on the islands of South Australia.
The most accessible colony lives on Hopkins Island, a rocky outcrop in the Spencer Gulf some 30 km from the tuna fishing town of Port Lincoln, where charter companies run popular sea lion tours.
Swimming with Australian sea lions is like being on the set of an aquatic Cirque du Soleil.
Using their flippers to dart through the water with tremendous ease, they take turns doing backflips, somersaults, leaps, swirls and twists out of the water.
Awe-inspiring moment: Life-affirming doesn't even begin to describe how I feel when a female swims up to me and rubs her whiskers in my face.
It's not for nothing these adorable creatures are known as the Labradors of the sea.
Risk factor: White sharks prey on sea lions. Tour operators say sharks don't hunt around Hopkins Island, but there's no guarantee.
Swimming skills: Participants must be able to swim 100 meters from a charter boat to the island and back.
Calypso Star Charters in Port Lincoln offer half-day tours to Hopkins Island for AUD190 ($135).
Green sea turtle 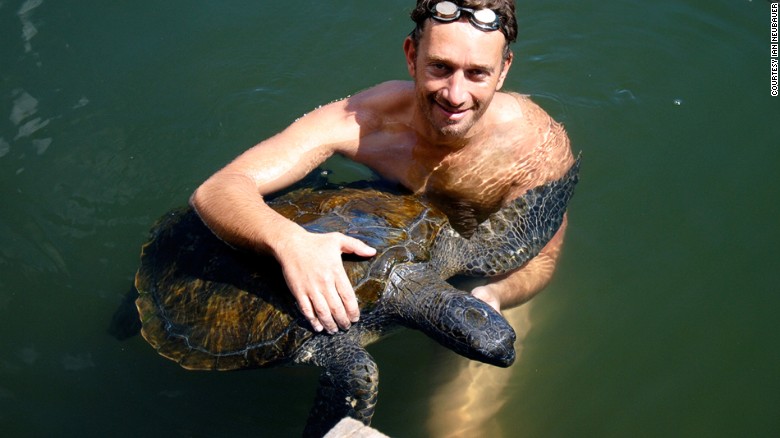 Keep your head above the water and you'll be fine.
In the tiny Pacific nation of Samoa, green turtles, or I'a sa (sacred fish), are an important part of tradition, folklore and song.
Listed as endangered by the International Union for the Conservation of Nature, the species is also hunted by subsistence fishermen for its meat, which is considered a delicacy in South Pacific cultures.
At the Saleaula Turtle Reserve in the northeast corner of Savai'i — Samoa's largest island — a family is trying to change islanders' relationship with green turtles.
"We breed them and when they are big enough, we tag and release them into the ocean," says Papalii Faafetai, owner of the reserve. "Any fisherman who catches a turtle in their nets, we pay them to bring them here instead of eating them."
Awe-inspiring moment: Floating in the water with green turtles is a surreal experience, like visiting a zero-gravity world inhabited by fluidic, amiable aliens.
At first I jumped with fright whenever one brushed against my back, but soon became accustomed to their slimy, inquisitive touch.
The Saleaula Turtle Reserve is also one of only a few places in the world where visitors can swim with green turtles in captivity.
Risk factor: The holding pond has a high concentration of algae created by the waste product of 20-something turtles. It's advised to keep your head above the water.
Swimming skills: Basic. The holding pond is waist-deep.
The Saleaula Turtle Reserve on Savai'i Island, Samoa, charges 5 Tala (US$2) entry.
White shark 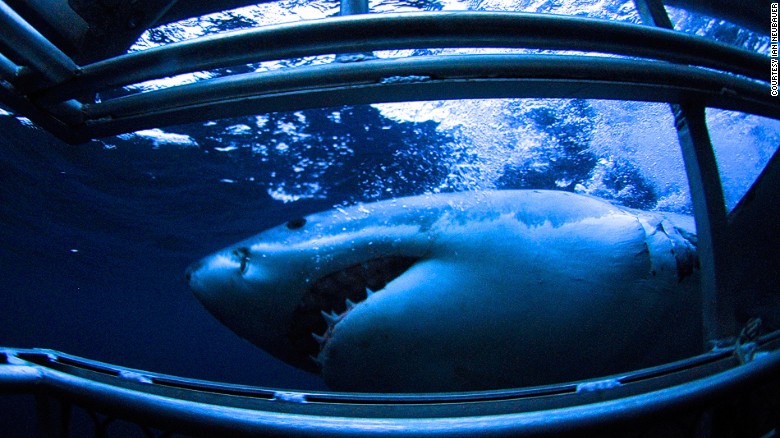 Time to face the "Jaws" fear.
There's no creature on earth that engenders greater fear among humans than the white shark, even though it's the white shark that should be scared of us.
Classified by The International Union for Conservation of Nature as vulnerable to extinction, the big fish's populations have been severely impacted by commercial gillnet fisheries, shark-fin poachers and pollution.
But in the Neptune Islands, a series of uninhabited islets 30 kilometers southeast of Cape Catastrophe in South Australia, white sharks are in abundance.
It's also where Rodney Fox, survivor of the world's worst documented shark attack (Fox was nearly bitten in half in 1963) runs his famous cage-diving expeditions.
Departing from Port Lincoln on a refurbished tuna boat, Fox bring passengers face-to-face with nature's ultimate killing machine from the safety of a steel cage fitted with breathing apparatuses.
Awe-inspiring moment: The largest great whites are six meters long but it's their girth — as wide as a van — that took my breath away.
Seeing these torpedo-shaped monsters glide effortlessly through the water in their natural habitat is a remarkable and humbling experience.
Seeing them explode with the force of a cannon when they make a pass at the bait was the most thrilling wildlife experience of my lifetime.
Risk factor: In the UK and South Africa, divers have narrowly escaped after their cages were savagely attacked by sharks. No such incidents have occurred in Australia.
Swimming skills: Basic. However a PADI or equivalent diving certificate is needed to join ocean floor cage dives.
Rodney Fox Shark Expeditions offer two- to five-night voyages to the Neptune Islands starting from AUD1,195 (US$850).
Humpback whale 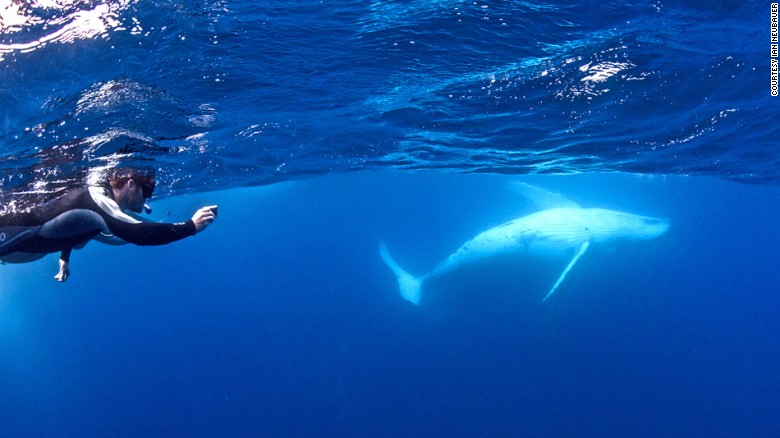 It's almost certain you'll see a humpback whale, but whether it will want to swim with you depends on luck.
Heavily exploited in early 1900s, the humpback is the beneficiary of one of the most successful wildlife recovery programs in history.
The International Whaling Commission says the species has returned to their unexploited size in the waters off Australia's east coast, where more than 20,000 humpbacks migrate during the Antarctic winter to feed, breed and calve.
Whale watching vessels are a dime a dozen along the 5,000-kilometer-long coast.
But in the sleepy surf town of Mooloolaba on Queensland's Sunshine Coast, a company called Sunreef has taken it to the next with offering whale swimming experiences.
Sunreef's dive boat motors into open ocean where owner Dan Hart scans the horizon for bursts of vaporized water shot from the whales' blowholes when they surface to breathe.
Once a humpback is spotted, the skipper cruises up to a 100-meter distance and throws out a line.
The swimmers jump in and hold on the line.
It's then up to the whales to come over and say hello.
Does it work?
Hart says all of his tours see whales but only about half get to swim with whales. I embarked on three trips with Sunreef before I got to swim with a humpback for two seconds before it dived and disappeared.
But others have been more successful (see photos in the gallery).
Risk factor: Unknown. The industry is in its infancy and seen no injuries to date. But a fin or tail swipe from an adult whale can kill just about anything. White sharks also follow whales.
Swimming abilities: Advanced. Participants must be confident swimming in open seas.
Sunreef in Mooloolaba offer half-day whale swim tours for AUD128 (US$91).
Whale shark 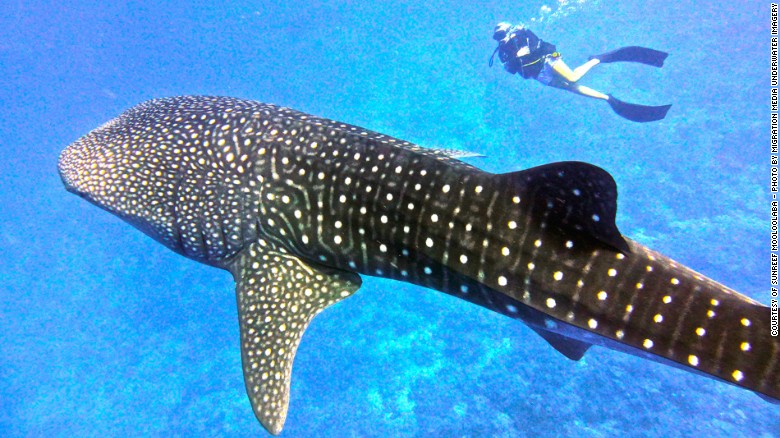 Despite being the largest fish on the planet, the Whale Shark is a gentle swimming companion. South Ari Atoll, a ring of 120 sunny islets in the Maldives, is a regular hangout for these sea giants.
Weighing up to 20 tons, the whale sharks is the largest fish on the planet.
It's also harmless, a gentle giant with brush-like filters in place of teeth it uses to ingest plankton, beautiful yellow spots and stripes unique to each individual.
Whale sharks are globally protected under the Convention of International Trade in Endangered Species.
But illegal poaching in east Asia has seen their numbers fall to the mere thousands.
On the flip side, whale shark eco-tourism has generated significant income in places like South Ari Atoll, a ring of 120 sun-kissed islets in the Maldives.
It has become famous because of the large presence of whales sharks.
In 1997, it was declared a protected marine park specifically because of the species.
Awe-inspiring moment: "The first time I swam with whales sharks we were on a speedboat doing a manta ray excursion," says Chiara Mascetti, an Italian marine biologist at Lux* Island Resort.
"We were on the way back to the resort when suddenly I saw a fin rise about the surface. I thought it was a whale but when I jumped into the water I realized it was a whale shark. It was feeding on plankton and had its mouth wide open.
"It remained near the surface, barely moving for 15 minutes until it swam off.
"It was an amazing experience because it was so unexpected."
Risk factor: Next to zero.
Swimming abilities: Basic. The waters of South Ari Atoll are protected and calm.
Lux* Island Resort in the Maldives offers bi-weekly whale shark excursions for US$100 per person.