Egypt is a massive living organism — a web of ticking clocks, each set to a slightly different millisecond. With about 80 million in the country, 18 million of whom are woven into the streets and buildings of Cairo, the traffic of the city may crawl but many would say it is only by the will of God that it continues to flow at all. People are everywhere —driving, jumping off buses, walking, bicycling … ticking minute by minute through the days and nights of the city. Doctors, valets, belly dancers and beggars … Cairo keeps 18 million cogs in one of the world’s busiest wheels. This series takes a magnifying glass to one person, a representative of a job that keeps the city ticking. It is an eye-level shot that takes you through a day in the life of a cog in the wheel of Cairo. —Nevine El Shabrawy

Over the years, sayises, or street parking assistants, have slowly become a fundamental part of Cairo’s urban landscape. As cars and traffic continue to pile up by the day, sayises have long declared themselves majorly responsible for making sure that the city’s streets, which now often resemble an oversized car park, flow.

However, despite their important role in managing the city’s congestion, most people have only ephemeral relationships with the city’s sayises, usually revolving around the 15 seconds a person spends getting in and out of their car.

Ahmed Ramadan, 30, is currently a full-time sayis who spends his working days in ultra-congested Mohandiseen on a street with a large private school.

I met Ahmed at 7:10 in the morning outside an adjacent building where he sleeps, 10 minutes after I began hearing his Nokia ringtone alarm clock start to wake him up. He smiles at me and says hello as he continues to shout expressions concerning breakfast back at two of his colleagues, also sayises, who share his sleeping domain. One of them is his brother, Mohamed.

The other two aren’t as happy to see me and give off the vibe that I am interfering with their working day, particularly because no arrangement for Ahmed to be paid has been made. However, he had agreed that I could spend the day with him for the sake of the article. “Yalla ya Ahmed, yalla, butal kalam [Quickly, Ahmed, enough talking]!” Mohamed says as they shuffle out onto the street. I quickly shuffle behind them to a breakfast stand a few hundred meters down the road that was serving bread, salad, foul and taameya.

“LE5 gets the three of us a big breakfast — we take turns paying,” says Ahmed. “Breakfast is holy; without this meal we can’t survive the day.” The next meal time will be after 4 o’clock, well after school is out.

School starts at 8 am. Ahmed said the location ensures a decent amount of twice-daily tips at least five days a week. It is now 7:20. As we walk back to the school, Ahmed, while munching on his breakfast, apologizes to me in advance that the next hour or so is going to be pretty hectic. I lean on a car opposite the school and watch.

For the best part of the next hour, I see Ahmed and his colleagues perform something akin to a rigorous decathlon as a whole variety of citizens arrive at the street, many of whom go into the school, in an assortment of vehicles, including school buses.

Some exit the car, mumbling at Ahmed while storming off into various buildings. Others greet him kindly with a tip and continue with their business.

Unfortunately there was no visible correlation between the type of car being driven and the attitude towards the sayis. But it seemed that the majority of the people were regulars: staff from the school, workers from adjacent office buildings and residents from nearby buildings leaving for work. The street has various banks and restaurants on it, too.

The manner in which the cars were handled by the sayis was as if they were on autopilot. Run to the corner, grab a car, park it, put the key in the pocket, run back, repeat. All to the soundtrack of continuous honking from cars struggling to pass, and shouting from the respective drivers.

Things started to slow down around 8 am, when Ahmed and company began to organize the keys from their pockets in a basket and quarrel about the tips, or lack of tips, earned while also attending to the latecomers. In an hour, the location transformed from a quiet Mohandiseen street into a car park.

At around 8:30, I approached Ahmed as he lit a cigarette and invited me to sit down, and we began to talk.

Ahmed is from Monufiya, where his mother and two sisters live. He goes there every other weekend. He came to Cairo two years ago to make money. He started working as a sayis with his brother on the street, and the two were soon allowed to sleep in the adjacent building, permitting they also perform bawab, or doorman, duties for the building.

Ahmed sees his job as a service that the street needs and stresses that it’s a huge responsibility.

“Many people act like they don’t care about our existence, but when something happens to their car, it’s us they look for and want to punish,” he says. “I can’t afford even the door of one of these cars, so I have to guard them with my life.”

At about 9, a latecomer pulls up on the street, yelling for Ahmed, to which he quickly responds and runs over. She gives him her keys while running off, mumbling, “Merci!”

“Merci, merci, merci!” he says, in a comic but disillusioned voice while walking back toward me.

“I’d be a millionaire if I could cash those in,” he laughed.

He tells me that for the rest of the day, until about 3:30 — school finishes at 2:30 — his job is to guard the cars and the keys, and to avoid getting hungry with cigarettes, and tea if he’s lucky.

Tea is a treat. There is no allocation of who buys or drinks tea. If someone wants tea enough, they buy, and they buy a pot to be shared by everyone. On this day, I purchased two pots of tea for Ahmed and company.

“We deal with all types and classes of people throughout the day,” he says. “Many from the upper classes, too. But I can’t afford to think about that because it depresses me too much and then I am unable to work.”

Throughout the day, Ahmed would rapidly fluctuate between his serious self, when talking to me about his personal life, and a nonchalant, easy-come, easy-go sayiss, when attending to the drivers.

Ahmed then describes a deeper awareness and sadness concerning his job.

While he believes that his job is crucial for the city to run smoothly, and acknowledges that the more crowded the streets are, the higher his profit, he hates that he feels forced into being the face of a terrible urban system that suffocates Egyptians.

He explains how prior to 25 January, a whole business was built on this system.

“The government encouraged higher buildings, more cars and less space,” he says. “Then, after we perform our work, the police used to come and take a percentage from us for parking on government property, and then that money would be given to their boss to buy more buildings and take more space.”

But while criticizing the old — and largely remaining — governmental system, he fears what the revolution has brought.

“I was proud to hear the chants of the youth, but I was afraid of what could come,” he says. “The youth say they wanted freedom, but freedom for them means freedom for everyone, and there are bad people out there.”

Ahmed never attended a protest or went to Tahrir square. He believes the youth got ahead of themselves, and that freedom has and will allow Egypt’s worst characteristics, which were marginalized, to finally surface.

“The old system was corrupt, but if you knew how it worked, you found your place and everything ran fine,” he said. “Now nobody trusts each other, and nobody has jobs, and making money is impossible.”

Ahmed is currently not married because he says he cannot afford it, and that is likely to continue given the circumstances. At one point, his brother mildly interrupts again, curious if there’s any money involved in this.

Most of the day is spent shuffling around, parking or retrieving odd cars, squeezing them in further, arranging keys, organizing tips, or smoking cigarettes. The building they live in is also attended to at various points, and an errand to a nearby market to get groceries is made. Ahmed also gets groceries for his own lunch later on.

Dealing with angry drivers is seemingly the highlight of the day, or attending to various street commotion, such as an odd bomba (cherry bomb) going off. 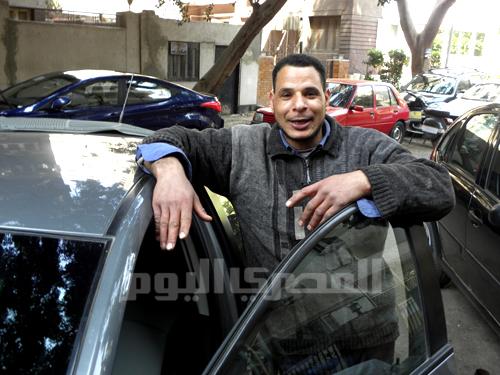 At around 2 pm, the hectic valet shuffle starts up again, and Ahmed and company are once again racing around fetching keys and cars amid a flood of school kids, parents and school buses. Meanwhile, I cross the street to get something to eat and return.

At about 4, things are calming down again. Ahmed and I go inside his building, where he prepares lunch. Macaroni and eggs.

“We usually eat macaroni and eggs for lunch,” he says. “Occasionally fish or chicken if we can. I also usually try to go to bed at around 9 or 10 and skip dinner, which also costs money.”

They all gather to eat at around 5, and I leave for a while. When I come back around 6, the odd resident arrives home from work, whose car they also park.

Ahmed has made about LE18 today by parking cars. It looked as if he had managed about 40 cars throughout the day.

He said he makes about LE350 per month parking cars, and that his bawab services bring him LE500 a month, plus housing.

I ask Ahmed who he voted for in the parliamentary elections. He says he didn’t get a chance to vote because of “circumstances,” but that he would have voted for the Freedom and Justice Party because he believes they take care of people on the street.

In the upcoming presidential elections, Ahmed says he will vote for Ahmed Shafiq, who he says he trusts. He likes his policies and believes he will be able to bring the country to stability once again.