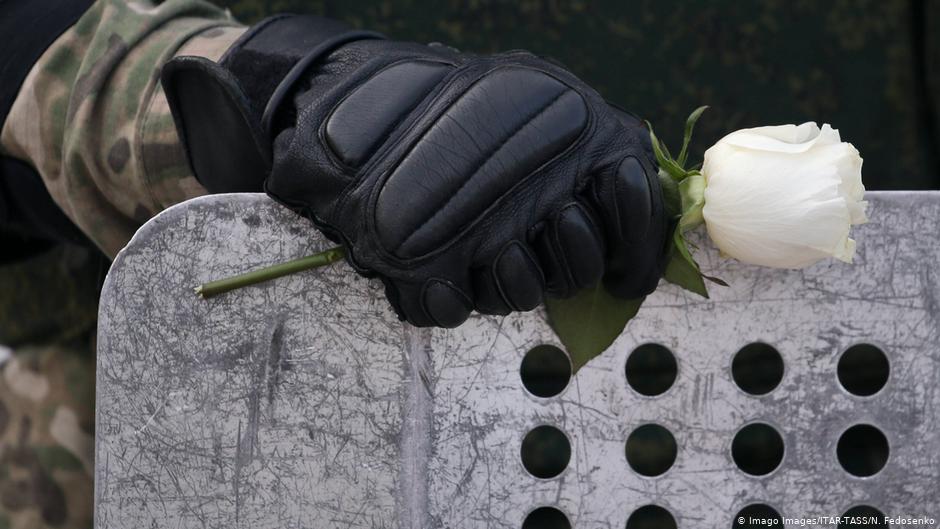 On August 18, Belarusian President Alexander Lukashenko signed a decree awarding medals to more than 300 security officials for “impeccable service.” According to the Interior Ministry, the order had nothing to do with the suppression of protests following the August 9 presidential election; officials claim that the medals were proposed to the Council of Ministers back in March.

Now, more and more police are quitting the force because of the state violence at those protests and posting their letters of resignation alongside their official identity cards online. They are also posting public video messages to their former colleagues, in spite of the consequences that they might face. DW spoke with some of them.

Yegor Yemelyanov, a police captain from Novopolotsk, about 240 kilometers (145 miles) north of Minsk, resigned after 17 years on the force. He said he’d wanted to quit before the election but he received orders to see his contract through to the end. If he did not, he was told, he would have to refund the roughly $2,500 (€2,100) payment that security officials receive in Belarus if they sign long-term contracts.

“I have a family and loans to pay off, including for my apartment, so it was a hard decision,” Yemelyanov said. “But, after what happened on August 9 and 10, I had no more doubts. It was clear to me that I couldn’t stay on the force. This is a real war against unarmed people.”

Yemelyanov said he would never force people to disperse, let alone hit them, even if he were ordered to do so — whatever the consequences. “I was warned that I would be fired in disgrace,” he said. “So I handed in my ID and said I wouldn’t be coming in anymore.” Yemelyanov said he had never been involved in breaking up peaceful protests and that the police in Novopolotsk had not joined their counterparts across Belarus in using violence or weapons when making arrests. He said such action had been taken only by security forces from elsewhere who had been deployed in the city.

Five of Yemelyanov’s colleagues resigned after he did. “I heard that my superiors are saying I was bought by ‘Europe’ and that it was all just a PR stunt by me to make money,” he said. “I am scared both for myself and my family. If the present government stays in power, I could have problems.”

‘We are one people’

Alexander, a lieutenant colonel who gave only his first name, was also sure about his decision: “When I saw pictures of people who had been beaten up by security agents, I knew for certain that I could not serve this system of power anymore.” He had trained Interior Ministry employees. On August 9, he was guarding a polling station in Minsk. He said people had gone to vote as if it were a party. But, he said, their ballots were probably not counted. “I can’t say that I saw any manipulation,” he said, “but people sitting on the commission were scared to go out, didn’t want to say anything and just cried.”

After the election and the violent suppression of protests, Alexander finally resigned. “I saw what state people were in when they left the detention facilities on Okrestin Street in Minsk,” he said. “We never taught our students anything like that. That’s not why we entered the force.” Alexander acknowledged that he had been deployed to break up protests after the 2010 presidential election, but said he had not participated in arrests or beatings. He said he couldn’t understand the current brutality.

Alexander said some people accused him of being paid to resign as part of a PR campaign, but others supported him. “We are one people,” he said. “We shouldn’t fight each other — let alone hit each other.”

‘Every officer swears to serve the nation’

“Employees at the investigating authority don’t go out and chase people off,” Vladimir, an officer who asked that his real name not be used, told DW. “But every officer swears to serve the nation.” Until recently, Vladimir had worked for the investigating authority in a city where demonstrations were dispersed by force. “There is a video in which a kneeling man is arrested and beaten with a baton,” Vladimir said. “I spoke with a police officer who was involved. I was amazed by how he spoke about it.”

Vladimir said he had proposed to his colleagues and the heads of the investigating authority that they hold an event to talk about the actions of the security forces during the otherwise-peaceful protests. “In all likelihood, a number of offenses were committed that the investigating authority would once upon a time have immediately looked into,” Vladimir said. “Now, the reaction is a delayed one. That has to do with politics and not with the law.”

The proposal was rejected. Vladimir then wrote a report in which he requested inquiries into both the actions of the security authorities and the evidence of election manipulation. “We don’t know whether penal proceedings will be launched against security officials,” he said. “I do not rule out there having been some provocations by protesters — there is a video — but the actions by the authorities must be assessed in accordance with the law.” He added that this is his personal view and not the formal stance of the investigating authority. “I don’t think that any of my colleagues were ready to join me at that stage,” he said. “I don’t know how things stand now. But they are deterred by factors like their contracts and having to go into early retirement.”

Relieved of his responsibilities, Vladimir has become the subject of an internal investigation. If the situation in Belarus does not change, he said he would likely be fired after 17 years on the force for “discrediting” the investigating authority. “I am, of course, scared for myself and my family,” he said. He added that, should the government survive the current crisis, reprisals would likely be in store for him and other officials.