On the morning of April 12, couple Alastair Shipman and Hannah Simpson awoke in a shark tank in Paris, bringing their relationship full circle to where it first began.
Of the more than 60,000 submissions sent to Airbnb’s Shark Aquarium contest in Paris, it was Shipman’s love story and appeal to reunite with the long distance girlfriend he first met at an aquarium four years ago, that won the hearts of the judges.
On April 11, the couple from England and Northern Ireland arrived at the Paris Aquarium near Trocadero to christen the specially-conceived underwater chamber as the first of three couples chosen to spend the night surrounded by 37 sharks.

The other couples came from the US and China, and spent their night with the sharks on April 12 and 13.
After being led through corridors normally reserved for aquarium staff and descending into their underwater bedroom outfitted with a circular bed, a copy of Jules Verne’s Twenty Thousand Leagues Under The Sea, shark magazines and toy sharks, the pair broke out into giddy grins, which Shipman later admitted was part excitement, part fear. 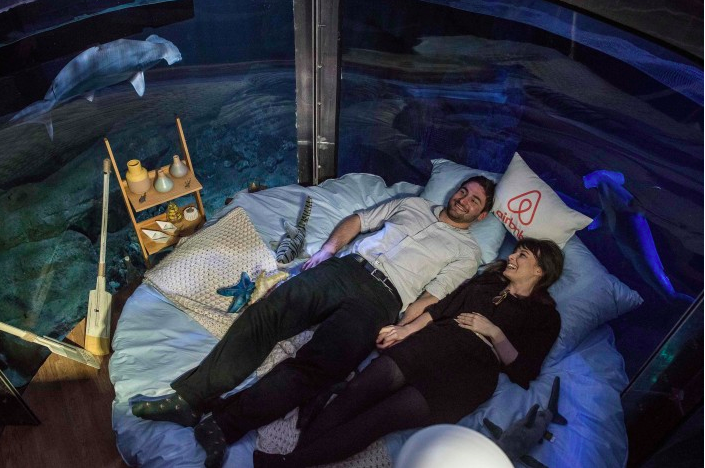 “I was terrified,” he said laughing.
“It was amazing,” added Simpson.
“There’s no way we’re going to go to sleep.”
The project to build and submerge an underground hotel room at the Paris aquarium was a year in the making, says Airbnb spokesperson Anne-Sophie Frenove, and doesn’t end with the special sleepover.
Following its run as a hotel room, the chamber will be converted into an underwater observatory for biologists and scientists at the aquarium, who will be able to take advantage of the 360-degree views to observe the sharks’ behaviour during the day and overnight.
In order to construct the custom-made chamber, engineers, scientists, architects and biologists were recruited. At first, architects said the project was impossible for the prosaic reason that the unit couldn’t fit through the doorways.
A makeshift catamaran support system had to be built to serve as a construction site for the chamber. The unit had to be disassembled then reassembled inside the aquarium, with a margin of 2mm between the panels and the door.
But these are details that Shipman and Simpson are blissfully unaware of. When Shipman learned about the Airbnb contest which launched last month, it was only natural for the 25-year-old to take a chance and enter.
Since their first encounter at the London aquarium during a school trip years ago, the long distance couple – she currently lives in Boston, he lives in London – make it a point to visit an aquarium whenever they’re reunited, often at destinations that meet each partner halfway.
It’s become a tradition for the couple for sentimental reasons, but also because they share a mutual love for underwater zoos.
“It’s a nerdy passion,” says Simpson, laughing.
Following a tour of the aquarium, the couple was treated to a classic French dinner that started with lobster in champagne sauce, grilled filet of steak with truffle sauce and ended with a chocolate surprise and macarons, served tableside by their personal chef.