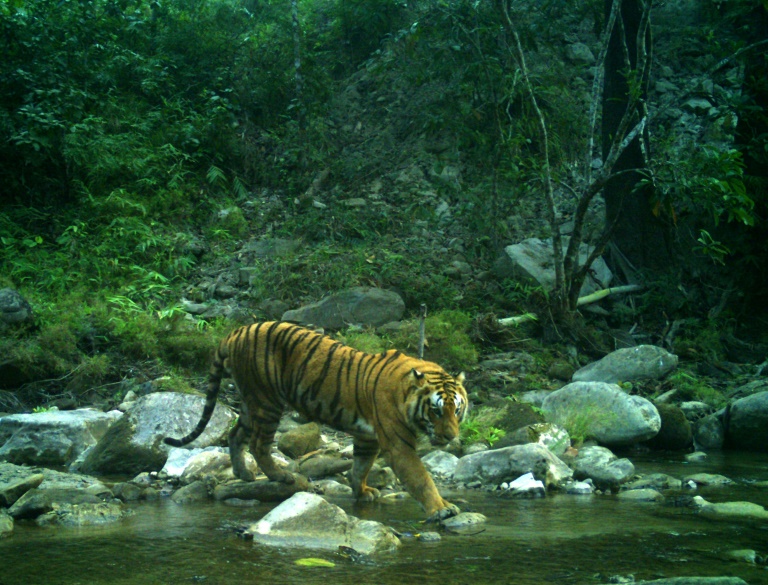 Chayan Kumar Chaudhary flicked through photographs captured on a hidden camera in the jungle, hoping his favorite big cat — dubbed “selfie tiger” for its love of the limelight — had made another appearance.

Thousands of camera traps have helped conservationists track Nepal’s wild tiger population, which has nearly doubled in recent years as the big cats claw their way back from the verge of extinction.

After a nine-year push to protect tigers, an exhaustive census across 2,700 kilometers (1,700 miles) of Nepal’s lowlands completed earlier this year revealed the population has grown from 121 in 2009 to an estimated 235 adult cats today.

On the frontline of the painstaking survey were trained locals like Chaudhary in western Nepal’s Bardia National Park where tiger numbers have grown nearly fivefold.

The 25-year-old helped track and record wild tiger movements through the park by scanning images taken by cameras hidden in the jungle’s undergrowth.

“It was very exciting when we checked the (memory) cards and found photos of tigers,” Chaudhary told AFP.

“It felt like we are part of something big.”

Nepal’s southern lowlands, home to five national parks, were mapped into grids, each fitted with a pair of camera traps to record any tiger activity.

More than 3,200 of these special camera traps were installed, some by field workers on elephants to navigate the dense jungle.

“It was not an easy process and risky as well,” said Man Bahadur Khadka, head of Nepal’s department of wildlife and national parks.

These cameras were equipped with sensors that triggered a click whenever any movement or a change in temperature was detected.

Soon the photos started to trickle in: lone tigers walking past, mothers with their playful cubs and the occasional tiger feasting on a fresh kill. And Chaudhary’s favorite: a big cat that seemed to enjoy preening in front of the lens.

The census began in November 2017 and by the following March, more than 4,000 images of tigers had been collected.

“We then began analyzing the photos,” Khadka said. “Just like our fingerprints, tigers have unique stripes. No two tigers are alike.”

Conservationists say that behind Nepal’s success was a strategy to turn tiger-fearing villagers — who could earn thousands of dollars for poaching a big cat — into the animal’s protectors.

A century ago, Nepal’s lush jungles were a playground for the country’s rulers and visiting British dignitaries who came to hunt the Royal Bengal tiger.

In 2009, the government changed tack, enlisting community groups to protect the animals. Hundreds of young volunteers were recruited to guard Nepal’s national parks, patrolling against poachers, raising awareness and protecting the natural habitat.

“Tigers are our wealth, we have to protect them,” said Sanju Pariyar, 22, who was just a teen when she joined an anti-poaching group.

“People understand that if our tiger and rhino numbers grow, tourists will come and bring opportunities. It is good for us.”

Armed with a stick, Pariyar regularly goes out on patrol to search for traps laid by poachers.

The locals have also become informants, alerting park officials if they see anything, or anyone, suspicious.

Nepal has tough punishments for poachers — up to 15 years in jail and a heavy fine — and it has recently started a genetic database of its tigers to aid investigations.

The contraband was believed to have been destined for China, a top market for wildlife smugglers, where rare animal parts are used in traditional medicine.

In 2010, Nepal and 12 other countries with tiger populations signed an agreement to double their big cat numbers by 2022. The Himalayan nation is set to be the first to achieve this target.

“If a country like Nepal — small, least developed, with lots of challenges — can do it, the others can do it,” said Nepal’s WWF representative, Ghana Gurung.

But conservationists are aware that rising tiger numbers are also good news for poachers and the lucrative black market they supply with endangered animal parts.

Tiger poaching is difficult to track because unlike with rhinos, nothing of the cat is left behind after it is killed.

“It is now more important than ever to stay vigilant,” said national park warden Ashok Bhandari.