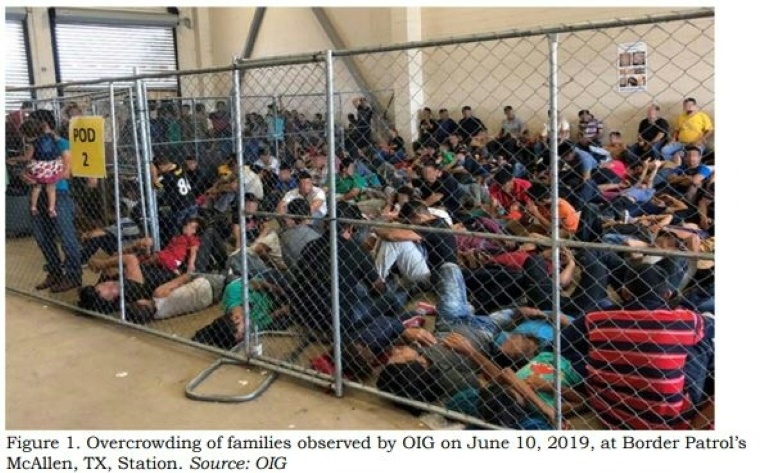 The inspector general for the US Department of Homeland Security warned on Tuesday about “dangerous overcrowding” in migrant detention facilities in Texas.

The report by the agency watchdog came a day after a group of Democratic lawmakers toured detention centers for undocumented immigrants in the state bordering Mexico and denounced “horrifying” conditions there.

The acting DHS inspector general said one senior manager at a detention facility described the situation as a “ticking time bomb” and raised security concerns for agency staff and detainees.

“Specifically, Border Patrol was holding about 8,000 detainees in custody at the time of our visit, with 3,400 held longer than the 72 hours generally permitted,” she said. “Of those 3,400 detainees, Border Patrol held 1,500 for more than 10 days.”

“Border Patrol’s custody data indicates that 826 (31 percent) of the 2,669 children at these facilities had been held longer than the 72 hours generally permitted,” she added.

Most single adults had not had a shower in a month and were being given wet-wipes. Some detainees were suffering from constipation after a diet consisting only of bologna sandwiches.

According to Border Patrol figures, 223,263 people were detained in the Rio Grande Valley sector between October 2018 and May 2019, up 124 percent from the same period a year earlier.

US Democratic presidential hopefuls denounced the conditions depicted by the report.

“No human being deserves to be treated like this,” Senator Kamala Harris wrote on Twitter. “This is abuse, it’s dehumanization, and it’s not who we are as a country.”

‘Nothing short of horrific’

“Sickening. Human beings are being herded like animals right now in our country,” Senator Elizabeth Warren tweeted, while Senator Bernie Sanders wrote that those in charge of the detention centers “do not respect basic human rights.”

Mayor Pete Butigieg tweeted that he was “outraged by these photos,” and Senator Corey Booker wrote that “this report is nothing short of horrific.”

The report comes as the White House and Customs and Border Protection (CBP) officials pushed back against criticism from the Democratic lawmakers who toured migrant detention facilities on Monday.

Representative Alexandria Ocasio-Cortez, who visited two such centers in Texas, described the conditions as “horrifying” and said migrants were being subjected to “systemic cruelty.”

“There’s abuse in these facilities,” the outspoken Democratic congresswoman from New York told reporters. “They put them in a room with no running water and these women were being told by CBP officers to drink out of the toilet.”

“Everybody who has control over that facility, or control for the Border Patrol, has said that’s not true, they’ve not heard of this,” Conway said.

CBP deputy commissioner Robert Perez, appearing on CNN, said the detention centers were “never designed to deal with the volume of migrants coming our way” and the Border Patrol is doing its best to deal with “absolutely over-saturated conditions.”

In addition to criticism over detention conditions, the Border Patrol is also under fire following the revelation of a secret Facebook group for current and former agents that is filled with racist memes and posts mocking migrants.

For example, a news story about a 16-year-old Guatemalan who died in Border Patrol custody elicited comments such as “Oh well” and “If he dies, he dies.”

The existence of the Facebook group called “I’m 10-15” was revealed by the nonprofit news site ProPublica. 10-15 is Border Patrol code for “aliens in custody.”

Border Patrol chief Carla Provost denounced the “inappropriate” posts in the Facebook group and the CBP, which oversees the Border Patrol, said it had launched an investigation.

Image: DHS/ Office of the Inspector General/AFP / – This image released in a report by the acting inspector general of the US Department of Homeland Security (DHS) shows migrant families at an overcrowded Border Patrol facility McAllen, Texas