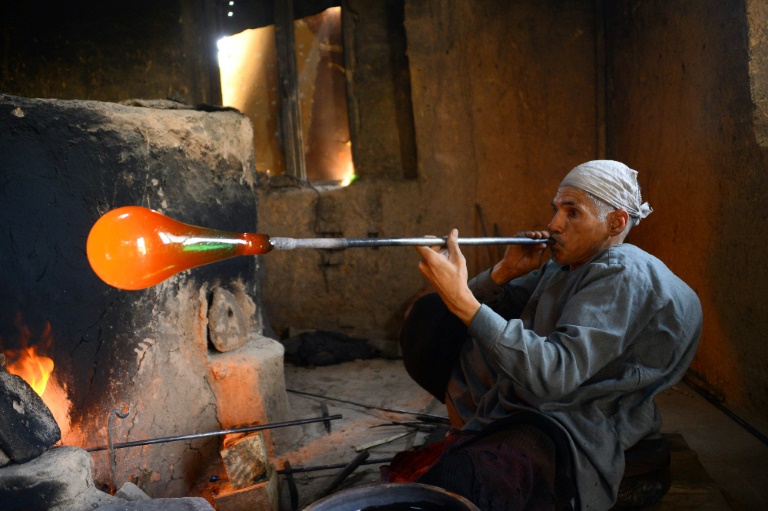 Hunched and shriveled, Afghan glassblower Ghulam Sakhi deftly blows and twirls molten glass into delicate blue and green goblets and vases — a craft passed down for generations but now at risk of dying out.

Sakhi is one of the last makers of Herati glassware in the eponymous western city where the once-thriving industry has been shattered by decades of war, poverty, and cheap imports.

The brick and corrugated iron workshop where Sakhi toils only operates a few days a month owing to the lack of demand for the distinctive colored glassware that is more expensive than Chinese-made products.

“People don’t value art,” says Sakhi, who is in his mid-40s but looks much older. He began working with his glassblower father when he was seven.

Sakhi sits on a low stool next to a wood-fired clay oven, occasionally wiping away sweat as the temperature inside the workshop soars above 40 degrees Celsius (104 degrees Fahrenheit).

His eldest son Habibullah works alongside him, scraping shards of glass — mixed with copper or iron powder to create a blue or green tint — into a bubbling pot of molten liquid inside the furnace.

Sakhi sticks an iron blowpipe into the fiery mixture, gently spinning it like a honey twirler. After extracting the rod, he swings, blows and rolls the molten glass into shape before firing it in a kiln.

The tools and techniques used by Sakhi have barely changed in generations, although instead of making glass from quartz, glassblowers now recycle bottles and broken windows, which are “easier to find”.

“It’s not going to last another generation,” says Sakhi, whose family have been making Herati glass for “200 or 300 years”.

Decades of war have driven away foreign tourists who used to be drawn to Herat, a city steeped in history as a trading hub on the ancient Silk Road and the 15th century capital of the Timurid empire.

“They think when they buy imports from China they are going to be better quality,” he explains.

The only hints of modernity in the smoky workshop are Sakhi’s blue Nokia mobile phone lying next to him and an electric fan whirring furiously in the searing heat.

Sultan Ahmad Hamidi, the white bearded owner of the workshop who spends his days lolling on a sofa in his store selling Herati glassware, trinkets and handicrafts, despairs for the future of his business.

His store, which is across a busy street from the city’s main mosque, is crammed with Herati glass goblets, vases and bowls that are gathering dust.

With prices starting around $6, it takes a month to sell 100 pieces, he complains.

As the craft declines, survival becomes a growing challenge for Sahki and his family.

Habibullah supplements their meager income from glassblowing by ferrying passengers around the city in a three-wheeled motorbike taxi.

But without government support or tourism, Sakhi fears he could be the last of Herat’s glassblowers.

“I’m very sad,” he says. “If it stays like this it’s already finished.”