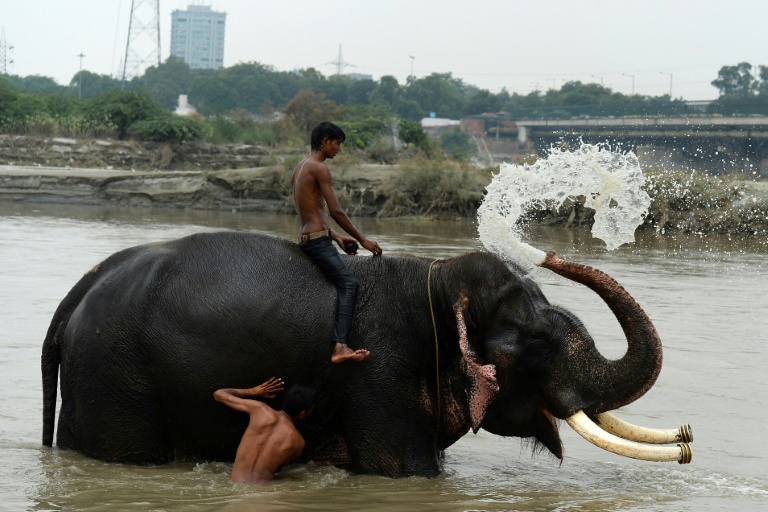 The mighty Heera marched through a crowded slum chewing bamboo, oblivious that freedom from life as one of Delhi’s last six elephants at work in the polluted city could be just around the corner.

After years of pressure from activists who accuse the animals’ owners of flouting wildlife regulations by keeping them in a city, authorities have ordered the seizure of the elephants.

They plan to move the 40-year-old tusker — along with Dharamvati, Laxmi, Gangaram, Moti and Chandni — out of the smoggy Indian capital, but warn it could take months to find a new home for them.

“They are kept away from their natural habitat,” a senior Forest Department official said, highlighting “reports of insufficient food, water, shelter and veterinary care, all which could expose them to disease”.

Fifty years ago the Indian capital housed more than 200 elephants, covered in garlands and carrying grooms to weddings, or being sought by the faithful for blessings at temples.

But now the city — overcome by cars, a population of 20 million and choking on pollution — is no longer a suitable home for the animals, with Heera and his five bedraggled companions the last elephants to live there.

Media reports say authorities are struggling to relocate the elephants because four are sick.

She has her own mud pool and quarters complete with fans and sprinklers, a world away from her poorer relatives who wade in the Yamuna, one of the world’s most polluted rivers.

‘In love with elephants’

But while animal rights campaigners welcome the move, it is a difficult moment for their owners — who deny any neglect.

Mehboob Ali likened it to snatching a legacy passed on by his ancestors.

“My family has been keeping elephants for six generations,” he said. “They are like our family and have been with us through thick and thin. We cannot live without each other.”

Heera’s keeper Mukesh Yadav has been looking after elephants since he was a child.

“I was so in love with elephants that I even decided not to marry. I felt that I must dedicate my life to the service of this holy animal,” he said.

The animals hold a special place in Indian culture, and elephant-headed Ganesha is one of Hinduism’s most revered gods.

Yadav bemoaned the loss of traditions that once allowed elephant keepers like him to work freely across the country.

“Earlier, people had a genuine fondness for these animals. A single village could have up to 20 elephants.

“We used to take a parade to graze in the fields and leave them to roam in the jungles. We would proudly present them at weddings and feasts. And now the government comes to us claiming that they are their property?” he said angrily.

Ali is infuriated by constant inspections of his elephants, which he believes are being done under pressure from activists.

He claimed that he has been harassed on several occasions by animal welfare groups.

“They are behaving as if we have stolen these elephants whereas they belong to us,” he said.

“Do you know that my great grandfather was often given elephants as gifts by the maharajahs? And we have continued to trade them at animal fairs in various parts of the country.”

But activists counter that such claims mask a murky nexus of commercial exploitation, where little interest is paid to the animals’ welfare.

Kartick Satyanarayan, co-founder of Wildlife SOS, said the elephants had spent most of their lives in deplorable conditions and must be taken back to the forests.

“If people are actually made aware of the brutal methods used to capture, tame and bring these elephants to the city, they would never want to see them here again,” he said.

“What would you choose, the joy of seeing an elephant rolling in the mud and walking the jungles, or seeing an abused and captive creature on the streets of Delhi outside a temple or a circus?”