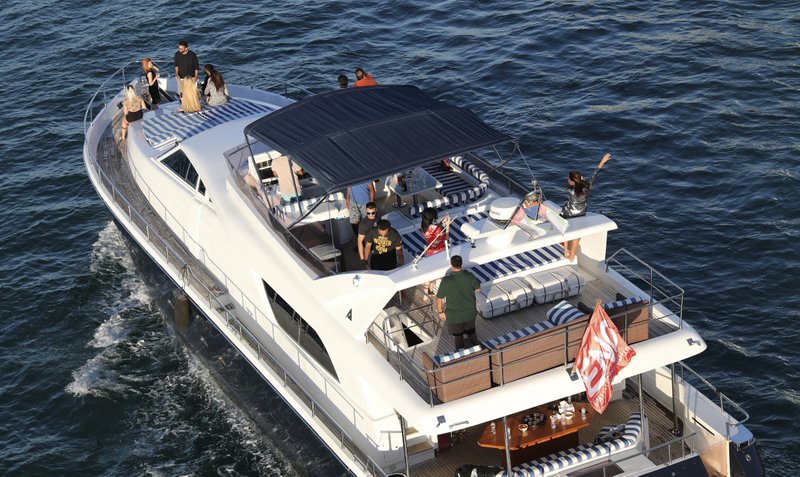 COPENHAGEN, Denmark (AP) — Denmark has temporarily suspended all flights from the United Arab Emirates for five days after suspicion arose that the coronavirus tests that can be obtained before leaving Dubai are not reliable, authorities announced Friday.

The development, which comes amid a surge of infections in the UAE, poses a direct challenge to the mass testing regime that had been the pillar of the country’s coronavirus response and economic reopening. Dubai was one of the world’s first destinations to open up to tourists, welcoming visitors from anywhere with only a coronavirus test.

Danish Transport Minister Benny Engelbrecht said the decision was made to allow the matter to be thoroughly investigated and ensure that the testing are being carried out properly.

“We can’t ignore such a suspicion,” Engelbrecht said, adding that the ban entered into force on Thursday night.

Danish authorities faced a “concrete and serious citizen inquiry into” how the tests are carried out at Dubai entry and exit points, he said, and “therefore we need to be absolutely sure that there are no problems.”

Engelbrecht said at least “one citizen” brought the South African variant of the virus “back from Dubai.” He did not identify further that person. Dubai has seen an increase in the number of South African residents as the country’s economy deteriorated in recent years.

Danish tabloid Ekstra Bladet said Friday there has been a second report of allegedly sloppy virus testing in Dubai, and cited Engelbrecht as saying “the information seem precise and valid.”

Since Jan. 9, Denmark has required that all passengers arriving in the Scandinavian country have a negative coronavirus test or proof that they have recently had COVID-19, the illness caused by the virus, to limit the spread of the virus.

In response to the move, UAE’s state-run WAM news agency carried a statement from a Foreign Ministry official stressing “that all accredited UAE testing centers are regularly subject to strict quality checks.”

Emirati authorities were currently communicating with their Danish counterparts to clarify the reasons behind suspicions surrounding the virus testing, the statement added, noting the government imposed tough penalties for violations of international testing standards.

On Jan. 8, Denmark’s Foreign Ministry advised against all travel abroad, including business travel. On Tuesday, Danish Prime Minister Mette Frederiksen told local media that “there is a reason why we really ask everyone not to travel. It’s really important that everyone listens.”

“There is a risk of bringing (virus) mutations to Denmark,” she said. “It can undermine our epidemic control and thus infect others and what is worse.”

Lea Hvidt Kessler, the wife of the former super-middleweight world champion, wrote on Instagram that no one in their family that traveled to Dubai before Christmas was infected. According to media in Denmark, there are currently 85 Danish nationals there and about 800 permanent Danish residents in Dubai.

On Friday, as the UAE shattered its 11th consecutive daily infection record with 3,552 new cases, Dubai’s state-run media office announced strict new limits on weddings, social events and private parties beginning next Wednesday, restricting all gatherings to 10 immediate family members. Wedding parties at hotels and other venues previously had been capped at 200.

The same day, Dubai ordered all gyms and restaurants to increase the physical space between trainees and diners. The city also put an immediate halt to all “entertainment activities” on boats and floating restaurants — a popular pastime in the city. Tourists and celebrities often flaunt their vacations on social media, posting photos of raucous, Champagne-soaked yacht parties that have splashed across tabloids in recent weeks. A day earlier, Dubai suspended all live bands and performances at nightclubs and bars in the city after hospitals were forced to pause non-urgent surgeries to deal with an influx of new COVID-19 patients.

Tourists have flocked to Dubai in recent weeks despite the raging pandemic, escaping lockdowns back home. The glimmering city-state, with an economy largely built on tourism, aviation and retail, has promoted itself as an ideal pandemic vacation spot. Aside from the ubiquitous masks and hand sanitizer dispensers, a sense of pre-pandemic normalcy prevails in the crowded bars, massive malls and luxury hotels.

Skyrocketing daily infections, which nearly tripled since November, failed to dent the normalcy even as more contagious variants of the coronavirus raced around the globe. The United Kingdom, which like Denmark sent droves of reality TV and sports stars to Dubai, closed its travel corridor with the UAE earlier this month.

Since the start of the pandemic, the UAE has built its coronavirus response on an “early detection strategy,” using Chinese-made coronavirus test kits to embark on one of the world’s best testing campaigns at a time when other countries were struggling to obtain and administer PCR tests. As of Friday, the country of roughly 9 million had conducted some 24.2 million coronavirus tests.

The US State Department previously raised concerns that Chinese testing material was not accurate, without providing evidence about the allegation.

Image: Tourists party on a yacht in Dubai, United Arab Emirates, Tuesday, Jan. 12, 2021. Since becoming one of the world’s first destinations to open up for tourism, Dubai has promoted itself as the ideal pandemic vacation spot. With peak tourism season in full swing, coronavirus infections are surging to unprecedented heights, with daily case counts nearly tripling in the past month, but in the face of a growing economic crisis, the city won’t lock down and can’t afford to stand still. (AP Photo/Kamran Jebreili)