Journalist and former prisoner Dilmurod Saidov knows a thing or two about the brutal rule of Uzbekistan’s first leader, the late Islam Karimov.

His house is full of reminders of the wife and daughter who died in a 2009 car crash that he never accepted was an accident, en route to visit him in a jail where he should never have served time.

“God gave me such a faithful wife and such a wonderful daughter,” he told AFP, of his partner Barno, framed in a photo on a table in his flat, and five-year-old Rukhshona, who stared out from the desktop background of a battered computer in a festive frock.

“Then he took them back again.”

Saidov, 57, is one of more than 30 people imprisoned on politically motivated charges who have been released since Karimov’s death in 2016 as new leader Shavkat Mirziyoyev takes steps to reverse the country’s isolationist course.

Mirziyoyev’s reforms have won plaudits, and seen the ex-Soviet republic — long ranked as one of the world’s worst abusers of human rights — throw its doors open to tourists and foreign investments surge.

But the new president has not publicly renounced Karimov, a man he served as prime minister for more than 13 years before stepping up as acting head of state three years ago, and has kept much of the authoritarian system intact.

In a series of interviews with AFP in the capital Tashkent, former political prisoners like Saidov acknowledged that progress had been made, but said abuses were continuing and urged the world not to turn a blind eye.

Saidov, an independent journalist, was arrested in 2009 and convicted of bribery and forgery, charges he denies and says were punishment for years of reporting on corruption and rights abuses in Karimov’s Uzbekistan.

Sentenced to 12 and a half years in prison after what Human Rights Watch called at the time “a flawed trial brought on politically motivated charges”, he was granted early release just over a year after Karimov died.

Since emerging from prison he has tried to resume his rights work, but a bid with another prominent former detainee to register a campaign group called Restoration of Justice has been refused three times by the justice ministry.

His attempts to overturn his conviction and to investigate the car crash that killed his wife and daughter have been similarly stonewalled.

Just before their deaths, he says, prosecutors threatened to take Rukhshona hostage if he did not confess to accusations of bribery and falsification of documents and testify against other citizens.

He found out about their deaths several days later from his brother.

Saidov has never believed the official version of the crash — that a truck collided with the taxi they were travelling in, killing the driver and all five passengers.

The trucker sentenced over the crash was released one year into a seven-and-a-half-year sentence, Saidov says, and died the year after he left prison.

“The staff at her kindergarten knew about (the threats),” says Saidov, who said he contracted tuberculosis in prison.

“Whoever ordered this (car crash) must have been powerful, because prosecutors are still covering it up.”

The late strongman ruled the country bordering Afghanistan with an iron fist for more than a quarter of a century.

International organisations and foreign governments have acknowledged the scale of change in Uzbekistan, a landlocked Central Asian country which once showed little shame in its status as an elite rights offender.

In August, Mirziyoyev won broad praise for ordering the closure of the notorious Jaslyk penal colony — known as the “House of Torture” for the extreme abuses inflicted on inmates — in the country’s remote northwest.

The prison, a grim calling card of Karimov’s rule, was briefly home to Akzam Turgunov, a rights activist who met Saidov during a stint in another jail and is now his partner in the Restoration of Justice group.

“It was a place they sent prisoners they wanted to break,” Turgunov told AFP.

“I thought I was mentally prepared, but when they began to drip boiling water (on my body) and told me I would not leave the place alive I was gripped by an intense fear.”

Turgunov, who was released a few months short of the end of a 10-year sentence for extortion, says Mirziyoyev’s order was an important step.

But he fears it could be a maneuver “to distract foreign rights organisations” from other abuses that he says continue to take place in the majority-Muslim republic of 33 million.

Human Rights Watch says that thousands of people are still imprisoned in Uzbekistan for political reasons.

It also said last year that ex-political prisoners like Saidov and Turgunov continue to face “legal and economic barriers… including restrictions on freedom of movement, inability to obtain court decisions needed to appeal unlawful sentences, surveillance, and inadequate medical care for health ailments stemming from their incarceration.”

Uzbekistan’s government has also been hailed for acknowledging and condemning the practice of forced labor, which was systemic in the country’s lucrative cotton harvest.

During the Karimov era, monitors who documented rights abuses including the use of school-age children as unpaid pickers were routinely detained and harassed by authorities.

One of these activists, Elena Urlaeva, was committed to state psychiatric institutions several times, and once suffered the humiliation of being watched by police as a gynecologist cavity-searched her in a bid to locate a data storage device.

“Those times are in the past, and that is good,” says Urlaeva, who now sits at the same table as government officials at events on the fight against forced labor, which the International Labour Organization said fell in Uzbekistan by half last year alone.

But — in part due to pressure on Western companies who buy the country’s cotton — the harvest has long been a source of rare international attention on Uzbekistan.

In many other facets of public life, critics say there is more continuity than change.

“Things have relaxed a bit, but there is no space for complacency,” says Umida Akhmedova, a well-known photographer and filmmaker.

She was convicted of slandering the country in 2010 after highlighting the difficult plight of young women in rural Uzbekistan.

She was amnestied immediately, following an international outcry.

Akhmedova cites ongoing judicial and police abuses as causes for pessimism, as well as widespread rights’ violations of homeowners, who have protested against forced evictions amidst a post-Karimov construction boom.

These are the sorts of issues that Saidov and Turgunov say the Restoration of Justice group would aim to address — if it were allowed to operate.

The refusal by authorities to register the group “and tens of other organisations… casts serious doubts about how deep ongoing reforms run,” says Marius Fossum, a regional representative for the Norwegian Helsinki Committee.

“Meaningful and systemic change cannot be achieved without partnering with, instead of obstructing, civil society,” Fossum told AFP in emailed comments.

For Saidov, the last year and a half have brought freedom, but also some shock over the state of civil society, which he compares to “a person in critical condition”.

The problem, he says, is simple: “The old team is still in place.” 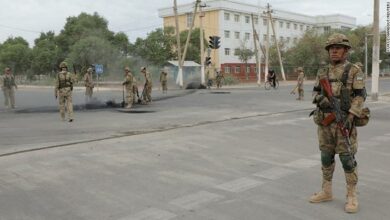