While most voters in Bulaq responded to campaigns in the area calling for a "Yes" vote, which continued into the day of the voting, voters in the neighboring Ard al-Lewa were more divided.

Both areas had unprecedentedly high turnouts amid patriotic and festive moods. People from all sectors of society, even those who hadn't participated in elections before, including housewives and elderly citizens, turned out, reassured that their votes would count for the first time.

Despite the military’s instructions forbidding campaigning on the day of the referendum, banners urging voters to cast a "yes" vote were plastered on walls right outside polling stations in Bulaq, and were raised by supporters of the amendments in the streets.

When a voter complained to army officers present, the officers said they were only responsible for preventing campaigning inside the polling station.

“I wasn’t planning to campaign, but when I saw people everywhere pushing voters to say yes, I decided to stand outside the polling station and educate voters about the amendments and let them make up their minds,” said Mahmoud Farag, a member of the 6 April movement, who is against the proposed amendments.

The majority of voters interviewed in Bulaq said they would vote "Yes" to the amendments, believing that this will restore stability and security to the country and allow the economy to recover from the effects of the revolution.

When asked for their opinion, a group of about a dozen voters in Bulaq started chanting “Yes of course,” and went on to explain their reasons.

“We want to secure our children, we want to get rid of the thugs that are attacking our houses, we want security, we are scared for our country,” said Aida Abou Bakr, echoing the widespread belief in the area that a "yes" vote would end the security gap the country has been suffering from lately.

“Have mercy on us, if we don’t work soon we’ll have to steal, we have to say yes in order to work,” said Gaber Abdel Wahab, a blacksmith, responding to a "no" voter.

Ahmed Zekry, a student at Cairo University, said he believes the majority of "yes" votes are caused by the legacy of the old regime. “For years, the result of any referendum was an automatic yes. This culture hasn’t changed yet,” said Zekry.

Zekry believes that the Muslim Brotherhood was able to convince locals to vote in favor of the amendments by using religious arguments. “When somebody tells the people that God instructs them to do something, they obey,” he said.

Claims that voting "no" is against Sharia Law were spread in the last few days through banners and religious sermons. The Muslim Brotherhood denied its affiliation with the campaign.

Meanwhile in Ard al-Lewa, queues in front of the densely populated area’s only polling station started at 7 AM. Voters lined up in impressively organized queues, one for males and one for females, which were equally long.

Since the number of voters has increased dramatically following the revolution, residents are demanding more polling stations to allow all the area’s residents to vote during the upcoming parliamentary and presidential elections.

Voters were in high spirits even four hours into their wait, elated by the feeling of empowerment and ownership of their country as they experienced voting in clean elections for the first time in their lives.

“This is our children’s future, so it deserves for us to come and wait for hours,” said Hassan Ali, a driver from Ard al-Lewa, while waiting to cast his vote for the first time. 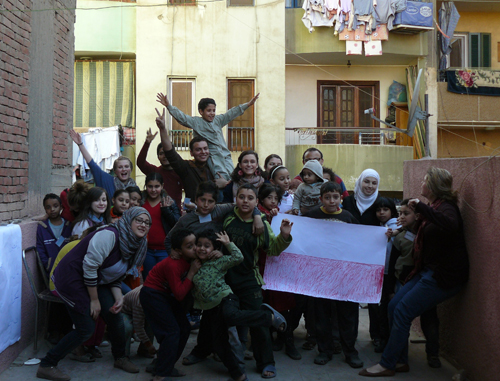 The world from their backyard: Children in Ard al-Lewa learn about differences through Safarni