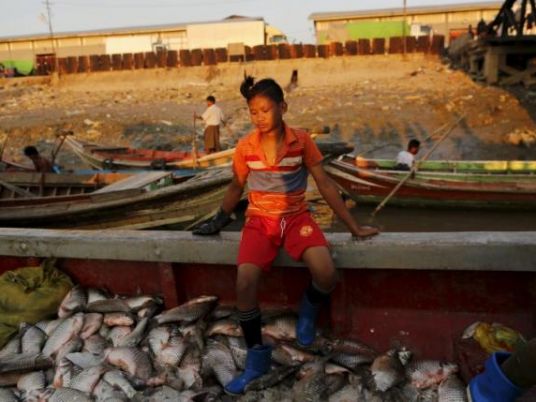 When a boat stacked with gravel moors at a jetty in Yangon, 14-year-old Aung Htet Myat fills a basket he then carries on his back to trucks that whisk the load to construction sites springing up across Myanmar's booming biggest city.

For each basket a labor broker rewards the boy with a stick he puts in a plastic bottle tied to his belt. At the end of the shift, which at the busiest times can last up to 24 hours, he exchanges the sticks for cash — 100 baskets earns him about US$2.50.

"I carry baskets with stones the whole day," said Aung Htet Myat, who has worked at the jetty for the last two years. "If there is no gravel boat to unload, I help bus drivers as an assistant."

One-in-five children in Myanmar aged 10-17 go to work instead of school, according to figures from a census report on employment published last month, and the opening up of the economy since 2011 has triggered a spike on demand for labor.

As the former Burma emerges from nearly 50 years of neglect under military rule, Yangon has been transformed into a vast construction site.

Than Than Win and her two teenage sons began working at the same jetty as Aung Htet Myat after her husband died. The family now rely on a labor broker who lends her money in return for on-demand, non-stop work when a boat arrives.

"He gives us a place to stay and we can also take money from him when we have no job," said Than Than Win, as nearby her sons carried another load of gravel on their backs. "We have no way to pay it back, so whenever he asks us to work we can't refuse."

Her story is common in Yangon's slums, filled with people who have flocked from the countryside as the economy has boomed, says Michael Slingsby, an urban poverty expert based in the city.

"People borrow money from lenders and in order to repay their debts children are being sent out to work," he said.

May Win Myint, a senior member of Aung San Suu Kyi's National League for Democracy (NLD) which took power this month, said tackling child labor was one of the party's goals.

"If we cannot solve this problem, there will not be any development in our country because they will be the people serving the country in the future," she said. "They need to be educated to do that."

To do that the first freely elected government since the early 1960s will need to address labor laws that experts say are fragmented and rarely enforced.

Myanmar law bars children under 13 from working in shops or factories, and says teenagers aged 13-15 should not work more than four hours a day, or at night.

"Nobody under 18 should be carrying heavy cargoes," said Vicky Bowman, a former British ambassador who now runs the Yangon-based Myanmar Centre for Responsible Business.

Outside of construction, child labor is most visible in hospitality, with even small children serving food in Myanmar's ubiquitous tea shops. Many children also work in fish farming and processing.

At Yangon's San Pya fish market, the country's largest, over two days in February Reuters found girls and boys as young as nine cleaning and processing fish and unloading boats and trucks during 12-hour overnight shifts.

Speaking from their home in a dilapidated bamboo hut close to the river bank, Hla Myint did not share many of his fellow citizens' high hopes for Suu Kyi's government.

"Whatever they say they would do, or give us, it will never reach here," he said. "I don't believe in any change."