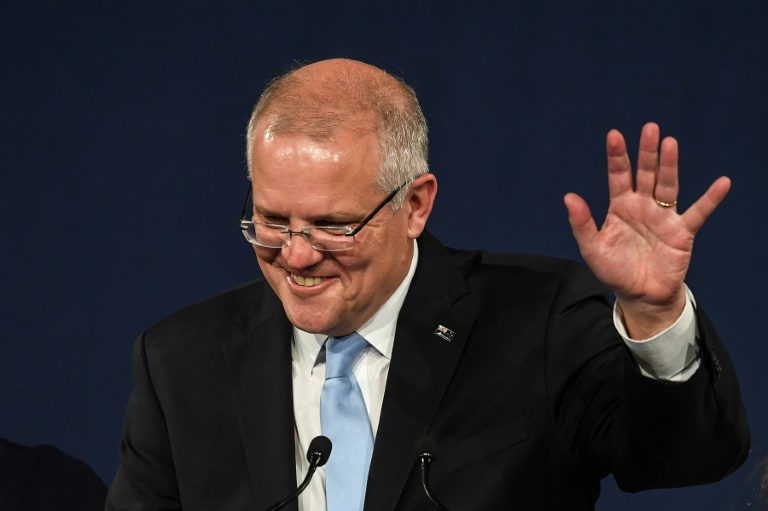 Australian Prime Minister Scott Morrison on Sunday basked in the glow of a “miracle” election victory that sparked praise from the US president, soul searching on the left and speculation about what policies he will pursue.

Morrison’s Liberal-National coalition bucked the polls to secure a victory for the ages, but it remained unclear if he would garner enough votes to have a parliamentary majority or need to govern with the help of independents.

The latest incomplete projections from the Australian Electoral Commission on Sunday showed his party at six short of the 76 seats needed for a majority in parliament.

Projections by national broadcaster ABC showed the coalition with 73 seats, and leading in the count in four others.

The 51-year-old Morrison may yet have to depend on ecologically-minded independents to pass legislation and manage deep divisions within his fractious coalition with no room for defections.

As awed Australian pundits declared Morrison a campaigning “legend”, US President Donald Trump got in on the act, sending a congratulatory tweet.

The two men spoke by phone after the results came in, vowing “close cooperation on shared priorities”, according to White House account of the call.

Trump’s allies will be quick to claim Morrison’s win as another victory in the global march of populism.

But the results showed a more mixed message from an electorate that appears increasingly split on the significant issues of the day.

Brash billionaire Clive Palmer — who explicitly styled himself on Trump in a free-spending countrywide campaign that promised to “Make Australia Great” — appears to have failed to win a single parliamentary seat.

Ex-prime minister Tony Abbott — the poster boy for the right wing of the Liberal party — was unceremoniously turfed out of office after 25 years holding the same seat, with voters opting for a green independent.

Despite his high political stock, Morrison may face a rocky three-year term.

First, he will have to contend with a challenging economic outlook and figure out how to pay for a budget based on improbable growth forecasts.

The central bank is widely expected to cut interest rates when it meets next month, in a bid to counter a housing market dip, stagnant wages and a weakening labour market.

Morrison finds himself in the unusual position of having made few promises to the electorate beyond extending tax cuts.

His campaign was relentless and disciplined — appearing on the stump before voters day-after-day to warn that the main opposition Labor party would tax voters into oblivion and that its chief, former trade union leader Bill Shorten, could not be trusted.

Enough Australians agreed, offering a clear rebuke of Shorten and his policies. But it is less clear what they voted for.

In coal-rich Queensland, voters backed new mining projects that would bring jobs, but which are fiercely opposed in much of the rest of the country.

The divisions within Morrison’s Liberals were already clear to see Sunday, with right and centrist factions racing to fill the policy void.

Some demanded an immediate loosening of rules on fossil fuel exploration, while moderates hinted at a rethink of the party’s climate skepticism.

“I have to say to you on climate change, it is real. We take it very seriously,” said Morrison’s deputy, Treasurer Josh Frydenberg.

Inside the vanquished Labor party, Shorten’s defeat and quick resignation prompted an immediate jockeying for leadership, with several party stalwarts — including long-time contender from the party’s left Anthony Albanese — set to throw their hats in the ring.

Party officials defended their decision to set out their policies in detail — which critics said provided Morrison with too big a target and made the vote a referendum on Shorten.

At least one other group was also licking their wounds.

Usually reliable pollsters had spectacularly failed to predict the election outcome and will be picking over the numbers for days and weeks to come to see what went wrong.

Australian election May 18 to be fought on refugees, economy