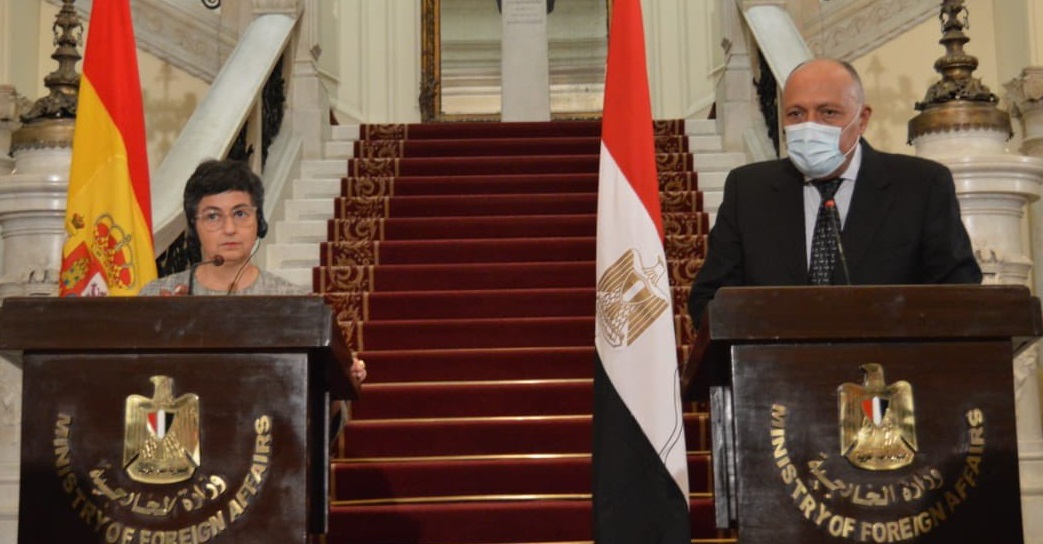 Egyptian Foreign Minister Sameh Shoukry on Saturday said that cooperation is in place with the European Union regarding tensions within the Mediterranean region and at Libya.

During a press conference with his Spanish counterpart Arancha González Laya, Shoukry said that those countries interfering in Libya are doing so to achieve their expansionary policies.

These countries do not have direct interests to justify their intervention, he noted.

Laya said that discussions with Shoukry revolved around combating terrorism and human trafficking, and said that there was agreement between Egypt and Spain on these issues.

“We talked about the tension in the eastern Mediterranean region, which cannot be solved by unilateral measures, but rather by negotiation, and we discussed cooperation with Egypt in combating terrorism,” she explained.

“We also talked about relations between the European Union and Egypt, and we support a political solution to the Libyan crisis, and we welcomed the normalization of relations between neighboring countries and Israel.”

Cairo has repeatedly criticized the move.

Since June 30, 2013 relations between Egypt and Turkey, which at the time had been supportive of the late Muslim Brotherhood President Mohamed Morsi, have remained tense amid mutual disagreements between the leaders of both countries.

Tensions escalated following Turkey’s overt intervention in Libya in favor of the Government of National Accord against General Khalifa Haftar’s forces, up until the recent announcement of a ceasefire.