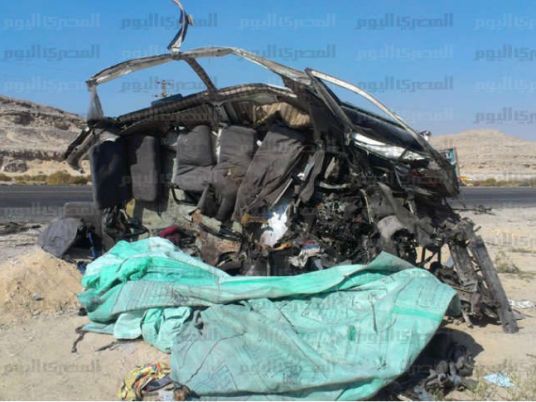 Egypt ranks 108 of 185 countries for the number of road accidents each year, according to data published in an official government report on transport issues in Egypt.

The Transport and Traffic Research Unit, affiliated to the Academy of Scientific Research and Technology, released the data at a Cairo conference on Tuesday.

The figures were quoted from a report titled "The Importance of the Role of Transport as an Engine for Development", which was compiled by various academics working under the supervision of former Transport Minister Ibrahim al-Demeiry.

The report said the number of road accident victims in Egypt stood at 15,000 deaths and 60,000 injuries in 2016, according to international reports and statistics.

Mahmoud Sakr, president of the Academy of Scientific Research and Technology, said that the rate of road accidents in Egypt can be reduced through local actions.

Sakr said he hopes Egyptian officials will one day heed the scientific studies conducted on traffic issues by research centers.

Egypt loses LE428 billion annually due to "wasted opportunities" resulting from the failure to make best use of marine, air and land transport, said Demeiry.

Around 138 million trips are made in Egypt every day, and the number is expected to double by 2030, according to Demeiry.

Egypt'sosses due to road networks amounted to LE175 billion out of a total LE428 billion, according to Hoda Talaat, assistant professor at Cairo's Faculty of Engineering .