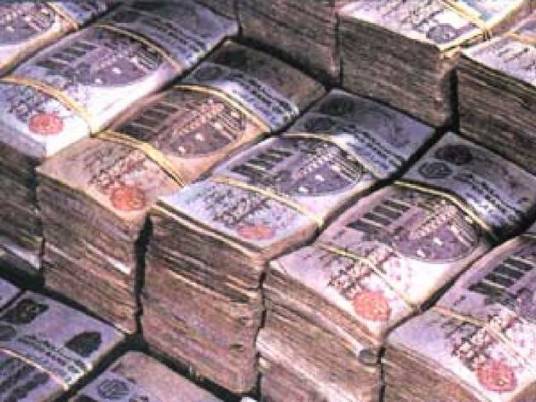 Nestled in the heart of downtown Cairo is the opulent headquarters of Arab International Bank, a secretive bank that has allowed kleptocrats to funnel money out of the country for decades with barely any regulatory oversight.
The bank, established in 1974 by a treaty signed by Egypt, Libya, Qatar, Oman and the UAE, is exempt from many Egyptian laws, customs duties and taxes and is testament to the once powerful nexus between the governments of the region.
However, the bank’s links to Egypt’s old guard, as well as the Qaddafi and Assad regime, led the bank to become a centre of controversy following the revolutions of 2011.
Operating free of the regulations governing other Egyptian banks, AIB was initially established to persuade Egyptians to bring their money back to the country after the death of president Gamal Abdel Nasser in 1970.
Nasser’s socialist policies had panicked depositors who wanted to keep their money safe from nationalisation and seizure. AIB flourished as an offshore bank and played a crucial role in jump-starting the economy during its first decade of business, providing roughly 90 percent of the letters of credit needed by the government.
But over time, the bank’s original purpose of providing a safe haven for Egyptians wary of political turbulence faded away and what was left was a nearly unregulated bank.  It became a place for powerful people to hide their wealth.
It was to be expected then, that when Egypt’s revolution began in 2011, AIB would be a target for protesters eager to purge the country of corrupt elitists.
The bank’s directors found themselves the targets of corruption accusations. Once secret accounts, inaccessible by any authority without a final court judgement, suddenly seemed likely to be revealed to the public.
And the details of those accounts would be valuable to corruption investigators. According to a source familiar with the bank, Habib El Adly, Mubarak’s infamous minister of interior, tried to move money out of the country through Arab International Bank during the 2011 uprising.
The bank’s Tahrir Square office – one of seven branches – was ransacked and burned to the ground just five days into the uprising. A few days after Mubarak resigned and handed power to the military, a Muslim Brotherhood lawyer, Mamdouh Ismail, filed a case to freeze activity at AIB until an investigation into its transactions were complete. 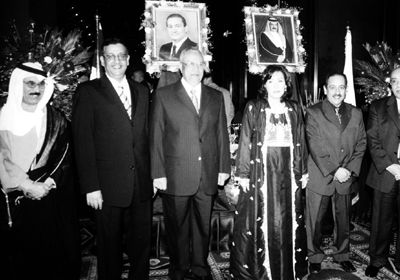 Atef Ebeid (centre) of AIB, with Gulf leaders
Within two months of the beginning of the revolution, AIB chairman Atef Ebeid was removed from his position by the military-appointed prime minister Essam Sharaf. In 2012, he was convicted on corruption charges related to “selling public assets at below value prices” and sentenced to 10 years in prison but was granted a retrial earlier this year.
For critics of the bank, Ebeid’s arrest and sentencing were proof that the secrecy and lack of oversight of the bank were exploited by members of the old regime to spirit away billions of dollars of ill-gotten money:
In 2009, two members of parliament penned an op-ed calling on Egypt to close the bank down, saying that “the bank is turning into a giant octopus that is going to swallow public money… the confidentiality the chairman imposes on bank clients, accounts and the volume of transfers makes the bank a doorway for all manner of crimes.”
But none of the claims about the bank being used by officials to move their assets out of the country have been proven by government investigators and AIB officials deny the bank was ever used to conceal the profits of using their government positions to enrich themselves.
Still, with pressure growing on the bank, the board of directors made a move to show it was transparent. In 2012, it announced the charter would be amended to allow the Central Bank of Egypt to regulate it like other banks in the country.
Nearly two years later, the bank has not yet reached a final agreement with the Central Bank on the details and implementation of that regulation.
Meanwhile, some of AIB’s top officials have come under scrutiny by activists.
The position of Mohamed AbdulJawad, the bank’s Libyan managing director and vice chairman, has triggered political wrangling in Libya – one of the five owners of the bank – because of his ties to the former regime of Colonel Muammar Qaddafi.
AbdulJawad was a key representative of Libya’s business community in negotiations with the UK and the US to remove sanctions placed on Libya after the 1988 bombing of Pan American flight 103 over the Scottish town of Lockerbie.
Adding fuel to the fire, his wife is Falak Al Assad, a cousin of Syrian President Bashar Al Assad.
A Lebanese court charged Ms Falak and two other family members last November with forging documents to gain access to money that belonged to her deceased father, Jamil Al Assad, according to an article in France’s Le Monde newspaper. The article said the family were connected to financing pro-regime militias in Syria.
While employees of the bank have come to AIB’s defence saying that the Central Bank’s oversight of the bank should be limited to prevent any damage to its competitive position, the bank has become one of the best signs that Egypt has failed to reform the leaky banking system that allowed members of the old regime to hide wealth derived from corruption and crony capitalism.
This story originally appeared on Rebel Economy
Farah Halime is the editor of Rebel Economy, a blog focused on how Middle East economies are rebuilding after the Arab Spring