The Supreme Committee for the Management of the Coronavirus Crisis in Egypt agreed, during a meeting chaired by Prime Minister Mostafa Madbouly, to allow prayer in mosques as well as Tarawih prayers during the holy month of Ramadan, provided that all precautionary measures are enforced.

The committee meeting was held on Tuesday in order to announce the precautionary rules and procedures that will be enforced during Ramada, which begins on April 13.

The committee emphasized the Egyptian government’s keenness to avoid risky behavior that Egyptians are accustomed to during the holy month.

Madbouly stressed that in order to keep everyone safe, the government will implement, with utmost firmness, all precautionary measures.

Facemasks will be mandatory in places of gathering and on public transit, he said, with violators being subject to immediate fines.

While Tarawih prayers will be allowed during Ramadan, they must be reduced to no more than half an hour in length, the committee said.

It was also agreed upon to ban charity iftar tables, Tahajjud (also known as night prayer), and Eatiikaf (staying for days in mosques for worshiping).

Any large gatherings inside mosques, including celebrations and funerals, are also banned.

The Ministry of Religious Endowments, alongside Egyptian authorities, will be following up with mosques to make sure the measures are being enforced followed.

Finally, the committee announced that “summer hours” for shops, restaurants, and other retail spaces will go into effect starting Saturday, April 17. 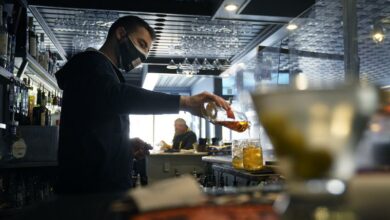