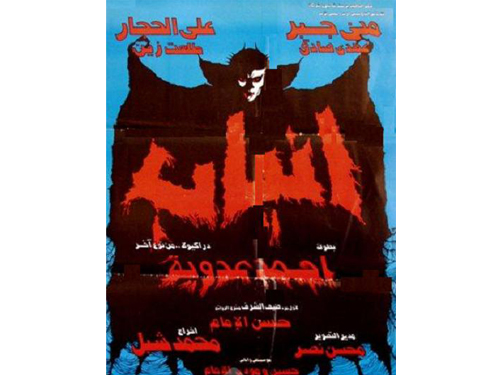 At first thought, it may seem odd that the Egyptian film industry rarely produces horror movies. The ingredients are all there: the public is, for the most part, superstitious enough to lend credence to any number of hokey, exploitative story lines, and the filmmaking community is overflowing with young talent, eager to suffer a brutal on-screen death for the sake of wider exposure. The industry’s financial and technical limitations, along with the almost insurmountable distribution difficulties that exist only to neuter any independent-minded director, should have resulted in a general shift toward the less-is-more “Blair Witch” approach to filmmaking.

Unfortunately, these reasons fail to hold up against one simple, stubborn fact: horror is pretty difficult to pull off. Things are either scary or they’re not; and when they’re not, they’re usually hilarious, in ways that are embarrassing for the filmmakers.

At their most effective, horror films will fuse elements of realism and terror in a balance so delicate it can be easily, and irreversibly, upset by the simplest error in judgment by the filmmakers. Sometimes that error will be an awkward line of dialogue, and sometimes it’s a goat that shoots lasers out of its forehead.

Ironically, it seems that fear is the most significant factor keeping horror films from getting produced.

“Producers are afraid of horror films,” explains screenwriter Haytham Waheed, who struggled for years to make his own horror film, “Camp.”

“They think that because there haven’t been many successful horror films it would be too risky to put money into one,” he says.

Looking back on the history of Egyptian horror films, it’s hard to argue otherwise. The following films represent the most significant, and revealing, examples from an extremely limited genre.

Often cited as the first Egyptian horror movie, “Safeer Juhanam” is really more of a morality tale populated by a cast of annoying characters, and one crazy devil. It’s also a comedy, made at a time when people thought “comedy” meant pointing out the obvious in a weird voice, or getting hit in the head with something.

In theory, an adaptation of "Faust" makes for a logical first attempt at horror, but the story’s universal themes fail to register. Most of the dialogue rhymes, which makes it difficult to take anyone on screen seriously, and when halfway through, the film suddenly turns into a musical, it becomes clear that nobody’s trying to scare you anymore.

A notorious over-actor in other people’s films, Wahbi sees no reason to hold back in his own, and his devil has more insane mood shifts than a hormonal teenager. At his most “evil,” he’s spinning around himself, growling and spitting like a Dracula-cloaked Tasmanian Devil; at his subtlest he stomps around, huffing and throwing his arms in the air and kicking chairs out of his way.

Like most films of its time, “Safeer Juhanam” enjoys elaborate production design and set pieces, with attention clearly given to most aspects of its making. Even the opening credits are artful, and overall the photography is well thought out. Shame about the story and acting.

Clichés: It’s based on Faust.

Social commentary: More like morals – always be happy with what you have; succumbing to temptation will likely lead to a visit from Satan.

Avoid if you’re afraid of: Overacting, adults that speak in rhyme.

Despite its release date, this horror-comedy-musical is unquestionably a product of the 1970s. Frequently – and mistakenly – referred to as a remake of “The Rocky Horror Picture Show,” “Anyab” can be more accurately described as a movie made by a guy who’s seen “The Rocky Horror Picture Show” and really wants you to know it. There’s the fact that both movies start off almost identically, and that “Anyab” includes a scene where a young Talaat Zein pulls on a Rocky Horror T-shirt while singing directly to the camera. Animation, title cards and thought bubbles liven up the action. There are fishnet stockings, floating lips and enough hip-thrusting to make you go blind, but beyond the insanity (and spandex), Shebl has an agenda of his own to follow.

“Anyab” makes the most of the “horror-as-social-commentary” ideology, taking it to a literal sense when the film’s narrator breaks the fourth wall to inform the audience that the “vampires” represent the more unscrupulous individuals in our society, those who greedily feed off of the weak for a quick reward. The film then turns into a 30-minute montage of public service announcements, where the lead couple, in a series of separate vignettes, falls prey to a doctor, plumber, cab driver, butcher, private tutor and realtor, all played by the main vampire, ending every scene by turning to the camera and smiling to reveal his fangs.

That main vampire is what makes “Anyab” worthwhile. “The Rocky Horror Picture Show” might have had a transvestite. In “Anyab,” the pot-bellied Dracula, acted by pop star Ahmed Adaweya, is hilarious, throwing endlessly sleazy “New Year’s parties,” arguing with the film’s narrator and hitting on the protagonist’s girl, all while struggling to talk through his plastic fangs. Overall, “Anyab” is a blast, except for an early scene where a chicken’s head is cut off onscreen – that was upsetting.

Avoid if you’re afraid of: Fangs, and homoerotic spandex dances.

By far the most successful entry on the list, “Al-Ins wal Djinn” did well at its time of release, probably due to its high-profile cast that includes regionally-revered comedian Adel Imam playing against type, and a young, skinny Yousra.

On a return flight to Egypt, Fatima meets Galal, who, for the rest of the film, drops all sorts of hints that he’s the devil. Despite being repeatedly described by her friends and family as a genius, it takes Fatima some time to realize why Galal can shape-shift, predict the future and close doors with his eyes. When she does, though … well, not much happens. In fact, the whole issue is resolved in a way that suggests the characters only let things get that far to satisfy their own curiosity.

“Al-Ins wal Djinn” wins points for at least trying to pass itself off as a serious horror film. Imam fares surprisingly well in a role that demands he use his bug-eyed glare for disturbing, rather than comic, effect, and an appropriate amount of time is invested in developing and sustaining a sense of tension. For every cheap “throw-a-black-cat-at-the-camera” scare, you get a genuine attempt at unsettling you moments later.

That said, the film does have its corny moments, most of which involve Galal’s displays of demonic power, or Fatima’s exorcism, during which a chicken is killed on-screen, its throat slit and the blood poured directly onto the actress.

Inspired by: “The Devil in Love” and “The Exorcist.”

Clichés: Exorcisms, ritual killings and setting fire to things by staring at them.

Six years after leaving audiences confused, Shebl gave it another go with a more adult follow-up. The disco-dancing vampires might be gone, but the social commentary is as forced and blatant, with characters staring down the camera and complaining about, of all things, the lack of imagination in the nation’s film industry. But that’s only a minor example; Shebl also attempts to open his audiences’ eyes to the dangers of real estate scams, particularly when they involve black magic.

Protagonist Mahmoud is a high school teacher, who lives with his entire family in a tiny apartment. The landlord is desperately trying to force them out to the point of enlisting the devil’s help. Like “Al-Ins wal Djinn,” the film’s opening scenes establish a sense of tension that continues to mount until, for some reason, a goat shoots a star-shaped laser out of its forehead, and everything quickly falls apart. Furniture spontaneously combusts, an invisible presence settles in Mahmoud’s apartment, and the devil rapes his wife and she thinks it’s an earthquake. Things reach their peak when, for the second time on this list, Yousra is drenched in actual chicken blood.

Whereas “Anyab's” insanity was entertaining because it was intentional, “Al-Ta’weeza” is disturbing, considering the director assumed it makes even the slightest bit of sense.

The most interesting aspect of “Al-Ta’weeza,” though, might still remain unseen, as the film seems to have been heavily censored. In existing prints it’s fairly easy to see the censor’s scribbling for a few frames between abrupt cuts. There’s a good chance the objections were made over something fairly unremarkable; but it’s still interesting to think of ways by which Egyptian censorship laws might be challenged through horror films.

Social Commentary: Unemployment, housing, lack of creativity in the film industry, and censorship.

Avoid if you’re afraid of: Goats.

“I know the film is flawed in many ways,” screenwriter Haytham Waheed readily admits about “Camp.” “But it was my first experience writing a movie of this type, and you learn as you go along."

Taking its cue from the likes of “Scream” and “I Know What You Did Last Summer,” “Camp” is the first Egyptian slasher movie. Starring a cast of unknowns and patched together by a mostly inexperienced crew, it struggles to tell the simple story of a group of vacationing teens being picked off one at a time by a deranged, masked killer.

“I remember we were filming a scene one night when the actor playing the killer fell, and needed to be hospitalized,” recalls Waheed. “We rushed him to the hospital without taking his mask off, and when the nurse saw him, she screamed and ran away.” True or not, Waheed’s anecdote is irrelevant – onscreen, the killer’s mask is almost as unconvincing as the other actors’ performances.

Despite being the shortest and most recent entry on the list, “Camp” is also the weakest in terms of both execution and concept, a straightforward Hollywood rip-off with virtually no thought put into it. But it also isn’t the film it was supposed to be.

“The film really suffers because of everything the censors took out,” claims Waheed, who had written “Camp” with the intention of making it “more violent than the films that inspired it.” Waheed felt that the film’s inevitable technical deficiencies could be compensated for by adding a gritty, ultra-violent edge to the visuals. Ultimately, little of the “shocking” footage ever ended up on screen. "The censors turned my horror film into a cartoon,” Waheed laments.

Avoid if you’re afraid of: Thirty-year-olds pretending to be teenagers.

If Waheed is to be believed, “it is very difficult for the Egyptian film industry to make a good horror movie,” and based on the examples in this list, he may be right. Aside from showcasing an inexplicable aggression toward chickens, Egyptian horror films have – to date – been unremarkable and naïve, focusing more on blood and rubber masks than exploring the mechanics of fear.

“Horror requires a lot of things that our film industry lacks,” Waheed shrugs. For him and plenty of filmmakers, these things are “experience and specific equipment.” For others, they are less tangible. Perhaps the scariest thing about the above list is that of all the titles mentioned in it, not one is based on an original idea.