Egyptian National Railways (ENR) implemented on Tuesday the decision that individuals will pay a LE20 or LE30 fine for riding “VIP” French and Spanish trains and a LE10 fine for the non-air-conditioned trains and LE5 for Alexandria’s Abu Qir Suburbs trains if the passenger is found not to have tickets.

Chairman of the ENR Ashraf Raslan clarified that the decision aims to control operations movement and increase levels of security and safety in the ENR.

Raslan added that the decision will be implemented on trains linking governorates and will exclude town trains.

He said that the ENR also mandated fines on passengers sitting on the roof of trains, standing between the trains’ vehicles, or causing damages to the railway stations, all orders part of Minister of Transport Kamel al-Waziri’s discipline plan.

The ENR published various flyers throughout railway stations asking passengers “to hold on to their tickets and hand them over at exit gates to avoid paying fines.” 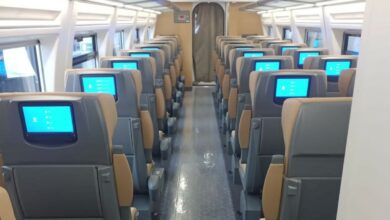