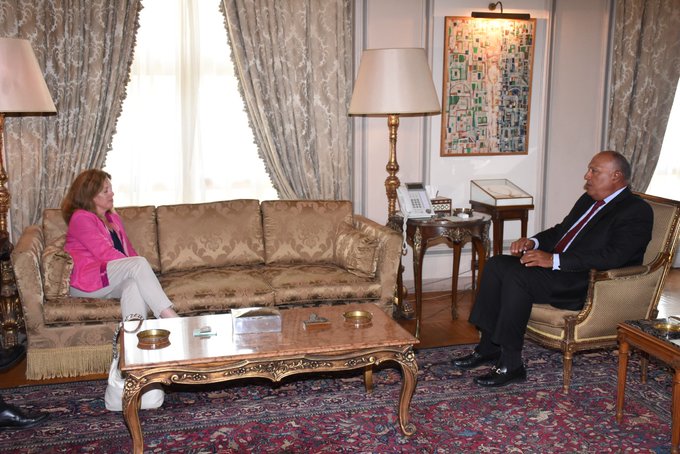 Egyptian Foreign Minister Sameh Shoukry on Sunday met with the Acting Special Representative of the UN Secretary-General (ASRSG) for Libya and head of the United Nations Support Mission in Libya (UNSMIL) Stephanie Williams.

Their meeting discussed the accelerating course of developments in Libya, according to a statement from the Egyptian Foreign Ministry on Sunday, which added that Shoukry and Stephanie shared their vision on how to reach a comprehensive political settlement in Libya.

A UNSMIL statement on Saturday warned that Libya is witnessing a dramatic turn of events which undermines the urgent need to return to a full and inclusive political process to achieve the Libyan people’s desire for a representative government and peace.

Across Libya, the UNSMIL said it is registering an increase in reported human rights violations – including arbitrary arrests and detention, restrictions placed on freedom of movement and expression, as well as on the right of peaceful assembly and protest.

It added that in Tripoli, the UNSMIL is concerned over the excessive use of force against demonstrators as well as the arbitrary arrest of a number of civilians.

On-going human right violations in Sirte include the killing of one civilian, several arbitrary arrests and illegal forced entry into private properties.

It added that a widespread use of hate speech and incitement to violence appears designed to further divide Libyans, increase polarization and tear at the country’s social fabric at the expense of a Libyan-Libyan solution.

The UNSMIL called for calm, applying the rule of law, and preserving the rights of all citizens to peacefully express their views.