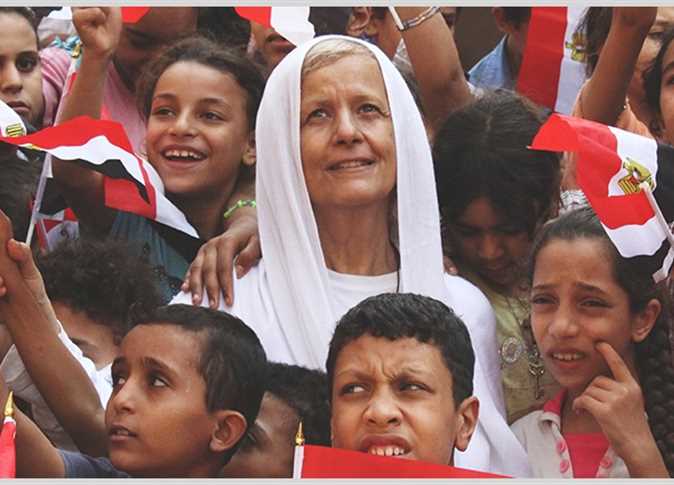 Several national and international institutions and bodies, including the Canadian Parliament, have nominated Egypt’s Magda Gobran, better known as Mama Maggie, for the 2020 Nobel Prize, according to an official announcement made by the Egyptian Ministry of Emigration and Egyptian Expatriates Affairs, on Thursday, February 13.

Canadian MP Garnett Genuis nominated Mama Maggie in recognition of her constant commitment and dedication to serving illiterate and poor women throughout Egypt.

She was previously nominated for the Nobel Peace Prize in 2012.

Mama Maggie has been honored for her humanitarian work by many prestigious organizations and international officials.

In March 2019, First Lady Melania Trump and Secretary of State Mike Pompeo honored her among ten women at the International Women of Courage Awards ceremony in Washington, DC. The ceremony was held to celebrate ten women from various countries who have shown exceptional courage and strength while driving noticeable change in their societies in the realms of social justice, human rights, peace, women’s empowerment, and gender equality, according to a statement.

Known as the “Egyptian Mother Theresa,” Mama Maggie is a Coptic Orthodox Christian who left her career as a professor at The American University in Cairo for a life of devotion working as a servant of Egypt’s Coptic church to improve the lives of underprivileged Egyptians, especially those of women and children.

Known as the founder of the charitable organization “Stephen’s Children,” Mama Maggie began her journey visiting the slums of Hay El Zabaleen in Moqattam during Easter to distribute food and clothes among the families there. Raised by a middle-class family, Gobran was shocked by the misery she saw.

She decided to establish the non-governmental organization Stephen’s Children with a clear vision: “To help save lives, bring hope, and restore dignity to underprivileged children and young people,” according to the organization’s official website.

The organization’s efforts are mainly concentrated within Egyptian slums with the aim of building strong relationships with the people who live there.

One of the organization’s main purposes is to help children by providing young people with early, elementary, and secondary education along with necessary vocational skills.

Stephen’s Children has a branch in nearly every Egyptian governorate. At each branch, well-trained volunteers facilitate the delivery of blankets, meals, medical supplies and other necessities. The organization also offers high-quality support services and counseling to disadvantaged people across Egypt’s governorates.

The organization has successfully launched nearly 100 community education centers where basic education and literacy classes are available for all ages.

In the more than 100 community education centers founded by Stephen’s Children, children receive free basic education and adults attend literacy classes. These resources aim to provide them the tools they need to earn a living wage and lift themselves out of poverty.

In 2017, Egypt’s illiteracy rate stood at 25.7 percent, according to figures from the Central Agency for Public Mobilization and Statistics (CAPMAS), with women making up the majority.

According to the 2017 figures, the rate of illiteracy among young people (15-24 years) was only 6.9 percent, compared to a much higher 63.4 percent recorded among the elderly (60 years or older). Upper Egypt has recorded the highest illiteracy rates in recent years, with around 30 percent of the population of Beni Suez governorate illiterate as of 2017.

Meanwhile, Egypt’s Central Agency for Public Mobilization and Statistics (CAPMAS) announced in November 2019 that the percentage of Egyptians living below the poverty line increased during the 2017/2018 fiscal year to 32.5 percent, compared to 27.8 percent in 2015: an increase of 4.7 percent.

According to a CAPMAS survey addressing income and expenditures in 2017/2018, the average total expenditure of families increased to LE51,000 annually, compared with LE36,000 in 2015.

World's 22 richest men have more than all women in Africa: Oxfam