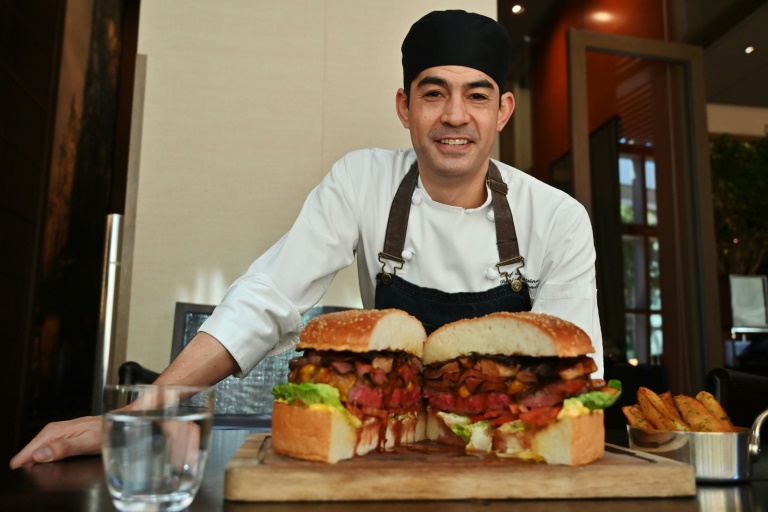 A Tokyo restaurant is honoring the crowning of the new Japanese emperor next month with a football-sized wagyu beef hamburger served between gold-dusted buns — at an eye-watering cost of $900.

It measures 25 centimeters (10 inches) in diameter and is topped with foie gras, slices of Japanese beef and freshly shaved black truffles.

“We wanted to do something to celebrate the new emperor and a new era for Japan,” head chef Patrick Shimada told AFP at a private unveiling.

“It also gets me more in touch with my Japanese roots,” added Shimada, a fourth generation Japanese American who concocted the jumbo dish.

“Doing this through an American-style burger using Japanese ingredients — it’s kind of like myself in a bun.”

The Golden Giant Burger, which commemorates the coronation of Crown Prince Naruhito on May 1 and marks the ushering in of Japan’s new Reiwa Era, will stay on the menu until the end of June — although it costs a king’s ransom.

The super-sized feast, which is sprinkled with gold flakes, will set hungry diners back a meaty 100,000 yen ($903) — but comes with a bottle of wine to help soften the blow.

Japan’s current Emperor Akihito will abdicate at the end of April, becoming the first living monarch to step down in 200 years, relinquishing the Chrysanthemum Throne to his son.

Japan revealed the name of its new imperial epoch on Monday after 31 years of the Heisei Era.

As chefs get busy grilling their giant burgers, in medieval times cooking meat — particularly beef — would have landed them in hot water.

A 1,200-year ban on the consumption of meat in Japan — first decreed in the seventh century on a seasonal basis — saw people severely punished for defying the law and was only ended by the Emperor Meiji in 1872.

Modern Japan, famous for its sushi and rich array of seafood dishes, has whole-heartedly embraced American burger culture since the end of World War II.

“There are so many burger places in Japan these days,” said Shimada. “Walk down the street and you can get a burger almost anywhere. Things catch on — and when they catch on in Japan, they kind of blow up.”

Japanese emperor stresses his peaceful reign ahead of abdication