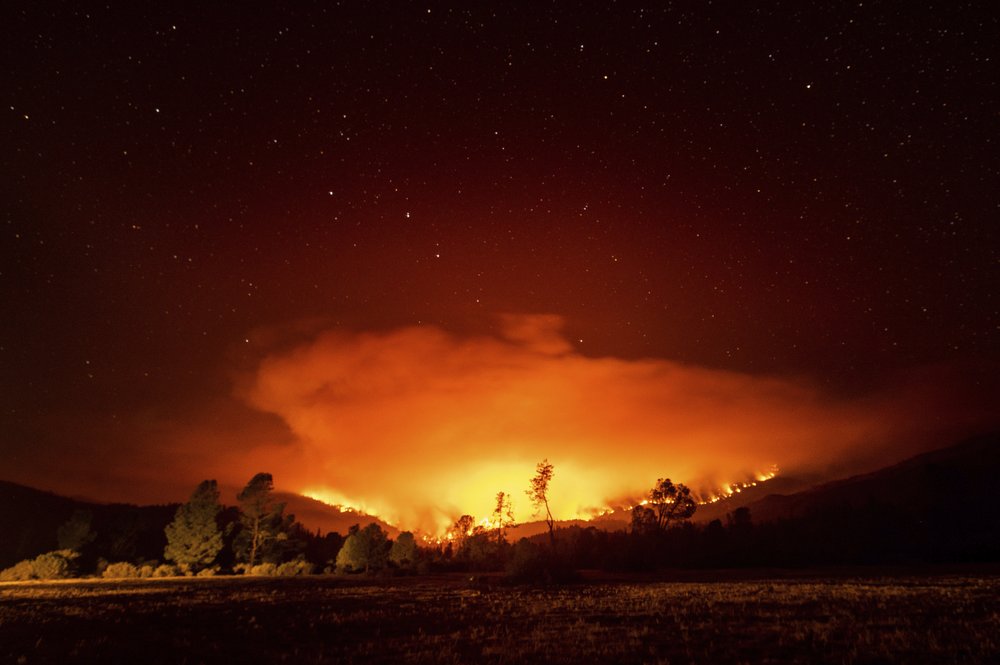 The new mark for the August Complex in the Coast Range between San Francisco and the Oregon border came a day after the total area of land burned by California wildfires this year passed four million acres, more than double the previous record.

Gov. Gavin Newsom said the amount of land scorched by the August Complex is larger than all of the recorded fires in California between 1932 and 1999.

“If that’s not proof point, testament, to climate change, then I don’t know what is,” Newsom said.

The August Complex began as dozens of fires ignited by lightning in the Mendocino National Forest in mid-August and became California’s largest fire on record in September. As of Monday, it covered nearly 1,566 square miles (4,055 square kilometers).

Since the beginning of the year, more than 8,200 California wildfires have scorched “well over 4 million acres” or 6,250 square miles, the California Department of Forestry and Fire Protection said Sunday in a statement. There have been 31 deaths and nearly 8,700 buildings have been destroyed, the governor said.

Mike Flannigan, who directs the Canadian Partnership for Wildland Fire Science at Canada’s University of Alberta, says the escalation of fires in California and the US West is “largely, not solely, due to human-caused climate change.”

The August Complex has destroyed 242 structures and damaged a half dozen. One firefighter has died and one has been injured. Containment was estimated at 54 percent on Monday.

A fire burning in Northern California wine country has burned more than 102 square miles (264 square kilometers) and destroyed more than 1,200 buildings since it started Sept. 27.

California remains largely warm and dry but fierce winds that fanned infernos a week ago were gone. Cooling at the coast was expected to expand into the interior and a Pacific storm system remained in the forecast for Northern California by next weekend.

But authorities in wine country said there it likely would not be enough rain to halt additional fires. Cal Fire meteorologist Tom Bird said the North Bay has just around a 25 percent chance of a quarter-inch of rain, the Santa Rosa Press-Democrat reported.

“Whereas we may see some rain on the fire this weekend, I do not believe it will be significant enough to be a season-ending event,” he said.

Authorities on Monday made public more information about the Sept. 17 death of Charles Morton, 39, a squad boss for the Big Bear Interagency Hotshot Crew battling the El Dorado Fire in the San Bernardino National Forest east of Los Angeles.

The U.S. Forest Service’s two-paragraph report released by the interagency Wildland Fire Lesson Learned Center states that “it appears he was burned over by the fire and passed away.”

The report dated Sept. 24 said a review team was conducting interviews with personnel “to learn from this tragic event.” It did not elaborate on the circumstances that claimed the life of the 14-year veteran.

The El Dorado Fire was ignited Sept. 5 by a pyrotechnic device a couple used for an event revealing the gender of their baby, authorities have said.

Image: FILE – In this Sept. 16, 2020 file photo the August Complex Fire burns near Lake Pillsbury in the Mendocino National Forest, Calif. The staggering scale of California’s wildfires has reached another milestone. The new mark for the August Complex Fire in the Coast Range between San Francisco and the Oregon state line on Monday, Oct. 5, 2020, surpassed 1 million acres. (AP Photo/Noah Berger, File)