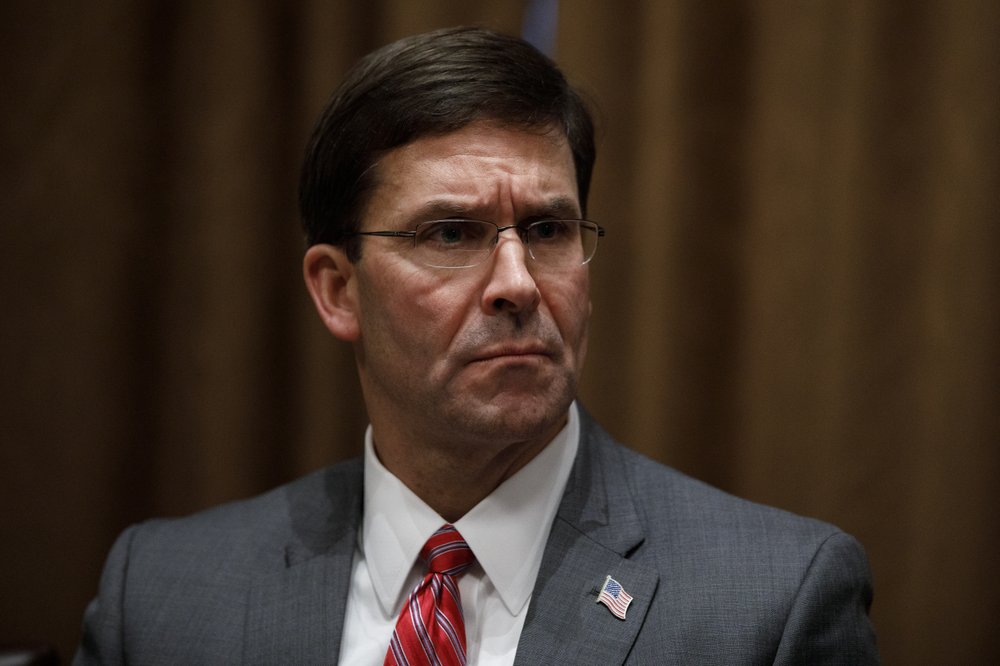 WASHINGTON (AP) — Defense Secretary Mark Esper explicitly said Sunday that he had seen no hard evidence that four American embassies had been under possible threat when President Donald Trump authorized the targeting of Iran’s top commander, raising questions about the scale of the threat described by Trump last week.

As the administration struggled with its justification for the drone strike that killed Gen. Qassem Soleimani, Esper and other officials tried to refocus attention on voices of dissent in Iran.

Esper said street protests in Tehran show the Iranian people are hungry for a more accountable government after leaders denied, then admitted shooting down a Ukrainian passenger plane. The plane was downed shortly after Iran launches strikes against US bases in Iraq in retaliation for Soleimani’s killing.

“You can see the Iranian people are standing up and asserting their rights, their aspirations for a better government — a different regime,” Esper said. He appeared on two Sunday news shows while national security adviser, Robert O’Brien, was interviewed on three others — pressing the White House’s campaign to bring “maximum pressure” on Tehran to change its behavior.

O’Brien suggested the United States sees this moment as an opportunity to further intensify pressure on Iran’s leaders, with whom the U.S. has been at odds for four decades. Iran’s leaders already are under enormous strain from economic sanctions that have virtually strangled Iran’s main source of income — oil exports.

Trump himself is under great pressure as he faces an expected impeachment trial in the Senate. Many in Congress also are upset over his handling of Iran, complaining that the administration did not consult them in advance of the Jan. 3 strike that killed Iran’s most powerful general, nor adequately brief members afterward. Trump complicated the debate by asserting on Fox News that he had to strike quickly because intelligence showed Iran could have attacked four American embassies.

Both Esper and O’Brien said they agreed that Iran might have hit more than just the U.S. Embassy in the Iraqi capital. But Esper, when asked whether there was a specific piece of evidence, replied: “I didn’t see one with regard to four embassies.″ And in response to a question about whether Trump was “embellishing″ the threat, Esper said, ”I don’t believe so.”

After the U.S. killed Soleimani in Baghdad, it appeared the backlash in Iran and elsewhere had helped Tehran by shifting the focus away from its internal problems. The strike also seemed to divert attention away from domestic unrest in Iraq over government corruption, and it intensified efforts by Iraqi politicians to expel American and other foreign forces.

But the shootdown of the Ukrainian plane on the night of the Soleimani strike, killing all 176 people aboard, opened a new avenue of pressure for the Trump administration.

“`I think the regime is having a very bad week,” O’Brien said.

“This was a regime that’s reeling from maximum pressure, they’re reeling from their incompetence in this situation and the people of Iran are just fed up with it,” he said, adding that regime change is not U.S. policy.

“The people of Iran are going to hopefully have the ability at some point to elect their own government and to be governed by the leaders they choose,” O’Brien said.

In Tehran, Iran’s security forces deployed in large numbers on Sunday. Demonstrators defied the heavy police presence to protest their country’s days of denials that it shot down the Ukrainian plane. Videos posted online showed protesters shouting anti-government slogans and moving through subway stations and sidewalks.

Earlier Sunday, Trump tweeted his support for the Iranian protesters.

“To the leaders of Iran – DO NOT KILL YOUR PROTESTERS,” Trump wrote on Twitter Sunday morning. “Thousands have already been killed or imprisoned by you, and the World is watching. More importantly, the USA is watching. Turn your internet back on and let reporters roam free! Stop the killing of your great Iranian people!

“My hunch is it was an accident,” he said, adding that although Iranian government officials initially blamed American propaganda, they ultimately “did the right thing by admitting it.” He said they need to allow a full investigation.

The Ukrainian plane crash early Wednesday killed all 176 people on board, mostly Iranians and Iranian-Canadians. After initially pointing to a technical failure and insisting the armed forces were not to blame, Iranian authorities on Saturday admitted to accidentally shooting it down with its air defenses. That acknowledgement came in the face of mounting accusations by Western leaders.

Iran downed the Ukrainian flight as Tehran braced for retaliation after firing ballistic missiles at two bases in Iraq housing U.S. forces. The ballistic missile attack, which caused no casualties, was a response to the killing of Gen. Qassem Soleimani, Iran’s top general, in a U.S. drone strike in Baghdad.

Iranians have expressed anger over the downing of the Ukrainian flight and the misleading explanations from senior officials in the immediate aftermath. Later the government took the blame for the shootdown, saying it was caused by human error.

Reviewing the dramatic sequence of events that preceded the downing of the Ukrainian jetliner Wednesday, Esper justified the U.S. killing of Soleimani as an act of self defense, and he said the U.S. foresees no more Iranian military attacks in retaliation for that. Even so, the leader of the Lebanese militant group Hezbollah, which is closely aligned with Iran, said Sunday that Iran’s missile attacks on two bases in Iraq housing U.S. forces last week were only the start of the retaliation.

Hassan Nasrallah described Iran’s military response, which caused no casualties, as a “slap” at the U.S. He called it the “first step down a long path” that will ensure U.S. troops withdraw from the region.

Democratic Sen. Chris Coons of Delaware, a member of the Senate Foreign Relations Committee, said he was concerned that “Iran has lots of ways that they can take action against us, both overt and covert, and I don’t think they’re done trying to seek revenge.″

Esper spoke hopefully of getting the NATO alliance more involved in Iraq to help train Iraqi security forces. He said this could allow him to reduce the number of American troops in Iraq, currently numbering more than 5,200, but he did not say any reduction was in the works yet.

Esper also said the administration’s offer to negotiate a new nuclear deal with Iran without precondition “still stands.” Trump’s decision to pull the United States out of an international nuclear deal with Iran in 2018 is cited by his critics as the trigger for escalating tensions that led to the killing of Soleimani.

Esper said Iran’s paramilitary Quds Force still presents a threat across the Mideast, but the specific attacks he said were being planned by Soleimani, have been “disrupted.”

Esper was pressed to comment on Trump’s statement in a Fox News interview that the president believed Soleimani had been plotting to attack four U.S. embassies. Esper said he shared the belief that Soleimani was planning attacks on multiple U.S. facilities, but Esper did not say these included four embassies.

While seeking to defend Trump’s remarks as representing the president’s personal belief, not an assertion of a specific piece of hard intelligence that four embassies had been targeted, Esper indicated there was no such piece of evidence.

“I didn’t see one with regard to four embassies,” Esper said. “What I’m saying is I share the president’s view that probably — my expectation was they were going to go after our embassies. The embassies are the most prominent display of American presence in a country.”

O’Brien seemed to agree with Trump on that point.

“It’s always difficult even with the exquisite intelligence that we have to know exactly what the targets are, but it’s certainly consistent with the intelligence to assume that they would have hit embassies in at least four countries,” O’Brien said.

Esper appeared on CBS’ “Face the Nation″ and CNN’s )State of the Union.″ O’Brien appeared on ABC’s ”This Week,″ “Fox News Sunday” and NBC’s “Meet the Press.” Coon was on Fox.

Image:  In this Oct. 7, 2019, file photo, Defense Secretary Mark Esper participates in a briefing with President Donald Trump and senior military leaders in the Cabinet Room at the White House in Washington (AP Photo/Carolyn Kaster, File)