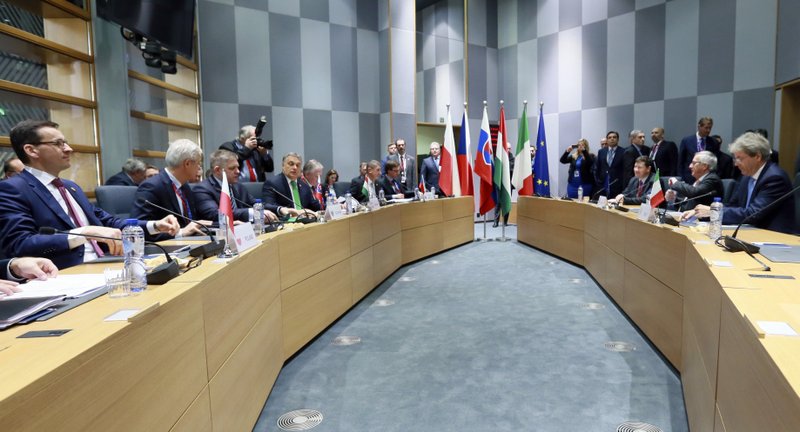 Two years after the Mediterranean migrant crisis blew a hole in the European Union, a tentative effort to patch up differences over what to do with refugees underlined continuing rifts among the bloc’s leaders.

A free-wheeling discussion over a Brussels summit dinner that began on Thursday night and spilled into the wee hours of Friday was intended to clear the air and see if there was a way to reconcile opposing views on how to reform defunct asylum rules.

But leaders emerging from nearly three hours of talks made clear that while there was little of the angry passion of 2015, when a million people flooded into Greece and headed for Germany, the “frank and sober” discussion failed to blunt sharp rifts pitting some eastern states against many of the rest.

“We have a lot of work to do,” German Chancellor Angela Merkel told reporters. “The positions have not changed.”

Divisions over how to share out relatively small numbers of refugees have poisoned relations in the EU, complicating efforts to present a united front in talks with London on Brexit and to agree an EU budget out to 2028.

Czech Prime Minister Andrej Babis called the debate “quite stormy” and told reporters that Greek Prime Minister Alexis Tsipras had been “quite aggressive.” But, he said, the eastern allies would not let the majority impose obligatory refugee quotas on them.

Merkel and Italian Prime Minister Paolo Gentiloni were among those who demanded that all countries take in a mandatory share of people requiring asylum, who have been concentrated on the Mediterranean coast, or after chaotic movements across Europe, in the richer northwest of the bloc.

German officials said Merkel has been critical of the summit chair, Donald Tusk, a former Polish premier, who in an letter to leaders earlier in the week, said that a controversial scheme of the European Commission – the EU’s executive arm – to relocate refugees around the bloc according to mandatory quotas had failed.

That echoed the complaints of the eastern sceptics but it irritated many western states and the European Commission itself.

Merkel said there was a broad appreciation for work on bolstering the bloc’s common borders, which has sharply reduced the number of people arriving, notably through deals with Turkey and Balkan states to close off the migrant route through Greece.

But she said offers from the east of “selective solidarity” – the four central European states on Thursday offered Italy 35 million euros to help hold back African migrants in Libya – could not relieve EU members of a duty to help out their allies by taking in some of those refugees who do reach Europe.

“I made very clear that I am not satisfied with the fact that the rules we have are not working,” she said. “Solidarity cannot just apply externally, but must also be internal.”

One EU official, anxious to accentuate the positive in the discussions, said Tusk had succeeded in having an honest and open debate on the most contentious issues that would help EU leaders see where there was room for compromise.

Dutch Prime Minister Mark Rutte said he would not rule out ramming through mandatory relocation quotas by majority vote next year, something Tusk has been trying to avoid to prevent a repeat of the bitter rift a similar vote caused in 2015.

A diplomat from a country in favour of compulsory quotas said there could be a move to vote if there was no consensus in sight by the time leaders discuss asylum reform in June.

Gentiloni, preparing for an election in March, insisted that such mandatory relocation was vital and should be expanded. The leaders of Luxembourg and Belgium, among others, echoed his comments.

Turkey: Merkel to work for release of EU funds for refugees