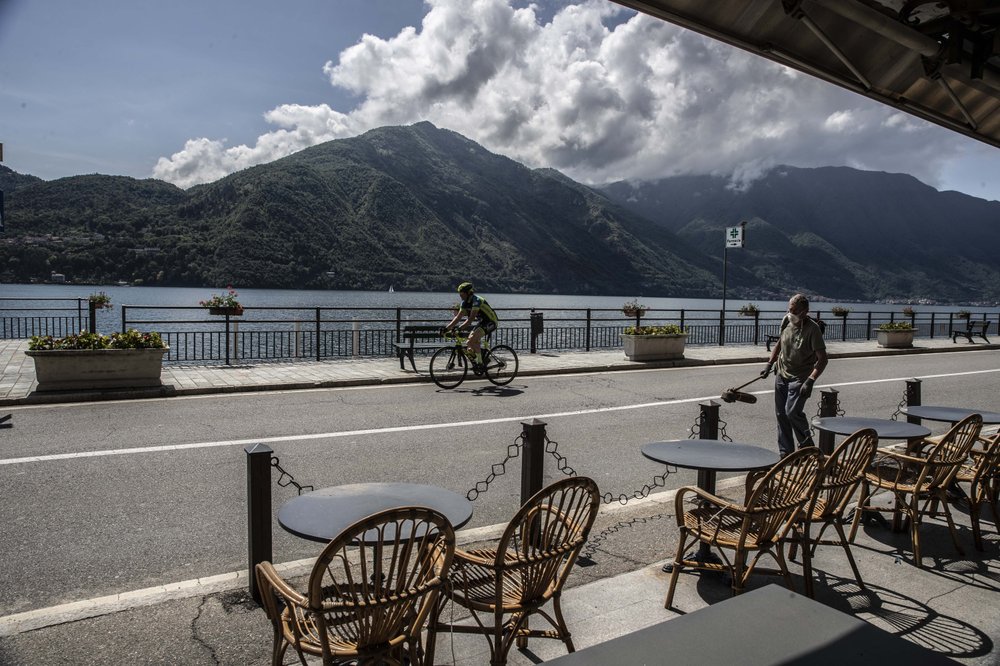 ROME (AP) — European governments promised more relief to their citizens on Thursday as a top US immunologist prepared to tell Congress that America faces its “darkest winter in modern history” unless leaders act decisively to prevent a rebound of the coronavirus.

France’s government announced an 18-billion-euro (US$19.4 billion) plan to support restaurants, hotels and other tourist facilities which have been closed since mid-March amid the coronavirus crisis.

Prime minister Edouard Philippe promised the French on Thursday that they will be able to go on vacation in France in July and August, including in French overseas territories, as the country has started lifting its lockdown this week.

Germany’s parliament approved plans to increase the amount paid to people who spend months in a government-backed short-time work program during the coronavirus crisis.

Companies are making extensive use of the program, which was credited with keeping down unemployment in the financial crisis over a decade ago. It allows them to keep employees on the payroll while they await better times.

Those announcements came after Italian Premier Giuseppe Conte promised a massive package of tax cuts and other financial aid to help businesses and families.

His government also promised to legalize the status of foreigners, many of them illegal migrants who are crop-pickers, baby-sitters and caretakers.

Italy is one of the countries worst hit by the coronavirus. But the US has the largest coronavirus outbreak in the world by far: 1.39 million infections and over 84,000 deaths, according to a tally by Johns Hopkins University. Worldwide, the virus has infected more than 4.3 million people and killed some 297,000. Experts say the actual numbers are likely far higher.

A top US immunologist who says he lost his government job because he warned the Trump administration to prepare for the coronavirus pandemic said he was ready to tell Congress that America faces its “darkest winter in modern history” unless leaders act decisively to prevent a rebound of the coronavirus.

Dr. Rick Bright’s testimony due Thursday follows this week’s warning by Dr. Anthony Fauci, the government’s top infectious disease expert, that rushing to lift store-closing and stay-at-home restrictions could “turn back the clock,” seeding more suffering and death and complicating efforts to get the economy rolling again.

But the pressure is on to staunch job losses after the US unemployment rate soared to 14.7 percent in April, the highest since the Great Depression.

The fallout from the pandemic includes heightened political tensions between nations.

Zhao appeared to be firing back against accusations from the Trump administration that China mishandled or deliberately delayed releasing information about the outbreak, first detected in the central Chinese city of Wuhan late last year.

Zhao said the US should “focus more on fighting the epidemic and safeguarding the lives and health of the American people, and stop playing such buck-passing game.”

Australia said it will push for an inquiry into the origins of the coronavirus even if it hurts trade relations with China. Prime Minister Scott Morrison had been accused of playing “deputy sheriff” to the United States after calling for the inquiry.

Morrison brushed off the criticism, telling reporters: “We have always been independent, we have always pursued our national interests, and we always will.”

The world’s public health measures continue to provoke conflict between officials and the public.

In Ethiopia, police said they arrested over 1,000 people for refusing to wear face masks in public, while in Greece a spat broke out over a government plan to install cameras in high school classrooms. The idea is to provide live-streaming to allow for reduced classroom attendance when schools reopen next week. But a privacy watchdog and a left-wing opposition party called cameras a serious privacy risk.

In many parts of the world, communities and individuals were finding inventive ways to cope with what many view as a “new normal.”

Apartment dwellers in Rio de Janeiro were getting some much-needed entertainment from children’s movies projected onto screens set up outside their buildings, similar to a drive-in theater.

Cesar Miranda Ribeiro, president of city-owned RioFilme company, said the effort, called “Cinema in the Windows,” is aimed at “trying to take care of the mental health of the people.”

Chinese people looking for some stay-at-home retail therapy have tuned into livestream shopping.

Others seeking spiritual support and human connections are worshipping remotely via online religious services, including from the Vatican to village churches.

“People in general, I think, are looking for more meaning and spirituality in the midst of all this,” said Omar Suleiman, an Islamic leader in Irving, Texas, whose Yaqeen Institute for Islamic Research has been uploading YouTube videos. “So I think there’s just a general increase in religiosity and consumption of religious content.”

For most leaders, though, the focus was a far more worldly one: how to get back to business and revive economies reeling from record numbers of job losses and chilling uncertainty.

Japanese Prime Minister Shinzo Abe on Thursday announced the lifting of an ongoing state of emergency in most parts of the country ahead of schedule.

Abe lifted the measure for 39 of the country’s 47 prefectures, effective immediately, while keeping the measure in place for eight others, including Tokyo, Osaka, Kyoto and Hokkaido, where risks still remain high.

“Today is the new beginning for our daily lives, a new normal,” Abe said, but also warning of the risk of a resurgence of the disease.

In New Zealand, malls, retail stores and restaurants reopened Thursday and many people returned to their workplaces as the nation of five million people ended most of its coronavirus lockdown restrictions. But most gatherings will be limited to 10 people and social distancing guidelines will remain in place.

By NICOLE WINFIELD and VANESSA GERA

Gera reported from Warsaw, Poland. Associated Press journalists around the world contributed to this report.

Image: A worker walks holding a lawn mower as a biker rides past a cafe outdoor tables in Tremezzo, Lake Como, Italy, Thursday, May 14, 2020. Regional governors have been pressing the government to be permitted to present their own reopening plans, taking into account the level of infection and also the growing economic crisis. (AP Photo/Luca Bruno)