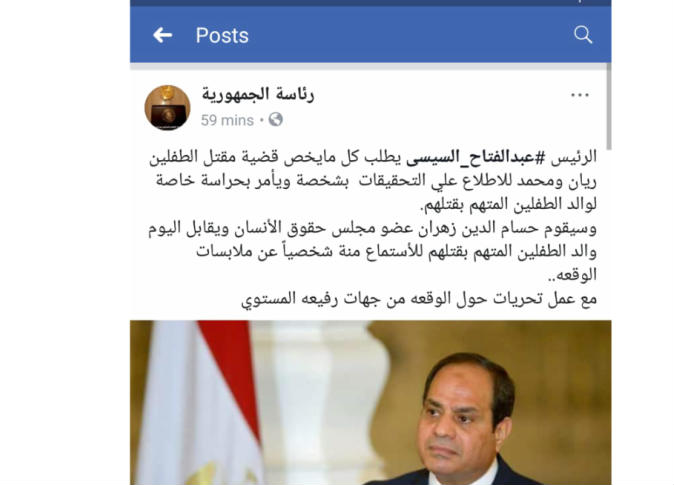 Official sources on Monday claimed that “Riasat Al-Gomhouryia” (The Presidential Page) – which reportedly pretended to be Facebook’s official page for the presidency – was “fake, and not subsidiary to any official entity”, Al-Masry Al-Youm reported.

The sources added that the administrator of the page would be tracked down, and subjected to lawful action.

Egypt Independent has tried to locate “Riasat Al-Gomhouryia”, but no verified traces of the page were found.

Nonetheless, the page entered public attention following the Damietta incident, where a father reported the deaths of his two children, only to be himself convicted of their murder.

The page reportedly wrote in Arabic, “President #Abdel Fattah Al-Sisi asks for all documents regarding the case of the murder of children Rayan and Mohamed, and is ordering their father, and murder suspect, to be kept under private security.”

It added, “Member of the Human Rights Committee Hossan Zahran will be meeting the children’s father, to personally hear his narrative, as well as high-ranked authority investigations around the incident.”

Egypt has recently initiated a crackdown on what it deems “fake news”.

In July, parliament passed a bill that allows authorities to monitor websites and social media accounts with over 5,000 followers, and to block any “fake news” publishers.

Moreover, Facebook and Twitter accounts with over 5,000 followers are perceived as media outlets, and can therefore be prosecuted for publishing either false information, or statements that could urge readers to break the law.

The post referred , Mahmoud Nazmi Al-Sayiid faced court on charges of murdering his two sons Ryan and Mohamed. The two were found dead on Wednesday, August 22,  in a water channel in Damietta.

According to Al-Watan news website, police reported that the father admitted to their murder.

The reported confession contradicts statements the father made before the children were found. On Tuesday, August 21, Al-Sayiid reported that a “strange man” had distracted him while his children vanished, and promised a large award to whoever could return his sons, or find new information on their whereabouts.