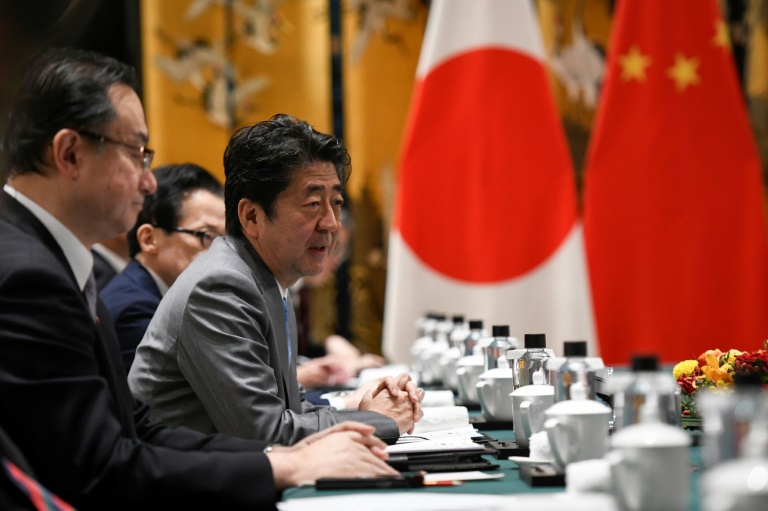 China made overtures on trade to Japan and South Korea and offered support for an infrastructure initiative as it hosted the leaders of its two neighbors this week amid strained ties with the US.

At the meeting on the sidelines of a trilateral summit in the southwestern city of Chengdu, Li added that China would “further open up its services industry” to Japan.

During a separate meeting on Monday with South Korean President Moon Jae-in, Li said China was willing to work on a rail network linking Korea with China and Europe, Yonhap news agency reported.

Li’s remarks come as China and the United States edge closer to an initial trade agreement after imposing tariffs on billions of dollars worth of goods over nearly two years in a bruising trade war that has hit the global economy.

On Friday US President Donald Trump touted a “very good talk” he had held with China’s President Xi Jinping on a deal to resolve the dispute.

However details of the so-called “phase one” deal between the world’s two largest economies have yet to be published in writing, with officials citing incomplete translation and legal work.

Meanwhile relations between the pair have been further strained by US legislators’ support for the pro-democracy movement in Hong Kong, and their condemnation of the mass internment of Muslim minorities in the western Chinese region of Xinjiang.

Li stressed on Wednesday the importance of China’s trade ties with Japan and South Korea, saying their vast volume of trade was due to the “joint protection of regional stability and peace”.

China, Japan and South Korea held a summit on Tuesday that also touched on a planned free-trade agreement between the three nations, which has been many years in the making.

Trade among the trio was worth more than $720 billion in 2018, according to a joint statement issued Tuesday night by the leaders.

The countries will “speed up the negotiations” on the agreement and “strive to realize a free, fair, non-discriminatory, transparent, predictable and stable trade and investment environment”, the statement said.

The leaders plan for the new trilateral free-trade agreement (FTA) to build on a separate, sprawling China-backed Asian trade pact, which if signed would be the world’s biggest trade deal.

That pact, called the Regional Comprehensive Economic Partnership (RCEP), was meant to account for 30 percent of global GDP and loop in half of the world’s people.

But India rejected the RCEP deal at a summit in November, dealing it a major blow.

The remaining members of RCEP, which include all 10 ASEAN states plus China, Japan, South Korea, Australia and New Zealand, are aiming to sign it next year after reviewing an agreed draft text.

“Negotiations on the trilateral FTA will become more active as soon as they are able to conclude the negotiation on RCEP,” Japanese foreign ministry spokesperson Masato Otaka said Tuesday.

Image: POOL/AFP / WANG ZHAO China said it would ‘further open up its services industry’ to Japan