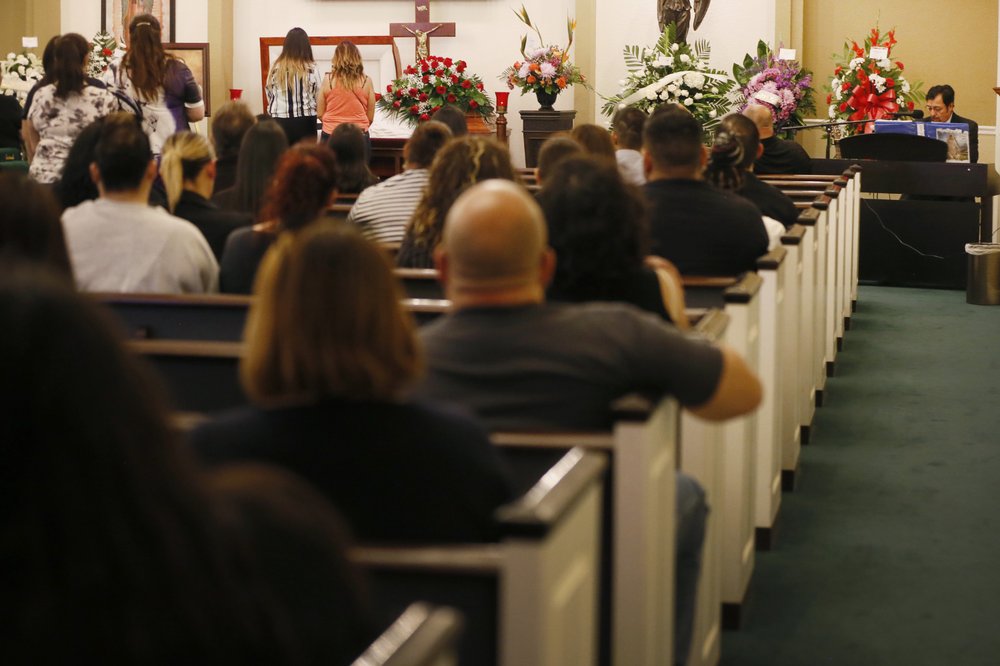 Families of those killed when a gunman opened fire at an El Paso Walmart are gathering at funerals on each side of the US-Mexico border to remember loved ones whose lives told the story of the vibrant region.

The 22 people killed ranged in age from 15 to 90, and included citizens of Mexico and the US Many had deep ties in each country, with family on each side of the border and routines that included crossing the border to shop.

The funeral for 66-year-old Alexander Hoffmann Roth was held Friday afternoon in Ciudad Juarez, Mexico, located just across the border from El Paso. Born in postwar Germany, he was serving in the German air force and stationed at Fort Bliss in El Paso when he crossed the border into Ciudad Juarez and met the Mexican citizen who would become his wife at a dance club.

“It’s an incredible binational place. I’ve had so many good memories in this area from Juarez and El Paso … the people, the food, the music, the ambiance, everything, everything is so warm,” said his daughter, Elise Hoffmann-Taus. “And this, this really hurts.”

Her father, she said, mindful of what had happened in his native country, would often talk about the importance of studying history and warned about the danger of letting hate enter one’s heart. He had crossed the border from his home in Ciudad Juarez on Aug. 3 to pick up groceries and medicine when he was killed.

She said that the long wait times to cross the border had made it harder as she tried to gather information about her father. The border waits have ballooned in recent months.

On Thursday in El Paso, a memorial service was held for 41-year-old Leonardo “Leo” Campos, who was killed along with his wife. Leo Campos grew up in the Rio Grande Valley in South Texas but had in recent years moved to El Paso.

“He would always tell me stories about the scenic view and the culture. That it was really different up here,” his brother, David Campos, who lives in San Juan, Texas, told the El Paso Times .

David Campos said he was heartened to know his brother had made so many friends in El Paso. Visiting the city for the first time for his brother’s service, David Campos made an observation: “El Paso is just a united city; no matter what has happened, it’s united.”

The service for 15-year-old Javier Amir Rodriguez is set for Saturday at an El Paso church. The teen, who was starting his sophomore year in high school, was at the Walmart with his uncle when he was killed. The avid soccer player was remembered as a fun-loving teen who was a good teammate during a vigil held Monday at the Horizon High School football stadium in El Paso.

The funeral was Friday in El Paso for 77-year-old Juan Velazquez. He and his wife, Nicholasa Velazquez, were shot Saturday after parking their car at the Walmart. She was injured and he died Monday.

Cruz Velazquez told The New York Times that his father, who was born in the Mexican state of Zacatecas, moved first to Ciudad Juarez and then to Denver, where he lived for 30 years. He eventually moved to El Paso because it was peaceful.

“He fought to get ahead in the United States,” said Cruz Velazquez, who said his father had become a US citizen.

Image: In this Thursday, Aug. 8, 2019 photo, friends and family attend the rosary for Leonardo Campos at Sunset Funeral Home in El Paso, Texas. A memorial service was held for 41-year-old Leonardo “Leo” Campos, who was killed along with his wife when a gunman opened fire at an El Paso Walmart. Leo Campos grew up in the Rio Grande Valley in South Texas but had in recent years moved to El Paso. (Briana Sanchez/The El Paso Times via AP)