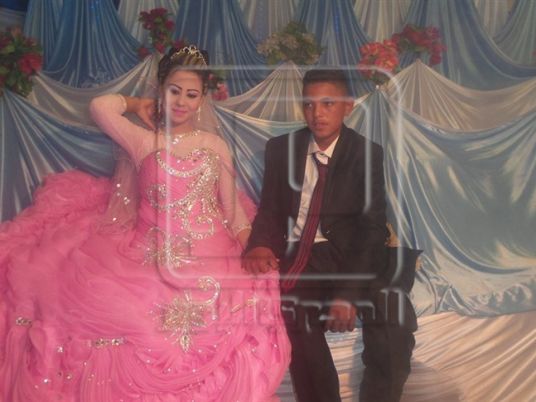 Police in the town of Belqas, Daqahlia, has summoned the members of two local families for questioning in connection with the apparent marriage of two children — Fares and Nancy — in a high-profile ceremony over the weekend.

The ceremony, in which the two children aged 10 and 12 were promised to each other, has sparked outrage in some quarters, with campaigners for child rights condemning underage marriages, which they say are against the law.

However, according to security sources, the parents have told police that the ceremony was more of an engagement party, intended to broadcast the fact that the two children had been promised to each other by their respective families. The celebration was meant to inform the public of the engagement and also to collect money for the planned wedding, family members sold police.

A relative of the groom’s family has admitted that the event did involve the signing of a marriage contract, but said that it was understood that the contract would not come into effect until the children came of legal age to marry.

In seeking to bypass the technical difficulties pose by the children being underage, the families signed a contract for an Urfi marriage, a particular type of Islamic marriage that is not registered with government authorities.

According to the relative, the groom's father said during the ceremony, "I married my son young because I want him to be a man and understand his responsibilities from a young age, and I want him to know that he has a home, a wife and duties to them."

While the familes insist that the ceremony was intended only as a form of engagement, other relatives who attended the party have  confirmed that the bride is now living in the groom’s home.

Reda al-Danbouky, executive director of the Center for Women's Guidance and Legal Awareness (CWGLA) in Daqahlia, has filed a formal report regarding the marriage, seeking to free the children from the obligation placed upon them.

Danbouky told Al-Masry Al-Youm, “I called Child Services, filed a formal report at the police station and I left all the necessary details regarding the two children.”

Officials at the Belqas police station have confirmed that an investigation will be launched regarding the marriage. They will also launch an awareness-raising campaign to counter the practice of child marriage.

They added, “This marriage is against the 2008 amendment to Child Law 12/1996 regarding child safety, which dictates that no marriage can be registered if either party is younger than 18 years of age. There are disciplinary measures taken against anyone who violates this law.”

The National Council for Childhood and Motherhood (NCCM) on Sunday announced that they acted quickly put a stop to the marriage of the two children, adding in a press statement that the two families have now signed a binding document, agreeing to not marry their children until they come of age.

The NCCM clarified that they immediately sent a representative to speak with the bride’s father, who stated that the children were not married, but merely engaged.

Dr. Hala Abu Ali, the secretary-general of the NCCM, revealed that the council spoke directly to the Attorney-General with a view to opening a formal investigation.

Abu Ali added that the marrying of children is similar to human trafficking, and involves the exploitation of the innocence and naivety of children. She urged families to protect their children and not allow them to marry so young.

"Marriages at such a young age can be extremely detrimental to children, socially, health-wise, education-wise, especially if the bride becomes pregnant so early," she said.

Meanwhile, Dr. Shawky al-Sayed, an expert in Islamic jurisprudence, said that this marriage is regarded as a crime both under Child Law and Criminal Law. He continues that the parents have committed the crime of illegally forging marriage documents, a crime that is punishable by three years in prison. The parents have also committed the crime of negligence towards their children, he said, a crime that is also punishable by a jail sentence.

Sayed adds that the Urfi marriage contracts that were signed in an attempt to make the marriage more legally acceptable will not protect the parents from legal action. It is not just the fathers who will be reprimanded, says Sayed, but the mothers too, if they knew and consented to the marriage, which seems very likely.

Lawyer Sherine Mahmoud told Al-Masry Al-Youm that, according to Egyptian Child Law, the parents of any children who are married before the legal age are subject to disciplinary action.

However, Mahmoud added that in some Egyptian villages children are married young by signing Urfi contracts, which is seen as a way around the fact that they are not yet of age. Such marriages are legitimized through a proclamation of sorts, she says.

In this case, she argues, no legal action can be taken against the families, since the marriage is not truly considered to have come into effect until the children reach the legal age of marriage.

However, in such cases, says Mahmoud, the bride is not legally allowed to ask for a divorce or alimony from her husband because she is not yet of age, and her case will not be accepted by any court.