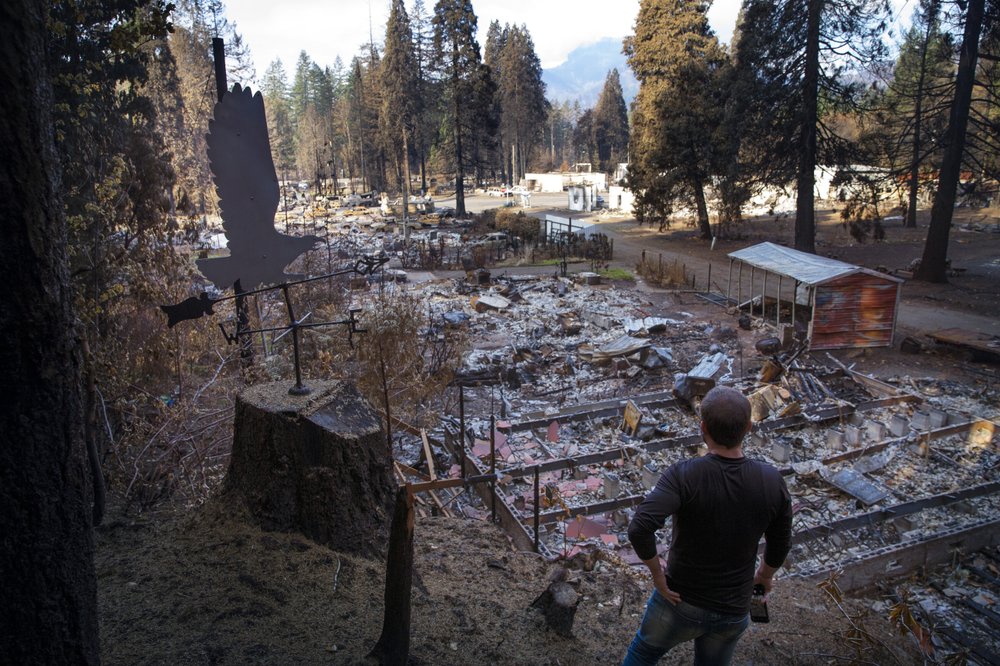 LOS ANGELES (AP) — A lack of firefighting resources in the hours after it was sparked allowed a fast-moving wildfire to make an unprecedented run through Southern California mountains and eventually find fuel in old-growth trees to become one of Los Angeles County’s largest fires ever, an official said Tuesday.

The Bobcat Fire has burned for more than two weeks and was still threatening more than 1,000 homes after scorching its way through brush and timber down into the Mojave Desert. It’s one of dozens of other major blazes across the West.

“This is a stubborn fire,” Angeles National Forest spokesman Andrew Mitchell said. Only about 100 firefighters were initially dispatched on Sept. 6 when the Bobcat Fire broke out and swiftly grew to about 200 acres (81 hectares), he said.

“To put that into perspective, normally for a fire that size we’d have at least double or triple that number of firefighters,” Mitchell said. At the time, many Southern California ground crews and a fleet of retardant- and water-dropping aircraft were assigned to multiple record-breaking blazes in the northern part of the state.

By the time staffing was ramped up, flames had found their way deep into inaccessible forest. Embers floated across mountain ridges, igniting towering trees and creating an expanding wall of fire.

“A lot of that old growth hadn’t seen fire in 40 or 50 years. The fire had a lot of places to go,” Mitchell said. The blaze had more than doubled in size over the past week to 170 square miles (440 square kilometers).

As of Monday, the fire was still advancing at one to two miles (1.6 to 3.2 kilometers) per hour at times and threatened the desert town of Pearblossom after burning into the Antelope Valley foothill area, across the San Gabriel Mountains from Los Angeles.

The blaze has destroyed or damaged at least 29 homes and other buildings, with the toll rising to perhaps 85 when damage assessment teams can complete their work this week, authorities said.

“That fire came over the hill so hard and fast that I turned around and I barely got my eight dogs and my two parrots out,” Poindexter told ABC7. “You can see everything is ash.”

Firefighters also battled flareups near Mount Wilson, which overlooks greater Los Angeles and has a historic observatory founded more than a century ago and numerous broadcast antennas that serve Southern California.

The fire was pushed by erratic winds over the weekend, although they had died down by Monday and were expected to remain light through Tuesday. About 1,100 homes and some 4,000 residents remained under evacuation orders, and the fire was only 17 percent contained, fire officials said.

Numerous studies in recent years have linked bigger US wildfires to global warming from the burning of coal, oil and gas, especially because climate change has made California much drier. A drier California means plants are more flammable.

The Bobcat Fire was one of more than two dozen major wildfires burning across California, including five of the largest in state history.

Twenty-six people have been killed. Officials were investigating the death of a firefighter at another Southern California wildfire that erupted earlier this month from a smoke-generating pyrotechnic device used by a couple to reveal their baby’s gender.

Morton, was a 14-year veteran of the US Forest Service and a squad boss with the Big Bear Interagency Hotshot Crew.

“Charlie is survived by his wife and daughter, his parents, two brothers, cousins, and friends. He’s loved and will be missed,” Morton’s family said in a statement.

In Wyoming, a wildfire that roared across a wilderness area toward cabins and a water supply reservoir for Cheyenne, the capital city, calmed down Tuesday. But predictions for more gusty winds were cause for concern. The blaze has charred over 21 square miles (55 square kilometers) of Medicine Bow National Forest. Officials were investigating signs the fire was human-caused.

More than 9,000 firefighters were battling large wildfires across Oregon and Washington, where thousands of homes have been destroyed, the Pacific Northwest Region of the US Forest Service said.