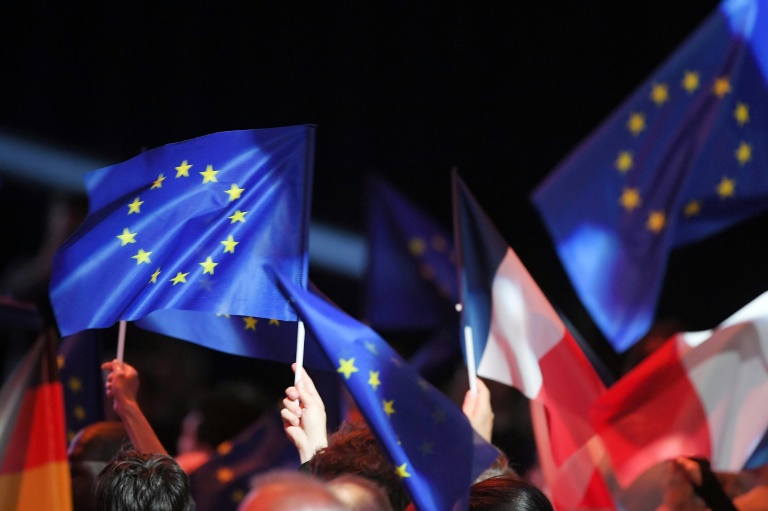 Tens of millions of Europeans will vote Sunday as 21 countries choose their representatives in a battle between the nationalist right and pro-EU forces to chart a course for the bloc.

Greece, Hungary, Bulgaria, Romania, Lithuania and Cyprus were the first to open their polling stations at 0400 GMT and France, Germany, Italy and the rest followed over the next two or three hours.

Seven EU member states had already voted, but no official results can be published until rest of the union has taken part. The European Parliament will give an estimate at 1815 GMT and provisional results will begin to emerge from 2100 GMT.

Euroskeptic parties opposed to the project of ever closer union hope to capture as many as a third of the seats in the 751-member Strasbourg assembly, disrupting the pro-integration consensus.

The far-right parties of Italian deputy PM Matteo Salvini and France’s Marine Le Pen will lead this charge, and anti-EU ranks will be swelled by the Brexit Party of British populist Nigel Farage.

France’s President Emmanuel Macron has taken it upon himself to act as figurehead for the centrist and liberal parties hoping to shut the nationalists out of key EU jobs and decision-making.

“Once again Macron is daring us to challenge him. Well let’s take him at his word: On May 26, we’ll challenge him in the voting booth,” Le Pen told a rally in France on Friday.

Meanwhile, the mainstream parties are vying between themselves for influence over the choice of a new generation of top European officials, including the powerful president of the European Commission.

And Brussels insiders are closely following the turnout figures, fearing that another drop in participation will undermine the credibility of the EU parliament as it seeks to establish its authority.

Britain and the Netherlands were first to vote, on Thursday, followed by Ireland and the Czech Republic on Friday with Slovakia, Malta and Latvia on Saturday, leaving the bulk of the 400 million eligible voters to join in on Sunday.

At the last EU election in 2014, Slovakia had the lowest turnout of any country, at less than 14 percent, and centrist president Andrej Kiska is worried that the far-right is poised to profit.

“We see that extremists are mobilizing, we see a lot their billboards and activities all over Slovakia. We can’t let someone steal Europe from us. It’s our Europe,” Kiska told reporters.

But the right and the far-right have not had everything their own way so far.

In the Netherlands, the center-left party of EU vice president Frans Timmermans won the most votes and added two seats to the Socialists and Democrats (S&D) bloc in parliament, according to exit polls.

A day later, the S&D’s center-right rival the European People’s Party (EPP) was buoyed by exit polls suggesting that Prime Minister Leo Varadkar’s pro-EU Fine Gael party was in the lead in Ireland.

If Britain leaves the European Union on October 31, the latest deadline for Brexit, then its MEPs will not sit for long in the EU parliament but could still play a role in the scramble to hand out top jobs.

Thursday’s votes from Britain won’t be counted until after polls close in Italy, but Farage’s Brexit Party appears on course to send a large delegation to a parliament it wants to abolish.

Macron is pinning his hopes on his Renaissance movement joining with the liberal ALDE voting bloc and other centrist groups to give impetus to his plans for deeper EU integration.

But much will depend on who gets the top jobs: the presidencies of the Council and the Commission, the speaker of parliament, the high representative for foreign policy and director of the European Central Bank.

The 29 EU leaders have been invited to a summit dinner on Tuesday to decide how to choose the nominees, and Germany’s Chancellor Angela Merkel is expected to back the lead EPP candidate Manfred Weber for the Commission.

Macron and some other leaders oppose both Weber, a German conservative MEP with no executive experience, and the idea that the parliament should get to choose one of its own for Brussels’ prime post.

But whichever way the leaders’ council leans, there will be no immediate decision. Instead, Council president Donald Tusk will take note of how the debate went and draft the nominations before a June 21 EU summit.

Image: AFP/File / FREDERICK FLORIN France is among the 21 countries voting Sunday in the European elections as nationalist right and pro-EU forces battle to chart a course for the bloc