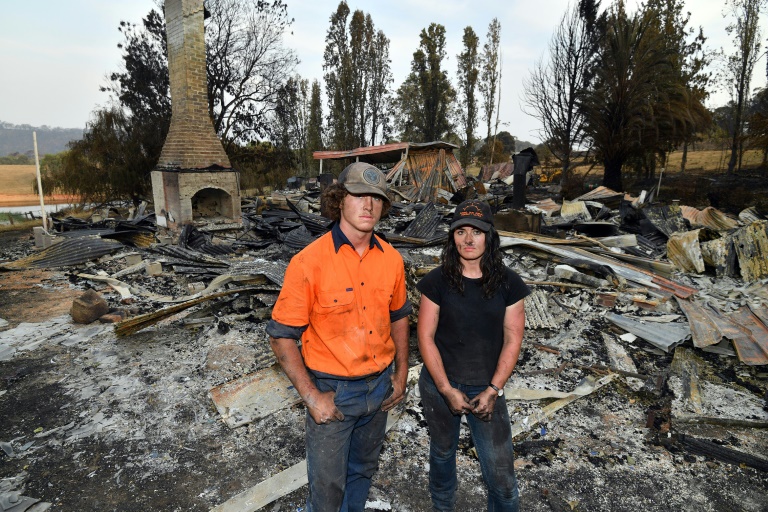 Steve Bellchambers is digging pits to bury the carcasses of livestock killed by bushfires which swept through his farm in Batlow, New South Wales.

He is one of several dozen residents who remained in the southeastern Australian town to protect his animals as authorities urged everyone to leave last week, calling the place “undefendable”.

Bellchambers lost his home and many of his animals — some he was forced to shoot to end their suffering from burns.

He did manage to save some horses, however.

“The smell is ingrained in your memory,” he told AFP.

The fires are another blow for farmers already reeling from a crippling drought that has turned agricultural land bone dry.

Across the country, tens of thousands of livestock are thought to have perished.

Bellchambers, a 45-year-old father-of-four, said the 1,000-strong local community in Batlow had vowed to pull together.

“Just because people aren’t crying, doesn’t mean they are not bleeding inside,” he said.

“A lot of people are running on adrenalin. They have to keep moving because once they stop, it will hit them.”

Stephenie Bailey watched in horror from afar as massive firestorms destroyed parts of her orchard. She returned to find her home reduced to twisted metal and charred remains.

Standing beside a patch of scorched, smouldering earth, the air thick with smoke, the 64-year-old physiotherapist expressed shock at the destruction.

“How will I ever feel truly safe again?” a tearful Bailey asked AFP.

“Your vulnerability is exposed. We were just naked in the face of these demonic fires. But we will pull through… we are going to rebuild.”

Nationwide, the bushfires have killed 26 people, destroyed more than 2,000 homes and sparked anger in affected communities at the response by authorities.

Rallies are planned for Friday calling on the government of Prime Minister Scott Morrison to step up efforts to tackle climate change, which experts say has helped fuel the blazes by increasing the length and intensity of Australia’s fire season.

Batlow — a gateway town to the Australian Alps — is known for its fruit orchards and soaring pine plantations.

Farmer John Garner, 68, said he has hardly slept in recent weeks as he battled around-the-clock to keep his cattle alive.

He was not sure how much longer he could live on the land in light of the devastation, but said he was determined to press on.

“It’s very stressful. Everything you pick up is black. Can’t do anything ‘cos it’s all black. It’s a mess,” he told AFP.

“But I’m going to try and stay and hang on. We’ve got to try and feed the country somehow.”

Image: Brother and sisters Jesse and Kiahan Bellchambers stand in front of the charred ruins of their home in Batlow, in Australia’s New South Wales state (AFP / SAEED KHAN)