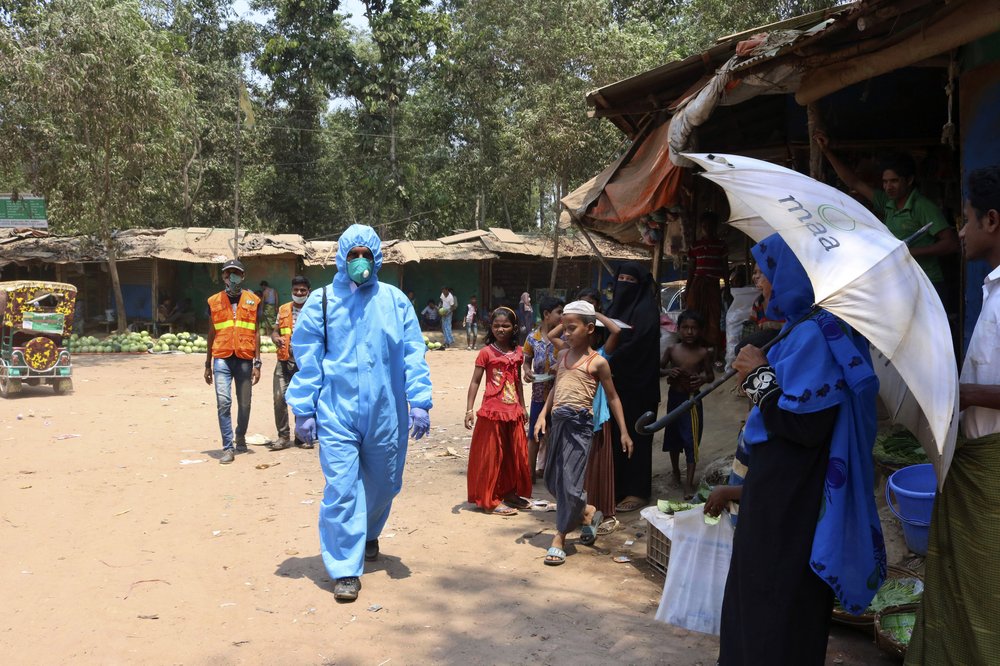 DHAKA, Bangladesh (AP) — The first coronavirus case has been confirmed in the crowded camps for Rohingya refugees in southern Bangladesh, where more than one million are taking shelter.

The infected Rohingya and a local Bangladeshi who lives in the Cox’s Bazar district who also tested positive have been isolated, Mahbub Alam Talukder, the country’s refugee commissioner, said Thursday.

Teams have been activated to treat the patients as well as trace people they may have encountered, Louise Donovan, a spokeswoman for the UN refugee agency, said.

Nationwide, Bangladesh has confirmed 18,863 cases, including 283 fatalities. But the toll is thought to be higher since adequate testing facilities are lacking in the South Asian nation of 160 million people.

Aid workers have been warning of the potential for a serious outbreak if the virus spread into the densely populated camps. Donovan said Thursday that 108 Rohingya refugees in Cox’s Bazar have been tested for the coronavirus since the beginning of April.

With about 40,000 people per square kilometer (103,600 per square mile) living in plastic shacks side by side, the 34 camps have more than 40 times Bangladesh’s average population density. Each shack is barely 10 square meters (107 square feet) and many are packed with up to 12 residents.

“Here in the camps it’s difficult to protect our health from the virus because there are so many people in a small place,” said Ro Sawyeddollah, a camp resident and executive director of the Rohingya Students Union.

The UN and the government said about 1,200 beds for isolating and treating COVID-19 patients were being readied just outside the camps at Ukhiya and Teknaf in Cox’s Bazar, and more were planned.

Aid agencies and rights groups have been demanding Bangladesh’s government withdraw restrictions on using mobile phones and internet in the camps. Authorities had suspended internet use for security reasons, and recent reports said armed groups among the refugees were allegedly involved in kidnappings and smuggling of drugs.

“Because of COVID-19, people can’t meet one another, so it’s impossible to share any messages or information without the internet,” said Ro Sawyeddollah.

Daniel P. Sullivan, a human rights advocate for aid group Refugees International, said the lack of accurate information is fueling misinformation, and “rumors abound in the camps that COVID-19 is always fatal or that the faithful will be safe.”

Most of the Rohingya have fled Myanmar since August 2017, when Myanmar’s military launched counterinsurgency operations in response to rebel attacks. Security forces have been accused of mass rapes, killings and burning thousands of homes.

Authorities in Myanmar have long considered the Muslim Rohingya to be migrants from Bangladesh, even though their families have lived in the Buddhist-majority country for centuries. Nearly all have been denied citizenship since 1982, effectively rendering them stateless. They are also denied freedom of movement and other basic rights including education.

Image: In this April 15, 2020, file photo, a health worker from an aid organization walks wearing a hazmat suit at the Kutupalong Rohingya refugee camp in Cox’s Bazar, Bangladesh. Authorities on Thursday, May 14, 2020 reported the first coronavirus case in the crowded camps for Rohingya refugees in southern Bangladesh, where more than one million refugees have been sheltered, a Bangladeshi official and the United Nations said. (AP Photo/Shafiqur Rahman, File)

No country for young women? Myanmar's battle against rape