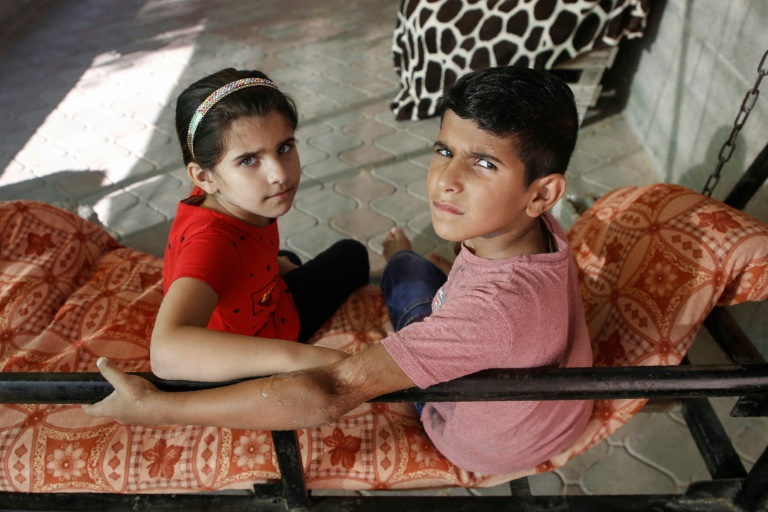 It was the summer of 2014, when a deluge of steel fell on Gaza. His back burned, his body covered in bandages, Yamin screamed from his hospital bed.

The boy had just lost 19 members of his extended family in a bombing.

Bursts of shrapnel were trapped in his body and nurses spread ointment on his raw skin as he lay in the burns unit of Al-Shifa Hospital preparing for plastic surgery.

It was during yet another war between Gaza militants — led by Hamas, the Islamist movement that rules the enclave, and Islamic Jihad — and the Israeli military.

Just after midnight on the Muslim celebration of Eid al-Fitr, an Israeli plane dropped a bomb on a building where Yamin’s family had gathered in the centre of the Gaza Strip.

The Israeli military maintained it housed a Hamas command centre with militants inside.

In an instant, 19 people were killed, including six children. Yamin, just three at the time, and his sister Geina, only several months old, survived. But they are orphans.

The door at a home in central Gaza opened, and behind it appeared a boy with sparkling eyes and brown hair.

His new parents appear. Yamin, with a mischievous smile, runs, plays, laughs and dances in the courtyard of the house with sand-colored walls.

Yamin’s uncle, Adnan, has become his father and his aunt, Yasmine Abu Jabbar, who was his mother’s best friend, became his new mum.

“All the neighbors witnessed it. Yamin cried night after night,” said Yasmine, her brown eyes peering from behind her niqab.

“For a year, Yamin asked me ‘where is my mother? How to get to her?’ The concept of death is already difficult to understand for an adult. Imagine for a three-year-old boy.”

Yasmine teaches at a primary school in Al-Nuseirat, where children dressed in worn jerseys kick up dust at sunset playing football.

She said she tried everything possible to help Yamin find some form of normality.

“The first step was to tell him, ‘Yamin, look around you. You are not alone. Many children have lost their parents and their families, but you still have a family. We are your family.'”

Yamin now lives surrounded by his new parents and his five brothers and sisters. He attends the primary school where his adopted mother teaches.

He likes Galaxy chocolate, Lionel Messi and PUBG, a combat video game rivaling Fortnite. He also likes school. But not too much.

His back is scarred, his skin still burns sometimes, and his left forearm remains deformed, which has occasionally led to mockery.

“When he began pre-school, the children made fun of him,” Yasmine said.

“One day he came to the house crying ‘I don’t want to wear t-shirts anymore.’ I ran to the pre-school and I asked the children: ‘Which one of you has super powers?’

“No one said a word. Then I said: ‘Yamin has them. He has an iron arm. He can fight a rocket with his bare hands.’ After that, Yamin began to believe that he was a superhero like Iron Man.”

The 2014 war left 2,251 dead on the Palestinian side, the majority civilians, and 74 on the Israeli side, most of them soldiers.

Five years later, broken asphalt and residential towers have been replaced in Gaza, but the story is not over for survivors.

In his glossy offices overlooking the Mediterranean, Raji Sourani and his army of lawyers keep records of around 1,000 Palestinians killed.

Sourani, founder of the Palestinian Centre for Human Rights who has demanded Israel open a war crimes investigation, said Yamin and his relatives had the right to know what happened.

“There was no reason whatsoever to legitimize any harm for this family, either bombing them, killing them, or injuring them,” he said.

But “until this moment, we didn’t receive a single answer in the last five years.”

Contacted by AFP, Israel’s army said a preliminary inquiry had been carried out, but “there was no reasonable suspicion of committing a criminal offense.”

The strike targeted a Hamas “active command and control centre”, and those killed included “at least four military operatives belonging to terror organizations,” it said.

It said militants there were “involved in military activities that endangered” Israeli soldiers.

“It was assessed that civilians were likely to be present in the building, but that the extent of the collateral damage expected to result from the attack would not be excessive in relation to the significant military advantage that was anticipated,” the army said.

In the family home in Al-Zawaida, Yasmine wiped away tears when remembering.

“You sink back into a nightmare, but at the same time I’m proud of myself when I look at Yamin,” she said.

The little “Iron Man” of Gaza now says he actually prefers another superhero: Rajul al-Ankabut, or Spiderman in Arabic.

“Because with his superpowers, he can climb all walls.”