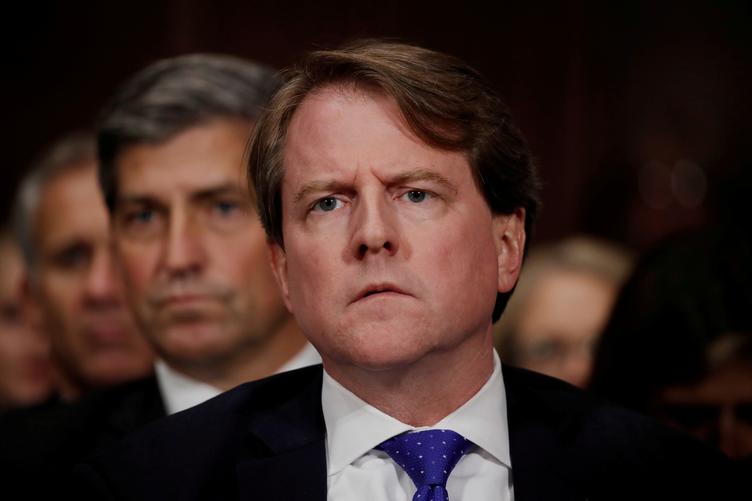 WASHINGTON (Reuters) – Former White House counsel Don McGahn must testify in the impeachment inquiry against President Donald Trump, a federal judge ruled on Monday, rejecting the administration’s assertion of immunity for officials by declaring that “no one is above the law.”

US District Judge Ketanji Brown Jackson’s ruling only legally binds McGahn. But it could give other officials, like former national security adviser John Bolton, a basis for cooperating with the Democratic-led House impeachment inquiry against the Republican president, legal experts said.

McGahn, who left his post in October 2018, in May defied a subpoena from the House Judiciary Committee to testify about Trump’s efforts to impede the now-completed special counsel investigation into Russian interference in the 2016 US election.

“Executive branch officials are not absolutely immune from compulsory congressional process – no matter how many times the executive branch has asserted as much over the years – even if the president expressly directs such officials’ noncompliance,” Jackson wrote, adding that “this result is unavoidable as a matter of basic constitutional law.”

The judge said she was not addressing the separate issue of whether McGahn could withhold information by citing executive privilege, which is intended to keep confidential the nature of discussions between a president and close aides.

The Trump administration has refused to cooperate with the impeachment inquiry as well as other Democratic-led investigations and has directed current and former officials to defy subpoenas for documents and testimony.

“We will appeal,” a Justice Department spokeswoman said by email.

William Burck, a lawyer for McGahn, said in a statement that McGahn will comply with Jackson’s decision unless it is stayed pending appeal.

The subpoena to McGahn was issued months before the House opened an impeachment inquiry in September into Trump’s actions concerning Ukraine. The committee sued McGahn in August to try to enforce the subpoena.

The judge also wrote that “compulsory appearance by dint of a subpoena is a legal construct, not a political one, and per the Constitution, no one is above the law.”

House Judiciary Committee Chairman Jerrold Nadler said that he now expects McGahn to “follow his legal obligations and promptly appear before the Committee.”

The top Democrat in Congress, House Speaker Nancy Pelosi, welcomed the decision as “yet another resounding ruling that the administration’s claim of ‘absolute immunity’ from Congress’s subpoenas has no basis in the law or our democracy, and must immediately cease.”

“The Courts have been clear: the President’s insistence that he is above the law is an offense to our Constitution and to every American,” she said in a statement.

McGahn emerged as a pivotal figure in the 448-page report completed in March by former Special Counsel Robert Mueller that detailed Russian interference in the 2016 election, through a campaign of hacking and propaganda, as well as extensive contacts between Trump’s campaign and Moscow.

Mueller’s report, released in redacted form in April, revealed about 10 instances in which Trump took actions aimed at impeding the investigation. Mueller did not exonerate Trump of obstruction of justice, though Attorney General William Barr, a Trump appointee, afterward decided that the president had not committed obstruction.

When the committee sued McGahn in August, it said it needed to speak with him to help lawmakers decide whether to include Trump’s actions toward the Mueller investigation as part of an impeachment inquiry.

According to the Mueller report, McGahn told Mueller’s team that Trump repeatedly instructed him to have the special counsel removed and then asked him to deny having been so instructed when word of the action emerged in news reports. McGahn did not carry out either instruction.

McGahn’s relationship with Trump was strained by events of the Mueller investigation. Trump replaced him with Pat Cipollone, who still holds the job.

Several aides and advisers to Trump were charged in the Mueller investigation. All but two pleaded guilty, while longtime adviser Roger Stone and former campaign chairman Paul Manafort were convicted by juries. Mueller said he found insufficient evidence to charge Trump with criminal conspiracy concerning Russia.

House Democratic leaders have focused their impeachment inquiry on Ukraine but have discussed pursuing a broader count of obstruction of Congress among any articles of impeachment – formal charges – brought against Trump. McGahn’s testimony could bolster that part of their inquiry.

House passage of any articles of impeachment would lead to a trial in the Senate on whether to convict Trump and remove him from office. The Senate is controlled by Trump’s fellow Republicans, who have shown little support for removing him.

Reporting by Jan Wolfe; Editing by Will Dunham, Noeleen Walder and Cynthia Osterman

45 years after Nixon, another US president faces impeachment