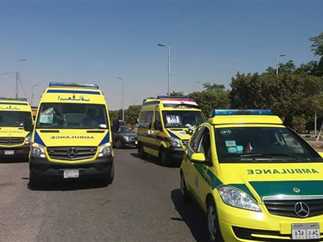 Four people have died in a collision between two private cars on Monday at Ramses Street, near the Ghamra metro station.

Police forces and two ambulances headed to the scene of the accident to clean up the debris and transfer the dead.

A claim was filed with the incident and prosecutors were notified for investigation.

Earlier on Monday five people were killed and 12 others were injured in a collision between a microbus and a bus on Abu Simbel road, Aswan.

The report adds that the main cause of accidents is the human factor, with 78.9 percent of total cases, followed by vehicle defects with 14 percent, and environmental causes (eg. road conditions) with two percent of total accidents.

Five people die and 12 others injured in Aswan collision