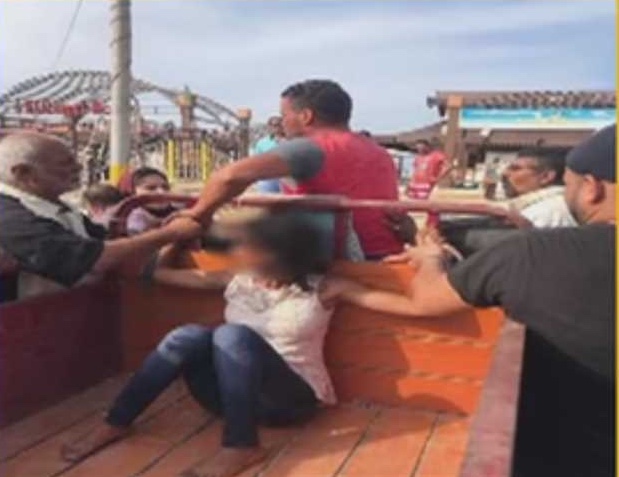 Lawyer Ahmed Abdel Salam announced that a 14 year old girl who had been tied up to a man’s tricycle has returned to her family on Monday evening, according to Al-Masry Al-Youm.

The girl was picked up by her father, who travelled from Cairo to Port Said to get her. He added that she has refused to press charges.

The incident began when a tricycle driver posted images of himself on Facebook dragging a girl attached to his tricycle. He then began brutally hitting her with a stick while she was tied up, before finally binding her to a light pole.

Upon his arrest, the driver claimed that the girl assaulted him first, leading to her arrest as well.

The driver was later proven as the aggressor after the girl’s lawyer found a witness who presented a video to the police on Monday showing the full incident. The video shows the tricycle driver assaulting the girl on Port Said beach before grabbing her by the hair and tying her to his vehicle.

The girl’s lawyer himself claimed to have been there during the incident, and that he took the case because he witnessed the incident and tried to save her from assault.

With the girl refusing to press charges however, the driver was also released.
In a phone interview with DMC channel, Salam said, “At first I thought the man was the girl’s father, but what he did proved to me otherwise. He chained her and dragged her with the tricycle and then tried to tie her to a light pole.”

He added that the countersuit that the transgressor filed was done purely out of spite, and all claims that she hit him first were false.

What actually started the incident was that the girl threw an empty water bottle which hit the tricycle driver by mistake, enraging him.

Later investigations revealed that the girl in question escaped her father’s home after he remarried following her mother’s death. She accused her stepmother of torturing her, and has lived with cousins ever since.