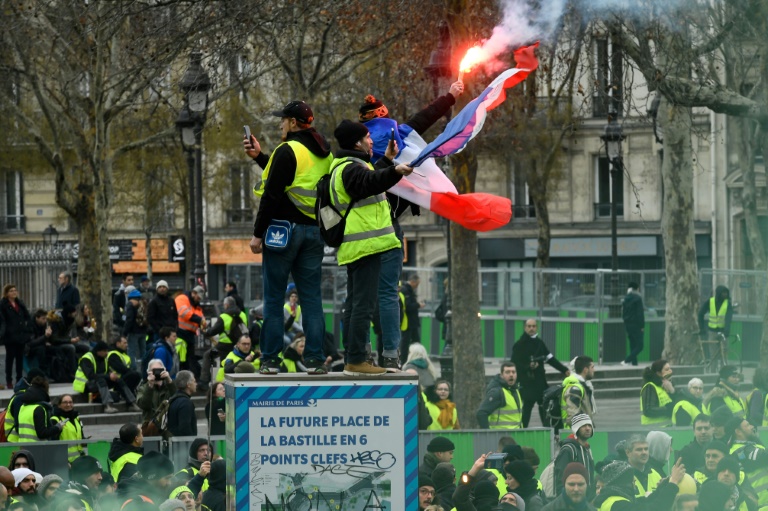 Thousands of anti-government demonstrators marched in cities across France on Saturday in a new round of “yellow vest” protests against President Emmanuel Macron, accused of ignoring the plight of millions of people struggling to make ends meet.

Officials have vowed zero tolerance for the violence that has marred the weekly protests since they began two months ago, deploying some 80,000 security forces nationwide.

In Paris, epicentre of the fiery street clashes and vandalism that have made global headlines, 5,000 riot police were on hand, using tall barricades and armored vehicles to lock down the central Place de la Concorde and surrounding districts.

Hundreds of officers were also on guard on the Champs-Elysees, where banks, jewellery stores and other shops had boarded up windows in anticipation of renewed looting and violence.

Yet many cafes and retailers on the iconic avenue remained open for business, with workers washing the windows on the first weekend of post-holiday sales.

Businesses have taken a heavy hit since the protests began in November, losing out on millions of euros in Christmas revenue as shoppers steered clear of the protests.

After easing slightly over the holidays, the protests were expected to intensify on Saturday, surpassing the estimated 50,000 who turned out for last weekend’s demos, wearing their emblematic high-visibility safety vests.

At around 11:00 am (1000 GMT), thousands of protesters gathered near the Gare de Lyon train station for a march towards the Arc de Triomphe — which had been covered in graffiti and ransacked during daylong clashes with police in November.

“We’ve come to Paris to make ourselves heard, and we wanted to see for ourselves at least once what’s going on here,” said Patrick, 37, who told AFP he had travelled from the Savoie region of western France.

Another 1,000 or so protesters gathered in Chantilly, a well-heeled horseracing town just north of Paris, where they marched through the center before descending on the hippodrome where they delayed the start of a race, local media said.

And another 1,200 protesters began gathering in the central city of Bourges, where some yellow-vest organizers were hoping to those from areas far from Paris.

Local prosecutor Joel Garrigue said five people had been detained after police discovered a cache of ball bearings during a search of their car.

The protests also spilt over the border into eastern Belgium late on Friday, where one of around 25 protesters manning a blockade died after being hit by a truck, Belgian media reported.

Officials have warned they expect this weekend’s protests to be bigger and more violent than last week when demonstrators rammed a forklift truck through the main doors of a government ministry in Paris.

Video footage of a former boxer bashing two police officers as they retreated across a bridge over the Seine river was denounced by officials who said the protesters had gone too far.

“Those who are calling to demonstrate tomorrow know there will be violence, and therefore they are in part responsible,” Interior Minister Christophe Castaner said in a Facebook interview Friday with Brut, a digital news site favored by many yellow vests.

But many yellow vests pointed to images of a police officer repeatedly striking an unarmed man on the ground during a protest last week in Toulon, accusing the police of excessive use of force.

The movement, which began as protests over high fuel taxes, has snowballed into a wholesale rejection of Macron and his policies, which are seen favoring the wealthy at the expense of rural and small-town France.

Macron has called for a national debate starting next week to hear voters’ grievances, hoping to sate demands for more of a say in national law-making and tamp down the protesters’ anger.

He has already unveiled a 10-billion-euro ($11.5 billion) financial relief package for low earners, and axed the planned fuel tax hike.

But the public consultations risk being hobbled by record levels of distrust towards politicians and representatives of the state.

And Macron may not have done himself any favors on Friday, when he told a gathering at the Elysee Palace that “too many of our citizens think they can get something without making the necessary effort.”