KHAN YOUNIS, Gaza Strip (AP) — Walid al-Aqqad’s Gaza home would be the envy of many an antiquities collector.

Pieces of Corinthian columns greet visitors in the backyard. Inside, hundreds of ancient pots and other artifacts hang on the walls or are arranged helter-skelter on shelves.

They are remnants of five millennia of Gaza’s history, from the Bronze Age to the Islamic caliphates and on down to the years of Ottoman and British rule in the 20th century. 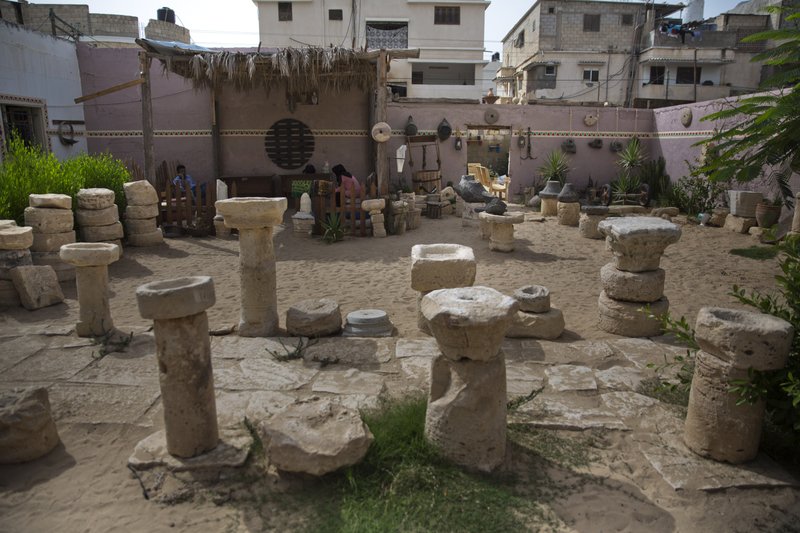 A sliver of land on the Mediterranean, Gaza was a major trade route between Egypt and the Levant going back to ancient times. But decades of uprisings, war and political turmoil have inflicted a heavy toll on its rich archaeological heritage, exposing it to looting and destruction.

The Islamic militant group Hamas seized Gaza in 2007 from forces loyal to the Western-backed Palestinian Authority. In response, Egypt and Israel imposed a blockade on Gaza that has left the territory isolated and increasingly impoverished. The Palestinians say the closures have also hindered excavations and restricted experts’ access to new discoveries. 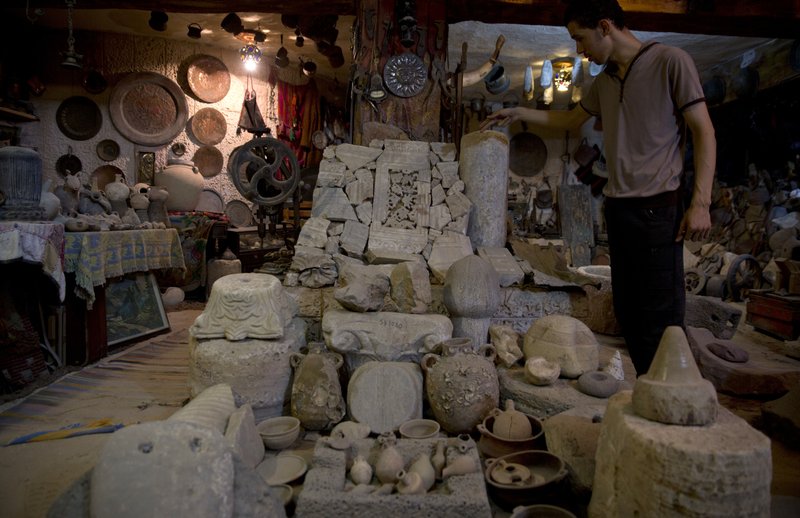 Ancient artifacts displayed inside the Shahwan private museum in the basement of a building the Gaza town of Khan Younis. (AP Photo/Khalil Hamra)

Hamas has done little to protect Gaza’s antiquities and in some cases actively destroys them. In 2017, Hamas authorities leveled large parts of Tel Es-Sakan, the remains of a 4,500-year-old Bronze Age city, to make way for construction projects.

Ayman Hassouna, professor of history and archaeology at Gaza’s Islamic University, blames Israel, the Palestinian Authority and Hamas equally for not protecting the territory’s cultural heritage. He says Israel confiscated artifacts from archaeological digs in the decades it occupied Gaza and did little to prevent antiquities trafficking. Palestinian authorities governing Gaza since 1995 have “attacked many archaeological sites — either intentionally or not,” he said.

He also blamed a lack of awareness among Gazans of the importance of preserving antiquities and leaving ancient sites undisturbed. 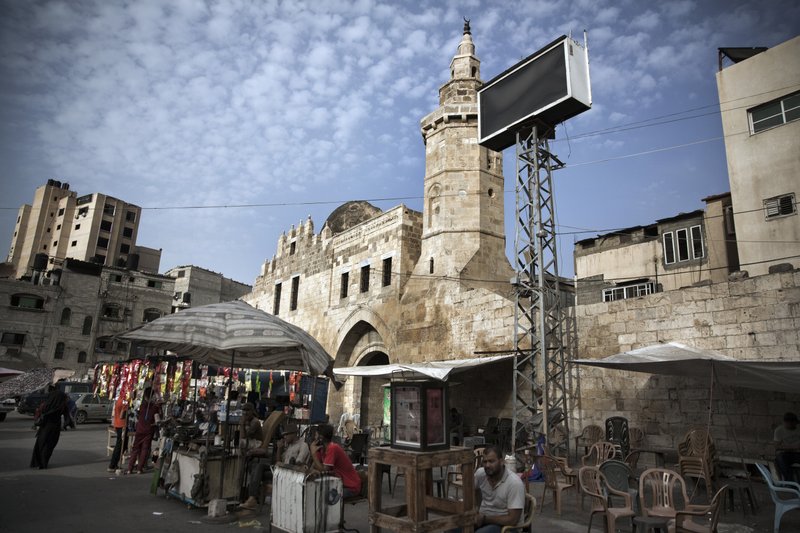 Palestinian vendors in front of the remains of the 13th century Barquq Castle, built by a Mamluk Sultan in the town of Khan Younis in Gaza. (AP Photo/Khalil Hamra)

“When they find something, they would hide it or build over it,” he said.

Antiquities plundering and trafficking also remains a problem, said Heyam al-Bitar, an archaeologist with Gaza’s ministry of tourism and antiquities. She said the ministry only learned earlier this year that dozens of ancient Greek silver coins were smuggled out of Gaza in 2016.

“It’s difficult to track down the trafficking because everything happens in the dark,” she said.

Al-Aqqad is one of few trying to save antiquities in Gaza. He began his collection in 1975, buying from collectors or searching the beach and new construction sites. Now his house in the southern city of Khan Younis is an archaeological, heritage and cultural museum, welcoming school trips and history students.

“This museum was established by personal efforts and at the expense of my children’s bread… to protect the pieces,” al-Aqqad said. 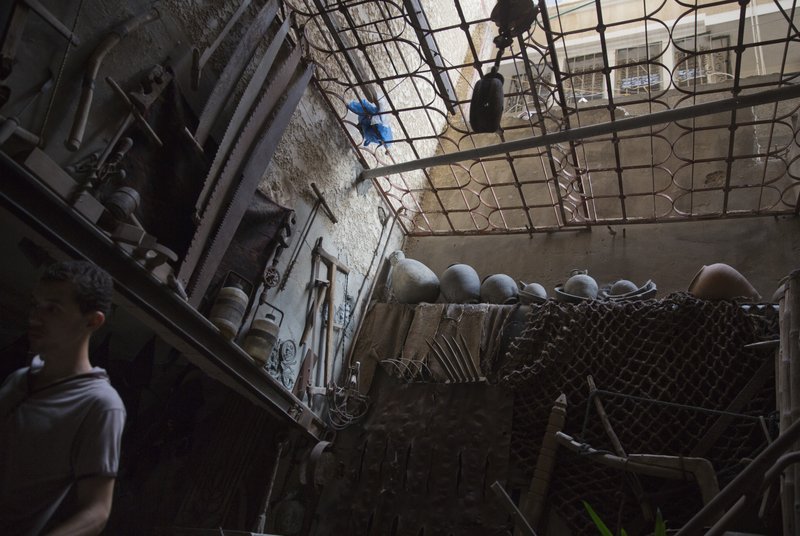 Ancient artifacts on display inside the private Shahwan museum in the basement of a building in the town of Khan Younis in southern Gaza Strip. (AP Photo/Khalil Hamra)

His is one of five legally registered private collections in the Strip, containing 10,000 artifacts and objects of historical value, according to the ministry.

The ministry keeps an inventory of all private collections to prevent artifacts from being sold or smuggled out, said al-Bitar. Owners have received training from the ministry and the Islamic University on how to preserve artifacts and restore clay objects when they fracture, she added.

The underfunded ministry opened a public museum in 2010 at al-Basha Palace, a fort built by Gaza’s Mamluk rulers in the mid-13th century. It has 350 to 400 pieces held in sparsely-filled display cases. The museum occasionally showcases pieces from the private collections, but does not have space for all of them. 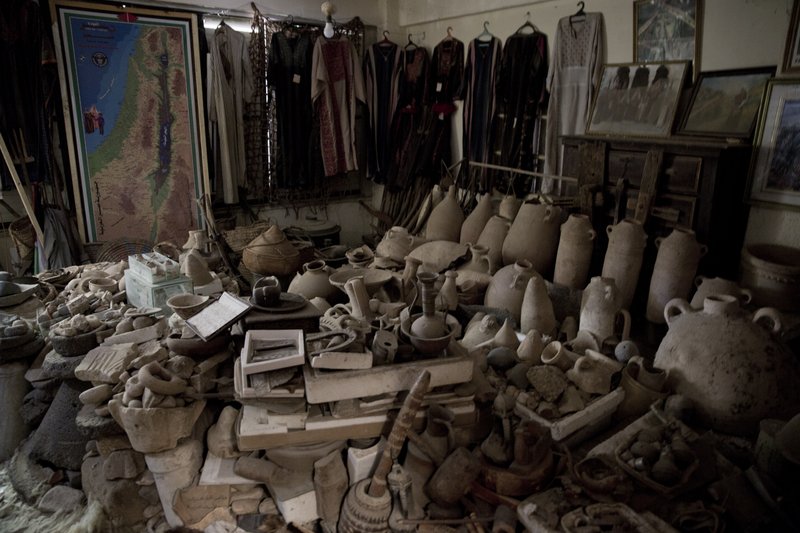 Ancient artifacts piled up inside the private Al-Aqqad museum in the town of Khan Younis in southern Gaza Strip. (AP Photo/Khalil Hamra)

“The ministry has plans to build a large national museum for all these archaeological pieces, but the political economic situation and the siege on Gaza are preventing this,” she said.

Restorers are struggling to save two of Gaza’s endangered heritage sites: a 5th century Byzantine Church in Jabaliya, discovered in 1996, and a 4th-century monastery just south of Gaza City. Since the Jabaliya church’s discovery, it has suffered from neglect and was damaged in fighting between Israel and Palestinian militants.

Last year, French NGO Première Urgence Internationale launched an ambitious 26-month project to preserve the two sites with a £1,755,000 grant by the British Council. As part of the project, protective roofs now cover the ruins and layers of sand protect ornate mosaic floors from further destruction.

By FARES AKRAM and KHALIL HAMRA

In this July 16, 2019 photo, an ancient bust of King David is displayed inside the historical Pasha Palace run by Gaza’s Ministry of Tourism and Antiquities, in Gaza City. Gaza was a major trade route between Egypt and the Levant for thousands of years, but decades of uprisings, war and political turmoil have inflicted a heavy toll on its rich archaeological heritage, exposing it to looting and destruction. Neglect by Hamas authorities and a blockade imposed by Israel and Egypt have hindered efforts to preserve and protect antiquities, leaving much of the work to private collectors. (AP Photo/Khalil Hamra)