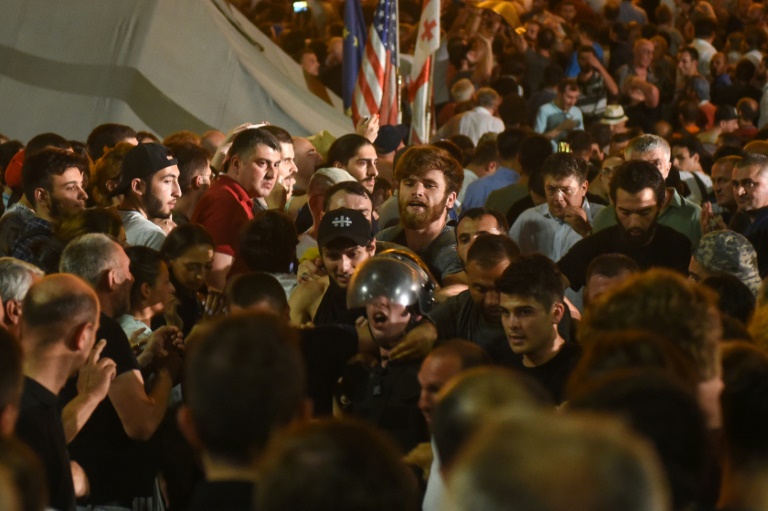 About 10,000 protesters had gathered outside parliament after a controversial address by Russian MP Sergei Gavrilov, with some breaking through riot police cordons to enter the parliament courtyard.

They were pushed back by police and the protest continued peacefully until midnight, when riot police started firing rubber bullets and tear gas.

Some 3,000 demonstrators briefly dispersed but later resumed the protest.

“Protesters demand snap parliamentary polls and the resignation of parliament speaker and the Interior Minister,” one of the leaders of the opposition European Georgia party, Gigi Ugulava, told AFP.

“We will achieve these demands through peaceful protests,” he added.

Demonstrations broke out Thursday afternoon in front of Georgia’s parliament, over Gavrilov’s address to an annual meeting of the Inter-parliamentary Assembly on Orthodoxy (IAO) — a forum of lawmakers from predominantly Orthodox countries.

The Russian MP’s presence in fiercely pro-Western Georgia’s parliament prompted outrage in the ex-Soviet nation which in 2008 fought and lost a brief but bloody war with Moscow over the breakaway regions of Abkhazia and South Ossetia.

Georgian oligarch Bidzina Ivanishvili — widely believed to be calling the shots in Georgia as the leader of his ruling Georgian Dream party — said in a statement he “fully shares the sincere outrage of the Georgian citizens”.

“It is unacceptable that a representative of the occupier country chairs a forum in the Georgian parliament,” the billionaire tycoon said.

AFP / Vano SHLAMOV In a statement, the US embassy in Tbilisi urged “all sides to remain calm, show restraint and act within the framework of the constitution at all times.”

He added he had told speaker Kobakhidze, to “immediately suspend” the IAO session.

In a statement, the US embassy in Tbilisi urged “all sides to remain calm, show restraint and act within the framework of the constitution at all times.”

It said it understood “the hurt that many people feel” in Georgia.

Headquartered in Athens, the IAO is a permanent, international forum of MPs from predominantly Orthodox-Christian countries.

Georgia and its Soviet-era master Russia have long been at loggerheads over Tbilisi’s bid to join the European Union and NATO with the spiralling confrontation culminating in a full-out war on August 8, 2008.

The Russian army swept into Georgia — bombing targets and occupying large swathes of territory – after Tbilisi launched a large-scale military operation against South Ossetian separatist forces who had been shelling Georgian villages.

Over just five days, Russia defeated Georgia’s small military and the hostilities ended with a ceasefire mediated by France’s then-president Nicolas Sarkozy, who at the time held the EU’s rotating presidency.

After the war, which claimed the lives of hundreds of soldiers and civilians from both sides, Moscow recognised South Ossetia and another separatist enclave, Abkhazia, as independent states where it then stationed permanent military bases.

Tbilisi and its Western allies have denounced the move as an “illegal military occupation.”

The two regions constitute 20 percent of the country’s territory.