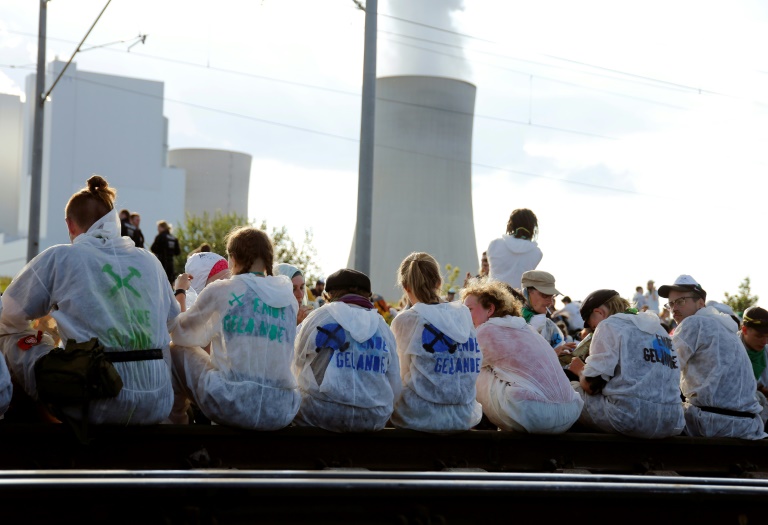 German energy giant RWE said Sunday it will be seeking prosecutions after hundreds of climate activists occupied their open-cast mine at the weekend to protest against the use of coal.

Following a cat-and-mouse game with police on Saturday, around a thousand activists invaded the vast Garzweiler lignite mine, some 43 kms (21 miles) west of Cologne.

Police say it took until Sunday morning to completely clear the area of protesters, who RWE accuse of trespassing and arson.

Around eight officers were injured during the protests, according to police, but no figures were given on how many protesters were taken into custody.

The action was part of a series of protests as Garzweiler, which covers 48 square kilometres (18 square miles), supplies lignite, or brown coal, to power stations in the region.

“The group has no sympathy for the 1,300 ‘activists’ who illegally entered the Garzweiler opencast mine and occupied the tracks on the coal supply lines,” said RWE in a statement.

“In addition, there were several arson attacks on a pump station, switch cabinets and vehicles.”

The “Ende Gelaende” (EG) protesters want to shut down RWE’s operations and end Germany’s use of climate-damaging coal-fired power stations long before the government’s cut-off target of 2038.

The German phrase “Ende Gelaende” means that something is irrevocably finished — similar to “end of story” — which is how the protesters feel about the fossil fuel age.

Many of those who took part in the occupation were school pupils and students who were part of the “Fridays for Future” demonstrations the day before.

Between 20,000 and 40,000 young activists from 17 countries flocked to Aachen near the Dutch and Belgian borders Friday for a huge show of force of the school-strike movement launched by Swedish teenage activist Greta Thunberg.

According to EG organisers, about 8000 people also took part in a rally in the small town of Keyenberg, near the Garzweiler mine, on Saturday.

Hundreds of climate protestors then entered the vast mine, bringing excavation to a standstill.

RWE say that having given “many warnings” about trespassing, they will be taking action “against all criminal offenses in connection with any occupations and blockades that have taken place”.

On Friday, 500 activists managed to cut off the supply of coal to the nearby Neurath plant, one of Germany’s main coal-fired power stations, by sitting down on the rail tracks the supply trains use.

Police said the tracks between the Neurath and Niederaussem power plants were still blocked on Sunday morning.

RWE said that despite “enormous disruption”, the “operation of the power plants and electricity generation were never at risk”.

However, “the company has suffered an economic loss, which is currently being determined”.

RWE insists it is “fully committed to climate protection targets” and says that between 2012 and 2018, the company reduced CO2 emissions by “60 million tonnes or 34 percent”.

“There is a plan on the table for phasing-out coal and there is no reason to endanger people and carry out illegal actions,” says Frank Weigand, CEO of RWE Power.

“We naturally respect the right to freedom of expression and peaceful protests such as ‘Fridays for Future’.

“But it is not acceptable to deliberately break the law under the guise of climate protection.

“Blocking tracks and entering opencast mines is dangerous and against the law.”

Climate activists block German mine despite orders to leave