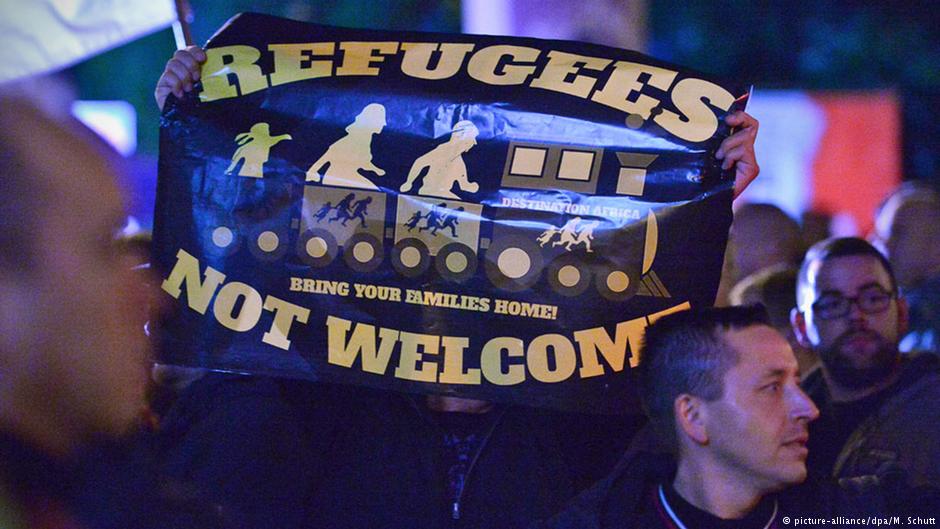 Citing a lack of trust in media coverage, AfD parliamentarians have gone to Syria to assess the security situation for themselves. The party has been pushing to declare Syria a safe country and send back Syrian refugees.

Parliamentarians with the far-right Alternative for Germany (AfD) are traveling around Syria in an unusual trip this week in hopes of boosting the party’s efforts to send back half a million Syrian refugees currently living in Germany.

On Tuesday, members of the AfD posed for pictures with allies of Syrian President Bashar Assad and snapped pictures of women walking on the streets of Damascus, posting about their trip on social media.

The seven-man team is comprised of four Bundestag MPs as well as state parliamentarians from the populous, western state of North Rhine-Westphalia (NRW). Other than Damascus, the group plans on visiting Homs and Aleppo during their trip — all areas which are mostly controlled by the Assad government.

Helmut Seifen, the deputy leader of the AfD’s parliamentary party in the NRW state parliament, told DW the MPs taking part in the trip hope to determine “whether there is war everywhere, or if there are safe areas as well.”

He emphasized that it was a “private” trip that did not have a direct connection to the AfD’s refugee repatriation proposal, but said the AfD expects to receive a report after the group returns on Friday. Seifen said MPs would likely only travel to “safe” areas.

“The goal of the trip is to thoroughly inquire on site about the humanitarian situation and reconstruction work in areas which have been liberated from terrorists,” the party said in a statement cited by German news magazine Der Spiegel. The statement added that German media couldn’t be trusted in its coverage of the conflict.

“We will visit educational institutions and talk to representatives of many faith communities,” Christian Blex, an AfD state parliamentarian from NRW, told right-wing site Compact Online before the trip. “We will also talk to government officials.”

Blex was one of several AfD politicians who traveled to the Russia-annexed Crimea last month to speak out against Western sanctions. The group traveled through Moscow, a move seen as illegal by the Ukrainian government. The trip was criticized by both Kyiv and Berlin.

In 2011, Hassoun threatened to send suicide bombers to Europe and the US in the event of Western intervention in the Syrian conflict. He is a close ally of Assad’s government.

Turkey launched an incursion into the northern Syrian territory of Afrin in January, seeking to kick out the US-backed Syrian Kurdish militia and backing rebels fighting Assad.

The AfD group did not elaborate on the parameters it’s using to judge the security and humanitarian situation during their trip, but they voiced surprise at the level of normalcy in the government-controlled capital.

“We have lived through the harshness of war in Germany before and we are still aware of the suffering it brings. We were surprised when we saw people going about their normal lives in Damascus,” Blex told reporters, according to the state-owned, pro-Syrian government news website Tishreen.

Before arriving in Damascus, Röckemann remarked repeatedly on the “cleanliness” of the streets and airport of Beirut, Lebanon from where the group ostensibly set out for Syria.

Blex was also impressed by the amount of afternoon traffic bustling through the Syrian capital, as well as a pair of women wearing jeans on the street.

“Blue jeans instead of a black veil! Women sit in bars. Barely imaginable in Mecca — also sadly not in Berlin-Neukölln,” Blex wrote on Twitter, adding that the German government “supports ‘rebels’ who want to force women into burqas.”

Some Syrians have responded wryly to the AfD politicians’ assessment of the situation in their country, where areas like eastern Ghouta are under daily bombardment and have been described by UN chief Antonio Guterres as “hell on Earth.”

“That’s it guys, our demand to wear tight jeans has been granted and that means all our problems have been solved… let’s return home! Let the chips fall as they may,” Syrian journalist Yaacob Kaddoury wrote on Facebook.

Parliamentarian Omid Nouripour brought up the Syrian government’s current assault on eastern Ghouta, writing on Twitter that it was “disgusting” that AfD politicians are “being courted in palaces in Damascus while their ‘hosts’ throw bombs on children less than 15 kilometers away.”

According to Seifen, the group informed the German Foreign Office of its plans to travel to Syria, but a ministry spokesperson said the office had not been informed. A travel warning for Syria remains in place for all Germans.

The AfD’s first proposal upon entering parliament late last year was to call on the German government to designate Syria as a safe country of origin.

They argued that the war in the country was nearly over and that Berlin should immediately initiate talks with Assad to repatriate Syrian refugees in Germany. They called for them to be repatriated “in safe areas.”

Many Syrian refugees currently living in Germany fled the country because they opposed the regime or fled the military draft, and now fear for their safety should they return.

Yemeni immigrants focus on future in US amid war back home

Eastern Ghouta: Who's to blame for the mayhem?