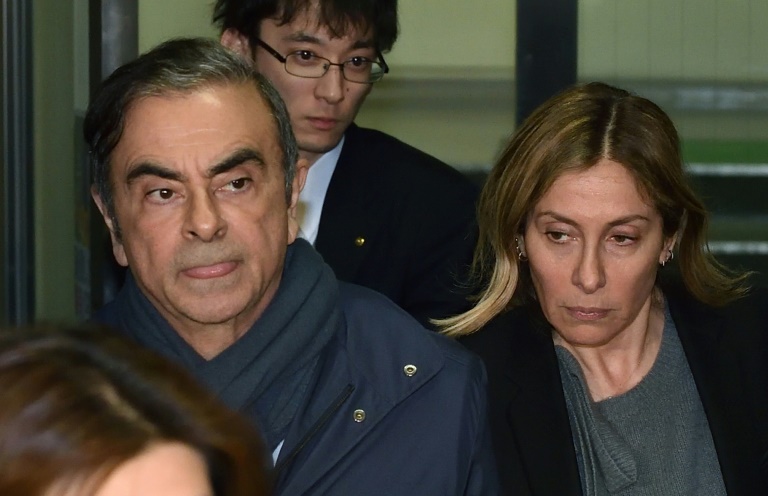 Arrested former Nissan boss Carlos Ghosn is set to name the people he believes are responsible for his downfall in Japan, his wife said in an interview on Sunday as she fled Tokyo out of fear she could be detained.

Ghosn was re-arrested last week in the Japanese capital over fresh allegations of financial misconduct which will see him held in custody until at least April 14.

Speaking to the Journal du Dimanche newspaper in France, his wife Carole detailed the latest twists in the extraordinary saga, saying that Ghosn had recorded a video interview in English before his detention.

“He names the people responsible for what has happened to him. The lawyers have it. It will be released soon,” she told the newspaper.

Carole added that she had fled Tokyo on a flight to Paris — with support from the French ambassador to Tokyo — because she “felt in danger.”

Despite her Lebanese passport being confiscated by Japanese authorities, Carole said she was able to use her American passport to board a flight and was accompanied by the ambassador to the airport.

“He didn’t leave me until the plane,” she explained. “Up to the last second, I didn’t know if they were going to let me fly. It was surreal.”

The role of the French ambassador could lead to fresh friction between the countries over the highly sensitive case, which involves Nissan and French car maker Renault, which were both previously run by Ghosn.

Other reports in Japan say that investigators are looking into allegations that company money allegedly misused by Ghosn could have transited through a business that was run by his wife.

Carole intends now to try to pressure the French government to do more for her husband whose 108-day imprisonment in Japan between November 19 and March 6 had left him a “different person,” she told The Financial Times in a separate interview.

France’s foreign minister Jean-Yves Le Drian said Saturday he had raised the case during talks with his Japanese counterpart Taro Kono on the sidelines of the meeting of Group of Seven (G7) foreign ministers in the French resort of Dinard.

Le Drian said he had “reminded him of our attachment to the presumption of innocence and the full rights of consular protection.”

Japanese authorities are looking into new allegations that Ghosn transferred some $15 million in Nissan funds between late 2015 and mid-2018 to a dealership in Oman.

They suspect around $5 million of these funds were siphoned off for Ghosn’s use, including for the purchase of a luxury yacht and financing personal investments.

Prosecutors say Ghosn “betrayed” his duty not to cause losses to Nissan “in order to benefit himself.”

Ghosn denies the allegations and says he is also innocent of the three formal charges he faces: two charges of deferring his salary and concealing that in official shareholders’ documents, and a further charge related to investment losses.

The man previously seen as the most powerful figure in the global car industry told French channel TF1 last week that he was “a combative man and an innocent man” and vowed to “defend myself to the bitter end”.

And he voiced concern that he would not be given a fair hearing in Japan where around 99 percent of trials result in a conviction.