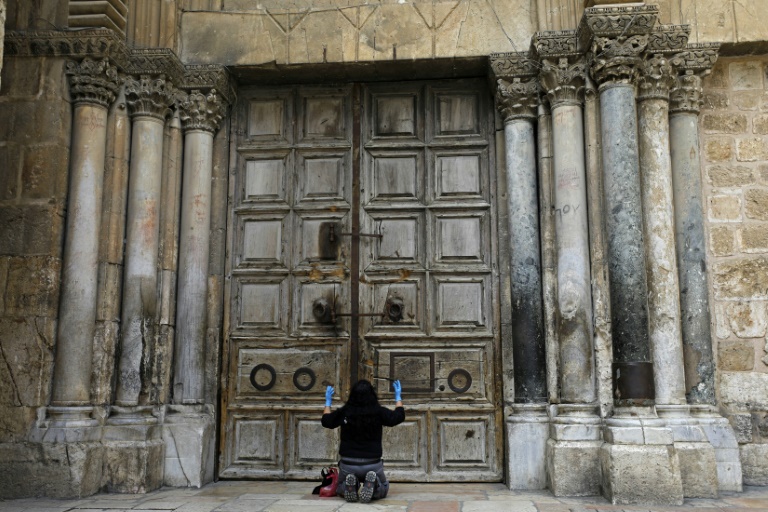 Lockdowns aimed at halting the march of the coronavirus pandemic have extended worldwide as the global death toll mounts and the US outbreak continues to accelerate.

Despite slivers of hope in stricken Italy, tough measures that have confined two-fifths of the globe’s population to their homes are being broadened.

Moscow and Lagos joined the roll call of cities around the world with empty streets, while Virginia and Maryland became the latest US states to announce stay-at-home orders, followed quickly by Washington DC, leaving three-quarters of Americans under some form of lockdown.

A US military medical ship steamed into New York, where it will relieve pressure on the city’s badly stretched health system. A field hospital set up in Central Park was due to go online later Tuesday.

The scale and speed of the US pandemic continued to expand, with the death toll topping 3,000 out of 163,000 known infections — the highest case count for any country.

President Donald Trump sought to reassure Americans that authorities were ramping up distribution of desperately needed equipment such as ventilators and personal protective gear.

But he also offered a stark warning, saying “challenging times are ahead for the next 30 days” as he acknowledged a potential nationwide stay-at-home order.

“We’re sort of putting it all on the line,” Trump said, likening the efforts against coronavirus to a “war.”

The number of confirmed COVID-19 cases around the world is now above three-quarters of a million, with around 37,000 deaths.

The toll on health systems is staggering, with medical professionals under enormous strain.

“Waking up this morning I cried. I cried eating breakfast. I cried getting ready,” French nurse Elise Cordier confessed on Facebook in a post that revealed the fear and anguish of those on the front line.

But, she said, once in “the hospital locker room, I dried my tears. I breathed in. I breathed out. The people in the hospital beds are crying too, and it is I who am there to dry their tears.”

World leaders — several of whom have been stricken or forced into isolation — are still grappling for ways to deal with a crisis that is generating economic and social shockwaves unseen since World War II.

The shutdown has already put millions out of work and forced governments to rush through huge stimulus plans.

Experts in Germany, Europe’s economic powerhouse, said the virus would shrink output there this year by up to 5.4 percent.

The World Bank warned Monday the economic fallout from the pandemic could cause Chinese growth to shudder to a halt and thrust millions of East Asians into poverty.

After weeks of a national lockdown in Italy, signs were emerging that drastic action could be slowing the spread of the disease.

“The data are better but our work continues,” said Giulio Gallera, the chief medical officer of Lombardy, Italy’s worst-hit region.

Italy was due to observe a minute’s silence later Tuesday for victims of the disease.

Spain announced another 812 virus deaths in 24 hours, taking it past China, where the disease first emerged in December.

Even with the US health system stretched, Trump said he was ordering some excess medical equipment be sent to Italy, France and Spain.

Putin’s government was getting to grips with its own outbreak, with the Russian strongman urging residents of Moscow to respect a lockdown that has closed all non-essential shops, and left Red Square deserted.

Anna, a 36-year-old web designer, said the lockdown would be hard for her and her five-year-old daughter. “But I don’t want Arina to get sick,” she told AFP on her way to buy bread. “So of course we will observe the quarantine.”

The lockdowns are causing hardship across the world but particularly in impoverished cities in Africa and Asia.

“Two weeks is too long. I don’t know how we will cope,” said student Abdul Rahim, 25, as he helped his sister sell food from a market stall.

“They need to be fed, but there is nothing to eat,” vegetable vendor Irene Ruwisi said in the township of Mbare, pointing at her four grandchildren. “How do they expect us to survive?”

Image: AFP / MENAHEM KAHANA A woman prays in front of the doors of Church of the Holy Sepulchre in the Old City of Jerusalem following its closure due to the coronavirus