Facebook Twitter LinkedIn
The Islamic State group's affiliate in Egypt has claimed it downed the Russian passenger plane that crashed Saturday in the Sinai Peninsula, where the jihadists are waging an insurgency, killing all on board.
"The soldiers of the caliphate succeeded in bringing down a Russian plane in Sinai," said the statement circulated on social media.
The jet crashed in a mountainous part of Egypt's Sinai Peninsula Saturday, killing all on board, Egyptian security and medical officials said.
The plane with 214 Russian and three Ukranian passengers, and seven crew, had taken off from the Red Sea resort of Sharm el-Sheikh in the south Sinai bound for Saint Petersburg. It lost contact with air traffic control 23 minutes later.
Egyptian security and medical officials said there were no survivors, and that the bodies of the passengers and debris were spread out over an area of 5 square kilometres (two square miles).
The Russian embassy in Cairo said: "Unfortunately, all passengers of Kogalymavia flight 9268 Sharm el-Sheikh-Saint Petersburg have died. We issue condolences to family and friends."
The Egyptian government said 15 bodies had been recovered and transferred to a morgue so far.
The wreckage was found roughly 100 km (60 miles) south of the North Sinai town of El-Arish, Egyptian officials said.
State television reported that Prime Minister Ismail Sharif was headed to the accident scene.
The Kremlin said Russian President Vladimir Putin ordered Moscow's emergency ministry to dispatch rescue teams to Egypt.
Egyptian President Abdel Fattah al-Sisi and his French counterpart Francois Hollande said they had sent their condolences to Moscow.
The Russian emergency ministry published a list of names of the passengers, ranging in age from a 10-month-old girl to a 77-year-old woman.
A senior Egyptian aviation official said the plane was a charter flight operated by a Russian firm, and was flying at an altitude of 30,000 feet when communication was lost.
At Saint Petersburg's Pulkovo airport, anxious family members awaited news of their loved ones.
"I am meeting my parents," said 25-year-old woman, Ella Smirnova, seemingly in shock. "I spoke to them last on the phone when they were already on the plane, and then I heard the news."
"I will keep hoping until the end that they are alive, but perhaps I will never see them again."
A senior Egyptian air traffic control official said the pilot told him in their last communication that he was having trouble with the radio system.
Russian aviation official Sergei Izvolsky told Interfax news agency that the plane operated by Russian carrier Kogalymavia had departed Sharm el-Sheikh at 5:51 am (0351 GMT).
He said the Airbus 321 did not make contact as expected with air traffic controllers in Cyprus.
Communication lost
"Communication was lost today with the Airbus 321 of Kogalymavia which was carrying out flight 9268 from Sharm el-Sheikh to Saint Petersburg," Izvolsky told Russian television networks.
"The plane departed Sharm el-Sheikh with 217 passengers and seven crew members. At 7:14 Moscow time the crew was scheduled to make contact with… Larnaca (Cyprus). However, this did not happen and the plane disappeared from the radar screens."
The flight was scheduled to land at Saint Petersburg at 0912 GMT, he said.
Kogalymavia, which operates under the name Metrojet, says on its website it has two A320 planes and seven A321s, and that it transported 779,626 passengers in the first nine months of 2015, according to the Russian aviation agency Rosaviatsia.
Russia has a dismal air safety record, with charter operators often under pressure to book to capacity on ageing jets in a bid to cut costs. Kogalymavia is a small regional carrier that flies mostly international charter services.
Russia's regional airlines are especially notorious, and the crash is likely to raise renewed concerns about the safety of air travel in a country where experts have sounded the alarm over the ageing fleet of passenger jets.
The last major commercial airliner crash in Egypt happened in 2004, when a Flash Airlines Boeing 737 plunged into the Red Sea after taking off from Sharm el-Sheikh.
The 148 people aboard that flight, most of whom were French, were killed.
Millions of tourists, many of them Russian, visit the resort, one of Egypt's major attractions for holidaymakers looking for pristine beaches and scuba diving.
It and other resorts dotting the Red Sea coast are heavily secured by the military and police, as an Islamist militant insurgency rages in the north of the peninsula, which borders Israel and the Gaza Strip.
Militants in the north who pledged allegiance to the jihadist Islamic State group have killed hundreds of soldiers and policemen since the army ousted Islamist president Mohamed Morsi in 2013.
Tags
Islamic state Russian Sharm El-Sheikh sinai Sinai Peninsula sinai province tourists 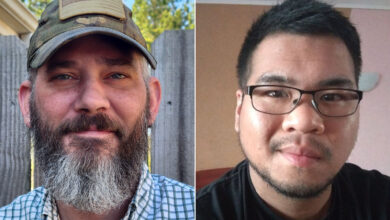 Captured American fighters purportedly held by Russian-backed separatists in Donetsk, one says he was beaten