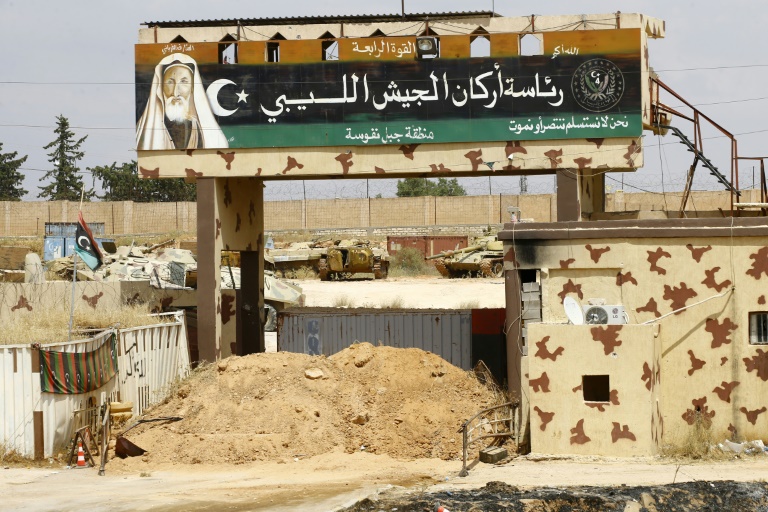 Libyan strongman Khalifa Haftar has threatened to attack Turkish interests and accused Ankara of backing his rivals after he suffered a major setback in his push to take the capital Tripoli.

Anti-Haftar forces that nominally back Libya’s internationally recognized government announced Wednesday they had retaken the strategic town of Gharyan in a surprise attack, seizing Haftar’s main supply base for his months-long offensive.

Haftar on Saturday promised a “tough response” and accused militias backing the Tripoli-based Government of National Accord of executing his wounded troops at the town’s hospital — allegations refuted by both the GNA and authorities in Gharyan.

Dozens of pro-Haftar fighters were killed in the clashes some 100 kilometres (60 miles) south of the capital, with at least 18 taken prisoner, a GNA spokesman said.

AFP correspondents who toured Gharyan were shown signs of a hasty retreat by Haftar’s forces, who left behind their wounded, a command post, arms, ammunition and even food burning on stoves.

“The speed (of the attack), the surprise element and the revolt (by the area’s residents) sowed fear” in the ranks of Haftar’s fighters, General Ahmad Bouchahma, a senior GNA officer, said during a tour of the area.

Among the weaponry the GNA says it seized were US-made Javelin anti-tank missiles packed in wooden crates marked “armed forces of the United Arab Emirates”, a major buyer of American weapons and one of Haftar’s main international backers.

On Saturday, it showed journalists three Javelin missiles and seven Chinese-made Norinco GP6 artillery weapons it said had been seized from Haftar’s base.

“These are a sample that we have obtained permission to bring here,” GNA fighter Ibrahim al-Touil said, adding he could not disclose the total number of such weapons.

The US State Department said earlier it was looking into the find.

“We take all allegations of misuse of US origin defense articles very seriously,” a spokesperson said on condition of anonymity. “We are aware of these reports and are seeking additional information.”

In retaliation for the defeat, Haftar ordered his self-styled Libyan National Army (LNA) to target Turkish ships and companies, ban flights and arrest Turkish nationals in the country, his spokesman said.

The LNA, which holds eastern Libya and much of the country’s south, seized Gharyan two days before launching its offensive on Tripoli in early April.

Its initial lightning advance was quickly brought to a standstill in Tripoli’s southern outskirts as GNA-aligned militias rushed to defend the capital.

Both sides accuse each other of using foreign mercenaries and receiving military support from external powers, despite a UN arms embargo in place since the 2011 NATO-backed uprising that overthrew Moamer Kadhafi’s regime.

Haftar has the backing of the UAE and Egypt and accuses Turkey and Qatar of supporting the GNA.

Turkish President Recep Tayyip Erdogan has confirmed his country backs the GNA and provides weapons to it under a “military cooperation agreement”.

He told reporters on June 19 that Turkish backing had allowed Tripoli to “rebalance” the fight against Haftar.

On Saturday, on the sidelines of the G20 summit in Japan, Erdogan said he had no information on Haftar’s threat against Turkish assets.

“If there is an order like this from Haftar, my colleagues will study (it). We have already taken the necessary measures regarding this anyway, and after this, we will take much more different measures,” he said.

Since the fall of Gharyan, Haftar’s forces have carried out several air raids on Tripoli as GNA fighters push to keep up pressure on the LNA.

On Friday, GNA militias claimed they had launched another successful offensive, this time in Esbiaa, more than 40 kilometers (25 miles) south of Tripoli.

But Mesmari said the attack was repulsed after a “very violent battle”.

Mesmari said orders had been given to the LNA’s air force “to target Turkish ships and boats in Libyan territorial waters”.

“Turkish strategic sites, companies and projects belonging to the Turkish state (in Libya) are considered legitimate targets by the armed forces,” he added.

“All Turkish nationals on Libyan territory will be arrested (and) all flights to and from Turkey will be banned”.

Regular flights to Turkey operate from Tripoli’s Mitiga airport and a second airport in the western city of Misrata, held by pro-GNA forces.

Mesmari did not explain how the flight ban could apply to areas not under Haftar’s control.